Symbols and Observances of Hanukkah

Return to the Guide to Hanukkah for Interfaith Families

Hanukkah, unlike more major Jewish holidays, does not require any days off from work, any major preparation or any long worship services. It is an eight-day holiday that consists mainly of lighting candles, singing songs, eating traditional foods and playing a traditional game. 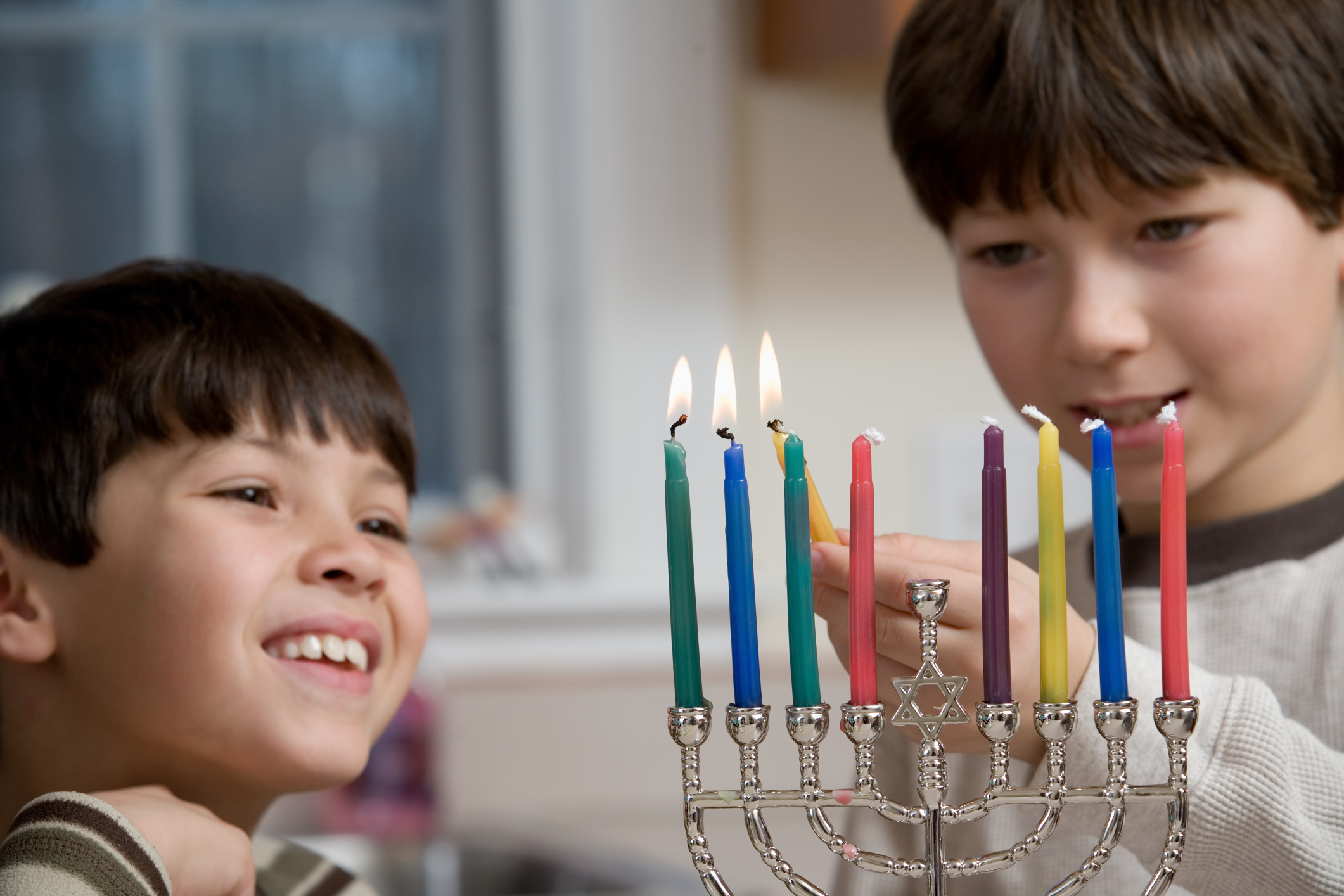 The menorah has receptacles for nine candles, one for each of the eight nights of the holiday, and one helper candle, the shamash, to light the others. Each night of Hanukkah, there is a protocol for lighting the candles. On the first night, the person lighting recites three blessings: a blessing on the miracles that God did for our ancestors, one on the commandment to light the Hanukkah candles and the blessing on reaching a happy occasion, called Shehecheyanu. Then the person lighting lights the shamash, and then uses the shamash to light the first candle on the far right of the menorah.

On the succeeding nights the routine is similar, except that one only recites the first two blessings–the Shehecheyanu is just for the first time one does something in a particular year. On the second night, there are two candles in addition to the shamash: one on the farthest right position, and one more to the left of that. Each night the people lighting add another candle to the left, lighting the candle in the new position first and then the candles that represent the previous nights. By the eighth night, the lamp is blazing away with nine candles. In a family where each member has his or her own menorah, or at a Hanukkah party where a group lights theirs together, this can be a fun, if slightly pyromaniacal, religious practice. (To read the English transliteration of the blessings, and hear the blessings recited, see Blessings on the Menorah on Chabad.org.)

Children can be involved in this practice in many ways, even before they are old enough to safely light candles on their own. Children can make their own Hanukkah menorah; there are many versions of this craft project. In some families the children pick the colors of the candles. Older children can light the candles with close supervision.

Some Hanukkah menorahs have places for oil candles instead of wax ones. These generally have small glass globes. To light them, the person lighting needs to buy specially made wicks. Though regular olive oil will work in an oil menorah, it’s probably safer and more aesthetically pleasing to use the colored oil that Judaica shops sell with these lamps. Some families prefer candles because then they can select very pretty colored ones or beeswax candles.

Once they have lit the candles some observant Jews don’t do any work, observing a miniature Shabbat for the length of time it takes for the candles to burn. Some families have the custom of singing Hanukkah songs after the candles are lit. It’s nice to sit and contemplate the candles in silence, too. The traditional custom is not to make use of the candles for anything work-related, just to look at them. It’s also a custom to place the menorah in a window in order to publicize the miracle to passersby. 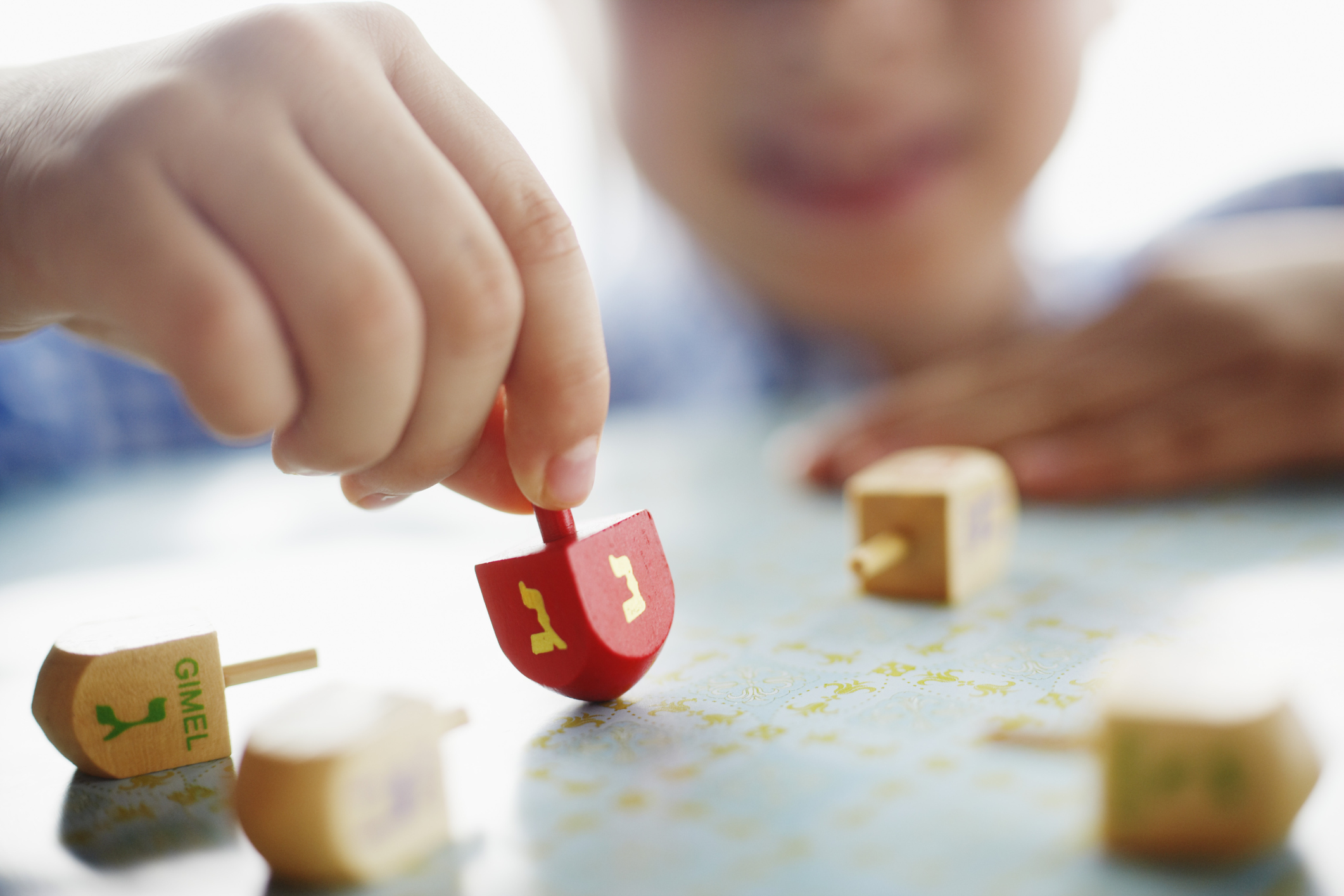 The dreidel is a four-sided top with the Hebrew letters nun, gimel, hey and shin on it, one letter to a side. The origins of the dreidel are shrouded in mystery, which is awfully elevated for something that’s a children’s toy. Though there are nice stories about how the Maccabees played dreidel, the game probably stems from a medieval German and Irish gambling game popular at medieval Christmases before Christmas got all formal and cleaned up. In any case, it’s a fun game that Ashkenazi Jews play at Hanukkah. There are even songs in Hebrew, English and Yiddish about the dreidel.

One facet of Jewish life that seems in perpetual disagreement is how to play dreidel. Everyone knows that there is a pot of coins (usually the chocolate, foil-wrapped kind) or buttons, or another gambling token, and everyone knows that each player spins and has to do something depending on what comes up on the dreidel. The question is, which Yiddish words do the Hebrew letters on the top represent? If the top lands on the letter gimel on your spin, does that mean you get the whole pot because gimel stands for the Yiddish word “ganze” (“all”)? Or do you get nothing, because it stands for the Yiddish word “gornisht” (“nothing”)? This year, when people start arguing, you can turn to the Internet for answers. According to David Golinkin, who wrote about the dreidel in A Different Light: The Hanukkah Book of Celebration, these are the rules: when you get the gimel, you get the whole pot, the hey, you get half, the shin, you put in one piece and the nun, you get nothing. (For images of the four letters, see the entry on dreidel on Wikipedia.)

People who grew up Jewish have sometimes had lots of experience spinning a dreidel, but it’s not hard to learn to do. If you’re a non-Jewish partner in an interfaith relationship and haven’t already mastered the skill, it only takes a little practice and soon you too can be a dreidel shark. If you want to amaze your Jewish relatives with an obscure practice, learn how to spin the dreidel on its stem, upside down. The wooden dreidels work the best for this.

Just have fun and try not to eat all the chocolate before the end of the game.