In recent conversations about the current holiday of Sukkot, I’ve heard a common theme: People understand that we build a hut, known as a sukkah, and that we shake four species, known as lulav and etrog, but they want to know why. “I get that it’s a harvest thing but…” is a trailing thought I’ve heard articulated repeatedly. So, before the holiday comes to a close, here’s my guide to the less commonly known aspects of Sukkot.

“And ye shall take you on the first day the fruit of goodly trees, branches of palm-trees, and boughs of thick trees, and willows of the brook, and ye shall rejoice before the God seven days.” (Leviticus 23:40.) Why these four species? And why does taking them to “rejoice before God” mean “shake ’em!”?

Shake It For Sukkot: The Jewish holiday of Sukkot features the interesting ritual of shaking a lulav and etrog. Wondering what a lulav or etrog is? Wondering what the shaking is all about? Watch this video to find out.

There are a few theories on the origins of this ritual. One is that it’s a vestige of the pagan roots of our ancient religion, relating to fertility. Two more explanations can be found in the biblical exegetical text known as Midrash. One suggests that the four species (comprised of the palm, myrtle and willow (collectively lulav) and the citron (etrog)) represents parts of the body. The palm is the spine, myrtle is the eyes, willow is the mouth and citron is the heart. Together, this shows that we need to commit our whole body to thanking God. This whole-body approach is echoed in the full version of the Shema, a blessing that is recited during every Jewish prayer worship service. Taken from the Torah, the Shema charges us to love God with all our heart, with all our soul, and with all our might. 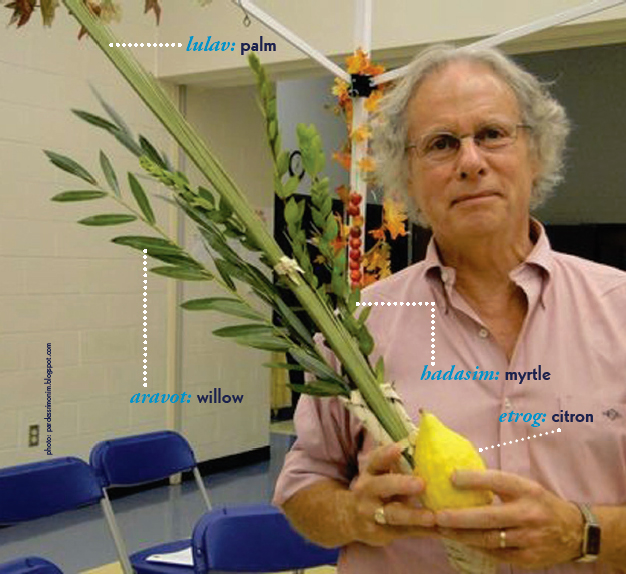 Going with the harvest themes of Sukkot, one suggested reason for shaking the lulav and etrog in six directions (east, south, west, north, up and down — representing all directions) is that all four species require a lot of water to grow, so we are encouraging rain to fall and nourish the harvest. After Sukkot ends, we start including an additional line in one of the central prayers of Judaism, the silent amidah, in which we ask for rains and winds. In Israel, this line is included in the daily prayers from the end of Sukkot through the end of Passover in the spring. In the rest of the world, it’s included December through the end of Passover.

During the daily prayers during Sukkot, with lulav and etrog in hand, Hallel, a collection of six joyous Psalms, are said. Then on Simchat Torah, the holiday that comes immediately following Sukkot (the “eighth day of Sukkot,” if you will), seven circuits, known as hakafot, are taken by the congregation together. It’s like a gradual build, a week of low level rain dance followed by a longer and more intense version.

What’s a Sukkah? A look at the temporary dwellings or huts built for the Jewish festival of Sukkot. What they are, how to build them and more!

Going back to Leviticus, the Torah instructs us to “dwell in booths seven days,” so that every generation will know that the Israelites had to dwell in booths for forty years after the exodus from Egypt (Lev: 23:42-43). During a holiday that is also known as both the Day of Our Rejoicing (Yom Simchateinu) and the Time of Our Rejoicing (Z’man Simchateinu) it’s an odd juxtaposition to build, then eat, sleep, and spend time in, temporary huts meant to remind us of life’s frailty and transience. I’d like to suggest that, while remembering those forty years of wandering, we’re grateful and joyous that we do not have that burden in our lives today.

Tying back into the agricultural harvest festival roots, it is said that the farmers and harvest workers would build huts (sukkot) in their fields. Sleeping out in the fields allowed them to stay closer to their work, saving time instead of having to walk back to their homes at night.

So what does this all mean today? It means we’ve been offered an opportunity to celebrate a festival that comes with some unique rituals and customs. Consider it an modern camping experience. Consider that the end of Sukkot often does coincide with the first rains of the year in Israel. Consider the opportunities for personal and spiritual growth. But most of all, remember to have a good time and be joyous!