Reprinted with permission of JVibe. 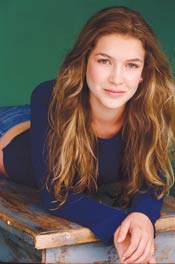 “I love JVibe! My friends subscribe,” Nathalia Ramos said excitedly just before the release of Bratz. Of course, the 15-year-old high school sophomore was even more excited about the release of her first movie, which is now about to get a DVD release. Her part in the movie mirrors her own life–she’s of Spanish (non-Jewish) and Sephardic Jewish heritage and embraces her multicultural roots and traditions. She had a lot to say about that and a few other things that matter to teenagers–school, clothes and boys!

Like Yasmin–the character you play in Bratz–you’re both Jewish and Latina. Was that in the script or changed to reflect you?

It was a coincidence. It was so funny because when I first got the script there were all these Jewish references and I was like, “No way! That’s totally me!” My Bubbie [in the movie] is the perfect mix of both of my grandmothers. In one scene I’m like, “Sasha, come over, Bubbie is making your favorite matzoh albondigas!” One of my grandmas makes matzoh and the other makes albondigas.

The movie is very anti-stereotypical. It breaks down stereotypes. No one would expect me to be from Spain and also be Jewish. My mom is Sephardic. I have both. There are lots of Jewish Cubans in Miami. We call them Jubans. I love that Yasmin comes from a mixed family and that I got to speak Spanish and that there’s the Jewish element.

You were born in Spain and lived in Australia before you moved to Miami, and now L.A.

Yeah, it’s pretty crazy. I was very young when I moved from Spain to Australia, but I go back to visit all the time. I feel like I have three homes. Miami is where all my friends are; that’s where I’ve grown up, and that’s my home. But Australia, I have family there and I visit all the time, so that’s home too. I’m so grateful that I have homes all over the world. I feel a part of each one of them.

How observant are you? How involved are you with Jewish traditions?

I’m very much part of the Jewish community. We belong to a temple right by my house in Miami Beach. We’ve been there since I was four. My brother had his bar mitzvah there this summer. The temple is such a big part of our lives.

Did you become a bat mitzvah?

I didn’t. It was right when I started coming out to L.A. for auditions and was living part-time in L.A. and part-time in Miami. Maybe it’s something to do when I’m older. My mom and I might do it together.

Have you been to Israel?

No. I’m dying to go. I’ve traveled a lot, and I love it. I love learning about different cultures and seeing different places. I want to go to Japan too.

Do you have any favorite holiday memories?

You’re fluent in Spanish–have you considered singing or acting in Spanish?

You did two episodes of “Arrested Development,” but Bratz was your first movie. What was that like?

I had the best time ever. Everyone was so great to work with. It was a blast.

Did the four actresses become close?

We did. I’m the youngest by far. We became so close. I don’t have that many friends in L.A., even though I’d been coming back and forth for projects. They’re definitely the closest friends I have here. We hang out all the time.

You’re in high school–did the clique situation in the movie ring true to you? Is your school similar?

Of course for the movie it was slightly exaggerated, but you see it all the time. I’ve gone to public school my whole life. In Miami, I go to a really big school with all sorts of different people from different places around the world. Now I’m in an independent study program at a local [L.A.] high school where I go once a week and do my schooling on set, and if I’m not working I can go to the actual school.

But whenever I’m not working, I go back to Miami. It’s where all my friends are. I have a great big group. At school everyone goes to their tables, but I’d grab my sandwich and bounce from table to table. I’m definitely a floater. I’m friendly with everyone, and I love that. But I have two close friends who I’ve known my whole life who are like my sisters. One friend gave me a bracelet, and I wear it in every scene of the movie. Another friend came to visit, and he’s in the movie, as an extra.

Do you think there’s a message to the movie?

It has a lot of different messages. The girls are great role models. It shows you the value of true friendship, to be yourself and embrace other people’s differences. You can be friends with everyone. For me, it’s normal–I’ve grown up around many different cultures. But some people aren’t as exposed to it, so it says, “Don’t be afraid to be different.”

It’s a cute little crush. But the guy who plays Dylan, Ian Nelson, is much older than me so he was like a big brother to me on the set. We became so close. Everyone was really protective of me, especially him. His character is deaf, so we took a lesson with a sign-language teacher.

I’m attracted to the more subtle guy, not the obviously popular jock. Also, he has to be really funny and fun and smart, someone who likes to have a good time and jokes around and is really funny. I love actors, but I would never date an actor. I like normal guys.

The clothes were amazing. I got to keep a few things. But I’ve gone through a growth spurt–I’m like 5’41/2″ now–and for press appearances I needed to wear some of the outfits from the movie, so they had to add a little material here and there, but nothing drastic.

I love to wear dresses and heels and be very girly, but I also have my grungier days. I love being in my ripped jeans or skinny jeans and vintage T-shirts. I don’t wear a lot of color. I like black and brown and white. I’m not really about brands. It’s whatever I see and happen to like.

What do you do in your spare time?

All the spare time I get, I go back to Miami. I go back home and hang out with my friends. People ask if they treat me differently or are star-struck, but not at all, they’re the same as they were. They treat me exactly the same. But they’re so excited. They were there when I was being rejected all the time and have heard all the stories, and they’ve gone through everything with me so they feel part of it

What would people be surprised to learn about you?

I have two different ears. One of them has a crease and the other doesn’t. It’s my little secret. I didn’t even know until a girl pointed it out in fourth grade. Everyone would make fun of me for it and call me “Leprechaun.” I would go home crying every day. My mom even took me for a consultation with a plastic surgeon to get it fixed, but we decided to wait because I was really young. And then I got used to it, and now I love it and I don’t care. It’s my distinguishing feature. I want to tell girls to embrace your differences. Don’t be ashamed. Nobody’s perfect.

What’s next for you?

I’m looking into different movie roles and singing. I would love to come out with an album. I write songs as well. Pop rock. I would love to do something in Spanish. And I’m going to stay in school and finish my studies and go to college. That’s so important to me. I love history and government and politics, and I’m into writing–I was in the journalism club at school. But I’d love to do another film.

How about a Bratz sequel?

If there’s another one, I am so there! We’ll see what happens, but I’ll be a part of Bratz as long as it goes.