Shavuot: Days of Cheese and Roses

Themes and Practices: Joining a Community By Affinity

Shavuot was a pilgrimage holiday in ancient times when there was a Temple in Jerusalem, one of three such festivals. (The other two are Sukkot and Passover.) Shavuot was the holiday of donating the first fruits to the Temple. It came to be associated with the Jewish people receiving the Torah. The Torah instructs people to count the 49 days from Passover to Shavuot. Perhaps this is to tie the idea of liberation to the idea of covenant. If we aren’t free, we can’t choose to receive the blessings of the Torah. In this holiday we re-enact being part of a community that chose to come together.

Because Shavuot is a celebration of the giving of the Torah at Mt. Sinai, it’s traditional to read the Book of Ruth. Ruth was a Moabite woman who intermarried into an Israelite family who were living in her country. When her husband died and her mother-in-law decided to go back to the Land of Israel, Ruth threw in her lot with her mother-in-law, and with the Israelites. Many commentators have called Ruth the first convert. Like the Israelites receiving the Torah, Ruth makes a free choice to join the Jewish people.

It’s remarkable to me that Ruth models the experience of a member of a Jewish family who is not Jewish in biblical times—there’s nothing in the text to suggest that she became Jewish before she married her first Jewish husband. It’s after her husband’s death that Ruth makes her declaration to her mother-in-law Naomi that suggests a ritual of conversion to us, “Thy people shall be my people, and thy God, my God.” Ruth had experienced so much acceptance from her mother-in-law that she chose to live with her in poverty rather than to return to her own family. Of course the story has a happy ending—Ruth marries a wealthy cousin of her husband’s and lives happily ever after. At the end of her story, we learn that she was the great-grandmother of King David.

The Reform movement developed the custom of holding confirmation ceremonies for teens on Shavuot. These ceremonies echoed both the experience of the Jewish people at Mt. Sinai and the conversion experience of Ruth. Many synagogues still do confirmation. I was confirmed in a white robe, holding a bouquet of roses.

Mainstream Jewish congregations have also begun to reclaim the mystical practice of staying up all night studying on Shavuot, called a Tikkun Lel Shavuot. In addition to the spiritual benefits of this practice, it’s a lot of fun to stay up with people and get to know them. Like a college all-nighter with adults, a tikkun is a great time to bond and to learn new things.

The Food: Blintzes and Other Cheesy Things

It’s traditional to eat dairy foods on Shavuot. One of the main reasons that I’ve heard for this is that when the Jewish people received the Torah at Mt. Sinai, they also got the kosher laws, and they realized that their methods of slaughtering and preparing meat were not kosher. Since they also learned from the same kosher rules that meat and milk shouldn’t be eaten at the same meal, they naturally made dairy meals.

It could also be because of the biblical verses that say the Land of Israel is flowing with milk and honey.

Now, of course, you can have wine and cheese for this holiday. There’s nothing particularly Jewish about baked brie with almonds on top and fruit and a baguette, but that would be a great little meal for this holiday. You can recite Ha-Motzi over the baguette and Kiddush over a dry white wine. Or you could decide that because it’s the holiday of first fruits that you must have strawberries and asparagus. Or try something like this:

The original version of this recipe came from an Italian cookbook my aunt and uncle gave me, The Complete Book of Salads by Alessandra Avallone (New York: Gallery Books, 1988.) It’s a nice recipe because you can get either local goat cheese, depending on where you live, or imported Israeli goat cheese.

Mash the goat cheese with salt and pepper to taste. Roll into balls that are about the size of grapes and sprinkle the balls with paprika before you put them into the refrigerator to harden. Clean your greens and tear them. (The original recipe calls for escarole, but you can use whatever you like–dandelion greens or arugula would be exciting.) Mix dressing. Dress the salad and put a little on each person’s plate, with grapes and cheese balls alternating and nuts on top. 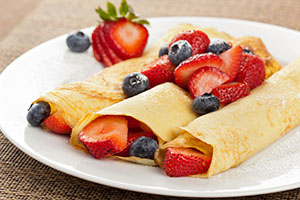 I admit that I’ve only made blintzes, the most popular Shavuot food, from scratch a few times. It’s not difficult to make them, but it’s a lot of fuss to make all the thin pancakes and then fill them and fry them again. Usually I get the frozen ones and either bake or fry them depending on how hot it is outside. One advantage to using the frozen ones is that they come in non-dairy flavors, like blueberry or cherry. (Yes, I know, that’s kind of ironic, looking for non-dairy versions of dairy food for the dairy food holiday. I’ll bet some of you are lactose-intolerant, too.)

My mother has given me her grandmother’s blintz recipe, which I’m sharing with you here.

Combine beaten eggs, milk and salt. Add gradually to flour. Beat until smooth. Heat heavy skillet (about 6″ size preferable) and grease lightly with butter. Pour only enough batter to make a very thin pancake, tipping pan from side to side to cover bottom. Bake on one side only until it blisters. Toss on a cutting board, fried side up.

Mix all ingredients together until smooth and place a well rounded tablespoon of mixture in center of blintz. Fold over both sides toward center and roll into envelope shape. The un-fried side of the pancake should be on the outside of the filled blintz. Fry on both sides.

If your stomach can’t handle farmer’s cheese, you can make a lovely fruit filling. Canned pie filling will also work.

Cook fruit in a saucepan for five minutes. Add lemon juice. Sprinkle in the flour. (You can shake it through a wire-mesh strainer onto the fruit if you want.) Stir for 10 minutes or until the fruit thickens. Add sugar to taste.

I copied this from The Vegetarian Times the first time they published it in 1998. Now it is available on the Vegetarian Times website. I have a few tweaks–no almond butter or almond extract, because I have friends who like this cake who are allergic to nuts–but I must acknowledge that I owe a lot of happy Shavuot eating to the person who figured this out. I love the taste of cheesecake, and this recipe has it. 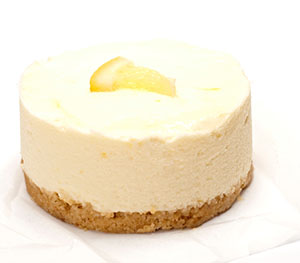 If you don’t have pre-ground graham cracker crumbs, it usually takes two wrapped stacks or half a box of crackers whirled in the food processor to make the two cups for the crust. Mix cracker crumbs, syrup and extract until crumbs are moistened. Pour into oiled 9-inch pie plate; press mixture firmly to form crust. Bake 5 minutes; let cool while preparing the filling.

In food processor or blender, combine remaining ingredients and process until smooth, about 30 seconds. Pour mixture into crust. Bake until top is slightly browned, about 30 minutes. Cool and refrigerate until thoroughly chilled and firm, about 2 hours.

You can top this with strawberries sliced in half, just like with a dairy cheesecake.