Our CEO Ed Case is attending the Central Conference of American Rabbis (CCAR) in San Francisco. The CCAR is the rabbinic association of the Reform movement. I look forward to his opinions on the presentation of the CCAR task force on intermarriage. News reports, including this one in the [i]New York Times[/i] suggest a slight shift on the issue. The panel proposed that Reform rabbis work on encouraging interfaith couples to stay in the Jewish community instead of trying to prevent interfaith marriage.

Since 1983, the Reform movement has recognized children of interfaith families as Jewish if their parents raise them as Jews–whether the Jewish parent is the mother or the father. This has brought many more interfaith families into Reform congregations, making it the largest of the Jewish denominations in the United States, which is the largest Jewish community in the world. Reform congregations have been working for years on integrating interfaith families and their children and finding ways to honor non-Jewish spouses who support Jewish family members’ practice of Judaism.

If you’re a member of a Reform congregation, what has your experience been? Does your rabbi make your whole family feel welcome? How about the rest of the community? 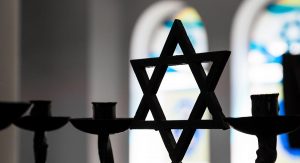