One way Jews celebrate the New Year at Rosh Hashanah is by eating symbolic foods. Sweetness is one of the themes of the holiday, and it’s traditional to eat sweet foods, like apples dipped in honey, on Rosh Hashanah. Some Jews avoid eating sour or bitter foods.

According to Rabbi Gil Marks in The World of Jewish Cooking, “On Rosh Hashanah, the performance of symbolic acts is of special value in reflecting on the past and pondering the future.” The Talmud and other Jewish texts give lists of foods that are auspicious to eat as we enter a New Year. Rabbi Marks graciously shared with me the names and explanations of five foods that Jews have traditionally eaten because of a punning similarity between their names and some other words that signify a wish for the coming year.

Pumpkin or gourds: The Hebrew word for gourd, kraa is similar to yikaru, “to be called out” symbolizing a desire that our good deeds be called out at the time of judgment.

Leeks : Karsi is the Hebrew word for leek, which sounds like the word yikartu “to cut off/destroy,” signifying that the Jews’ enemies should be cut off.

Beet greens: The Hebrew word for beets is selek, which sounds like yistalek, “will be removed”–so that we can wish our troubles will be removed.

In addition, Jews eat a new fruit on the second night of Rosh Hashanah. Pomegranates are a favorite choice because they are said to have 613 seeds, just as the Torah has 613 mitzvot. Hopefully the New Year will be filled with as many good deeds as there are seeds in a pomegranate. Here are some new ways to use some of the auspicious foods to help you usher in a Happy New Year.

This favorite way to use apples and gourds (pumpkin) goes back more than 20 years to one of my first cookbooks (Sheilah’s Fearless Fussless Cookbook).

Preheat oven 350°F. Cut the top off the pumpkin, leaving a nice slice for the lid.

Place the pumpkin in a large shallow baking dish and scoop out all the seeds (these may be baked separately and used for a nutritious snack).

Combine the remaining ingredients in a medium saucepan, and bring to a boil.

Bake for 45 to 55 minutes, or until the apples are tender.

When serving, be sure to scoop out some of the pumpkin meat. This dish can be served hot or at room temperature.

HINT: Heat and air can cause raisins to dry out, and humidity will cause the sugar in the fruit to crystallize, so store your raisins in an airtight bag or container and keep in the refrigerator.

Soak the bulgur wheat according to the package instructions, then drain, squeezing well to get rid of excess moisture.

Beat the oil, lemon juice, salt and pepper and mix into the bulgur. Put in the bottom of a glass serving bowl.

Layer ingredients in this order, from bottom to top: the spring onions, chickpeas, parsley and carrots. Cover and refrigerate. Toss the salad just before serving.

Amy Riolo, my friend and fellow cookbook author and cooking teacher, loves to make these almond-stuffed chocolate-covered dates from her book Arabian Delights (Capital Books). She told me that when choosing dates for this recipe, look for those that are slightly firm to the touch but not too hard. Most Medjool dates sold in major supermarkets work fine. Keep in mind that the amount this recipe yields will vary depending on the size and weight of the dates. Using a candy thermometer will ensure that the chocolate hardens properly.

Split each date lengthwise 3/4ths of the way through, being careful not to cut the dates in half, and remove the pit. Stuff each date with an almond. Press the seams of the split together to close the date.

Melt chocolate in a double boiler over low heat. Be careful not to let the water in the bottom of the boiler touch the bottom of the top pan. Let the chocolate melt and keep it over low heat until it reaches 113°F; check the temperature with a candy thermometer. Remove the pan of melted chocolate from heat. Set the warm pan over a bowl of cool water to bring its temperature down to 88°F.

Line the counter with wax paper, and place a cooling rack on top of the paper.

Using tongs to handle the dates, dip each date into chocolate. Place chocolate covered dates on the cooling rack. Cool dates 1 to 2 hours, or until chocolate is set.

Transfer dates to a serving platter and store in the refrigerator until ready to use.

Sheilah Kaufman is a traveling cooking teacher and author of 25 cookbooks. 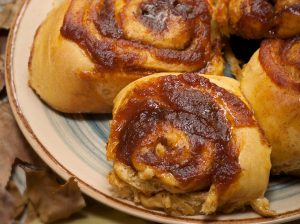