When friends and family come over for Shabbat dinner on Friday night, the table is always full of my go-to Shabbat dishes like shortcut jeweled rice and brisket in a homemade Japanese barbecue sauce. And always, without fail, there’s way too much challah.

When we first started celebrating Shabbat together, I’d wake up to my sweet husband clinking around the kitchen making us French toast with the leftover challah. Bryan doesn’t cook, and so it took everything in me to finally tell him one day that I don’t really like French toast.

Having grown up in a Japanese American household with a Japanese mother who loved to cook, every meal (including breakfast!) was savory. To this day, I need something savory in the morning. So I began imagining a savory dish that would incorporate day-old challah. What I came up with is essentially a savory French toast with everything bagel and lox ingredients mixed in.

Note that you can customize this recipe for any amount of challah you have left. On this particular day, I had A LOT of challah, so the recipe below serves 12. Here’s an easy formula to follow: 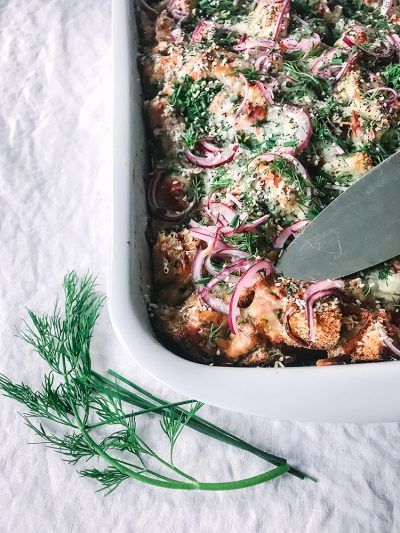 1. For the pickled red onion: Thinly slice 1/4 of a red onion. Place it in a bowl with 1/2 teaspoon salt, 1 tablespoon of honey and 1/2 cup vinegar (white wine, rice and apple cider all work–anything light in color). Let it pickle while you prepare the rest of the strata.

3. Fill the baking dish with the cubed challah.

4. Place milk and eggs in a large mixing bowl and whisk until well incorporated.

6. Pour this mixture evenly over the cubed challah. You may need to push the challah down into the liquid to make sure most of the pieces are soaked through. Fluff it back up so the top layer looks nice and there are no holes where the challah was pushed down.

7. Cover the strata in foil and bake for 20 minutes.

8. Remove the foil and sprinkle the strata with remaining mozzarella, grated Parmesan cheese and everything bagel mix. Bake for another 20 minutes. Check on it often to make sure the cheese isn’t burning (it should be golden brown). To test for doneness, remove the pan from the oven and give it a shake–if it doesn’t jiggle, it’s done.

9. Sprinkle with remaining dill and pickled red onions. Let it rest for five minutes and serve while warm.

You can prepare everything up until step 8 the night before. Simply remove it from the fridge 30 minutes before baking.

For another idea on what to do with day-old challah bread, check out kabocha pumpkin soup with challah croutons. 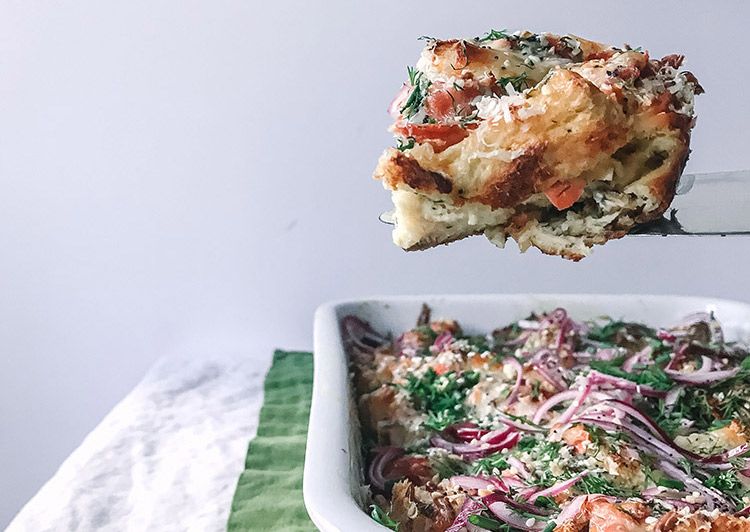