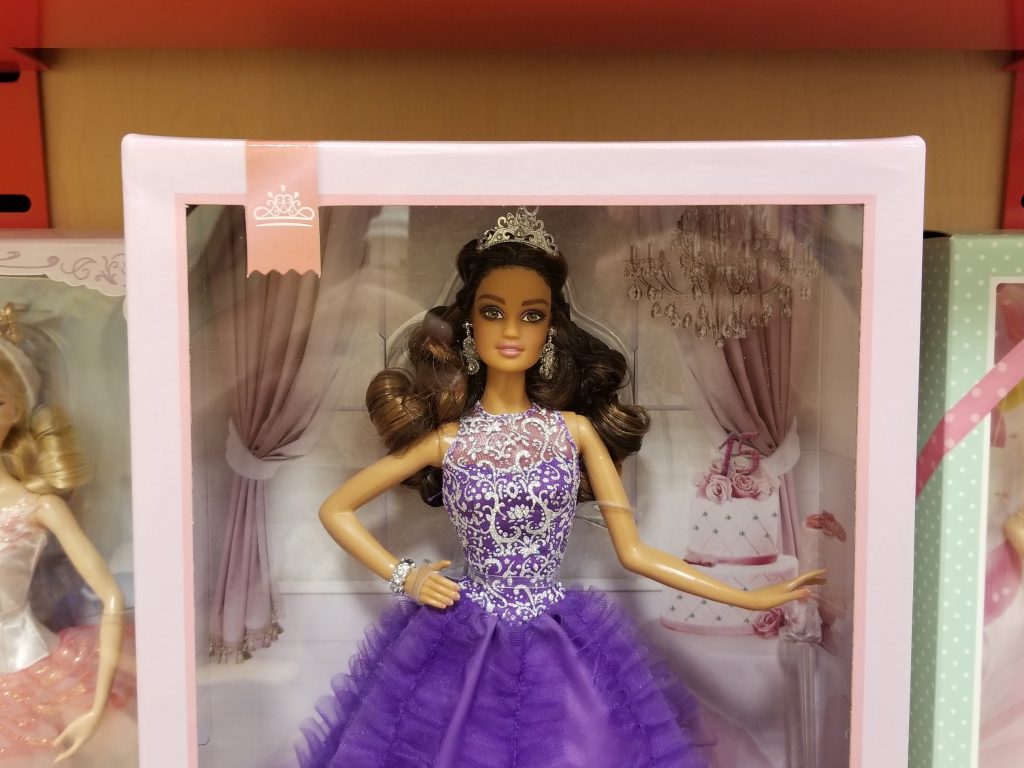 It’s been two weeks of vacation for my family in upstate New York. Nothing but fun, sun, relaxing walks by the lake, fishing and Quinceañera Barbie. Wait…what!? Here’s how Quinceañera Barbie came into my life.

Both of these ceremonies celebrate the move from girlhood to adulthood. At a bat mitzvah, a girl may read a portion from the Torah in synagogue and then have a big party or sometimes, it’s just a big party. At a Quinceañera, there is a traditional dance that the girl does with a childhood doll. When the dance ends, the girl must give the doll away and then she is considered a woman. That dance usually takes place during a big party. Mostly, I believe these questions are brought up from both families because it’s a hint that we should start saving money now, even though my daughter is just 2 years old.

I hadn’t given much thought to bat mitzvahs or Quinceañeras. I’ve been enjoying the part of my daughter’s childhood where every moment and every new discovery feels like one big party. She finds bugs and runs through outdoor sprinklers on our vacation. She chases birds and learns new words in both Spanish and English: boat, burro, cook and hola. But, one day it starts to rain and so instead of having our usual barbecue by the water, we take her to a Barnes and Noble in town so that she can run through the kids’ section.

Her first choice in toys when we get there is a train set that’s been set up in the corner. But she quickly tires of the train set after she realizes there are other toys in the store. She reaches for Peppa Pig, Elmo, Cookie Monster and Big Bird. She brings each toy over to me. She smiles and then runs to get another one. Finally, I spot her holding a large cardboard box with a doll inside. The doll’s skin is the same cinnamon tint as my daughter’s. The doll is wearing a long purple gown and at the bottom of the plastic that encases her, it says, in shiny silver letters, “QUINCEAÑERA BARBIE.” Oh help me.

I never had a Barbie. I didn’t really want one. My brother was older than I was and he had G.I. Joes and all kinds of science toys so I veered more toward those. The only time I played with a Barbie was when I was at someone’s house for a play date. Once, at my friend Aviva’s house, I took her favorite Barbie and shoved its head into her parents’ whirlpool (a machine used to make the bath into a jacuzzi…it was the ’80s) in the bathtub. I’m pretty sure I broke the whirlpool when Barbie came out but her head stayed in. Her father spent two hours trying to shave Barbie’s hair off to get her golden locks to break free from the whirlpool.

As my daughter ran off to get another doll, I wondered why there was no Bat Mitzvah Barbie. I imagined what she would look like—complete with her Torah scroll and equally shiny dress. As soon as my thoughts began to wander, I looked up everything having to do with Barbie dolls. What I found out shocked and surprised me.

Ruth Handler, who was the Jewish daughter of Polish immigrants, invented the Barbie doll. She actually thought of the idea after she saw her daughter playing with paper dolls. As I read up on her, I found out how she became one of the most successful business women in history. I then thought of the hilarity of my own situation. Barbie, even the Quinceañera Barbie, is Jewish! She’s not only Jewish but she’s interfaith—an interfaith Barbie! Her original creator is a Jewish woman named Ruth Handler and her identity in her current costume is that of a Catholic Latina girl about to enter womanhood! I’ve now become obsessed with the idea that any Barbie doll sold on the shelf of a toy store today is part Jewish.

I didn’t purchase Quinceañera Barbie only because my daughter doesn’t really know how to play with her yet. However, I do know that when my daughter is older and has questions about her two faiths, I will use Quinceañera Barbie as a model of something that incorporates a rich history of Judaism, Catholicism and invention. After all, as an interfaith child of a Jewish mother and a Catholic father, reinvention is something we are very familiar with.