When we started our daughter at a Conservative Jewish preschool, I knew there would be a learning curve—after all, I was a lapsed Catholic and my husband’s memory was a bit rusty on the finer points of Judaism.

September and all the holidays came and went. For the most part, there was little impact on our daily lives; we just didn’t have school and we didn’t attend services. We did have some special dinners with friends, but that was the extent of it. It wasn’t until March that a holiday caught the attention of my 4-year-old: Purim. Purim? I had never heard of it. I also had no knowledge of other holidays like Tu Bishvat. 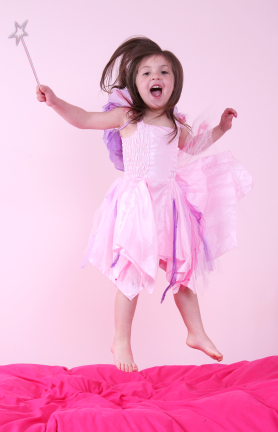 Purim is, basically, from the Book of Esther: There was a king named Ahasuerus who was married to Queen Esther. When the king was convinced by his prime minister (the evil Haman) to kill all of the Jews, Queen Esther’s cousin Mordecai (who had angered Haman by not bowing to him) had her reveal that she was Jewish. The king canceled his edict, the Jews were saved and Haman was put to death instead. The basic celebration includes noisemakers and costumes, giving Purim baskets to other families and alcohol (but not for the preschool set).

How did we celebrate this in preschool, and why did it resonate at home? The simple answer is because it is a loud and joyous celebration with costumes. All of the girls just changed their usual Disney princess wear to dress up like Queen Esther and the noisemakers were particularly popular with the boys.

That brings us to one morning before school when my daughter insisted on dressing up in dress-up clothes (nothing new here) and having a Purim parade. Okay… I was game, but it was really adding to our hectic morning. And, of course, it had to include noisemakers, too. So my daughters (ages 4 and 1) and I marched around our downstairs in rather princess-y finery with noisemakers in hand (graggers are the traditional noisemakers for Purim, we settled for musical instruments from the toy box).

In the middle of this loud and chaotic morning, a good friend called, and I told her what we were doing. She laughed, “Re-thinking that Jewish preschool much?” (Her daughter was in a different Jewish preschool.) I smiled and sighed—she had read my mind. I was thinking that if my daughter had not known about Purim, I would not be running a parade at 8 a.m. It’s hard enough to get out of the house in the morning without adding a parade!

The Purim Carnival at the Temple was that same week and it was lovely. Parents and children gathered in the Temple, where there were different activity stations. We did arts and crafts, face painting, played games (fishing in a dry wading pool with magnetic fishing poles for fish, ring toss, etc.) and, of course, dressed in costumes with noisemakers. I had volunteered to run a craft table; it was a fun afternoon.

Little did I know that volunteering for the Carnival would lead to a thank you from the Temple. With incredible timing that usually only happens in fiction, my in-laws were visiting when a letter from the Temple came, thanking me for volunteering at the Purim Carnival and asking me to open the ark on the second day of Rosh Hashanah.

“I can’t,” I said, eyes downcast to hide my thrill of this timely letter, but also proudly showing off my Jewish Stamp of Approval to my in-laws. Your son didn’t marry someone Jewish, but look at this—the Temple wants to give me an honor for helping with a Jewish festival—it is a prize!

My mother-In-law, beautifully dressed and coiffed as always, sat playing with my children, “You have to,” she told me, thinking it was an insult to not accept and maybe no one would know that I wasn’t Jewish. Maybe this was wishful thinking.

“She can’t,” said my father-in-law, thinking it was not going to be okay for most of the congregation if I did accept. After all, this was a Conservative synagogue, and my in-laws had long belonged to another Conservative temple in their town.

“It’s an aliyah,” said my mother-in-law, proud of me for having been offered the honor, and never one to hurt anyone’s feelings.

I was flushed—with pride, embarrassment and not a little dread. I had an etiquette problem involving a religion not my own. I was terrified to insult anyone at the Temple by not accepting, but even more terrified that accepting would be, well, unacceptable.

For years, the Rabbi has cut through our backyard to go to Temple. He knows I am not Jewish, that we are not even Temple members, but the office who sent this out only knew my name as a parent volunteer. (And really, how many people who aren’t Jewish probably volunteer at Purim carnivals? Statistically, probably only me.) All I could think of was being exposed as an imposter; “Shiksa on the Bima” ran through my head. And then I finally noticed that there a box I could check to thank them for the honor but decline. Whew. That was a little stressful.

My husband’s wry comment was, “It’s not such a big deal, it isn’t as if it was the first day of Rosh Hashanah—now that would be a big deal.”

I am glad that our children have been exposed to a variety of celebrations of holidays—some less work than others—and continue to keep learning and sharing traditions as we go.

We haven’t had a Purim parade since, but maybe we will have another this year.

Nancy Thompson Brown is a stay-at-home mom with two lovely children and a wonderful husband. She almost always has her nose in a book but more often now you will find her on the computer. She blogs at www.capabilitymom.com. The Browns have been creating and reinventing their own traditions in an interfaith family for almost 18 years.