In order to get some pumpkin flavor in every bite, I used two types: pureed and seeds. The pumpkin puree gets mixed into the filling along with some other seasonal flavorings (brown sugar and cinnamon), and the seeds get chopped and incorporated into the topping. Not your average kugel, but perfect for the double holiday. 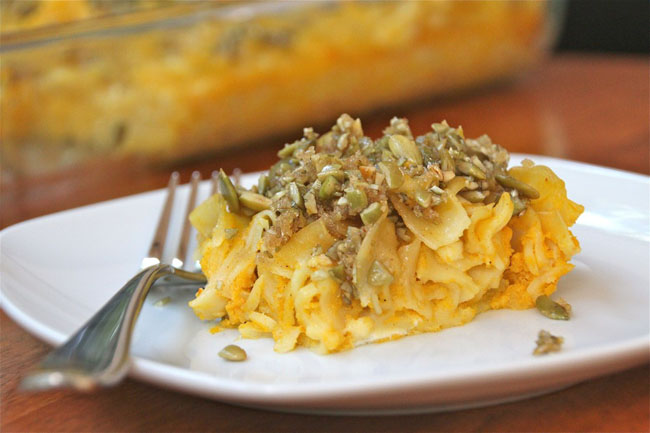 2. FOR THE TOPPING: In a medium bowl, stir together all topping ingredients. Set aside.

3. FOR THE FILLING: Bring 4 quarts of water to a boil in a large pot. Add 1 tablespoon salt and the noodles. Bring back up to boil and cook until almost tender but still a little firm to the bite, about 6 minutes. Drain noodles and transfer to large bowl. Toss with 1 tablespoon butter and allow noodles to cool.

Other Holiday Food, Recipes, Side Dish

Mari Levine is a freelance food writer and an editor for America’s Test Kitchen, where she combines her journalism and culinary degrees from Brandeis University and Johnson & Wales, respectively, with her restaurant and lifelong eating experience. When she’s not working hoisin sauce into everything she eats or binging on anything sandwiched between two slices of bread, she can be found on her bike, engrossed in a documentary, or playing sports that involve throwing and/or catching a ball (the latest: flag football).