This article is reprinted with permission from Jewish Family & Life: Traditions, Holidays, and Values for Today’s Parents and Children (Golden, 1997) by Yosef I. Abramowitz and Rabbi Susan Silverman. 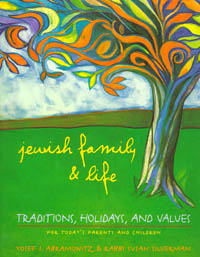 Passover is the strictest of holidays when it comes to food. Although the rules of Passover differ greatly according to local communities and families, there are several practices that are followed by most Jewish people in some way.

Regular kosher food is not enough. Passover foods are labeled Kosher for Passover, although most unprocessed fruits and vegetables are permissible.

Significance of Unleavened Bread on Passover

When the Israelites had to pack their things quickly for the long trek in the desert, they did not have time to let their bread rise. So in memory of the hasty exodus, we eat unleavened bread (matzah) for eight days and we abstain from chametz (literally “vinegar” but used to refer to all foods not kosher for Passover such as bread products and foods made with yeast).

To prepare for Passover we rid our homes of any items that are not Kosher for Passover. This is usually done by cleaning out the refrigerator and the entire kitchen and putting many dry items in an out-of-the-way cabinet which is then taped up. The custom is to “sell” anything that would represent a major financial loss (ranging from your liquor cabinet to your family bakery) if you had to get rid of it. These items are “sold” to a non-Jewish friend or neighbor, so even though it’s on your property, it’s not technically yours. Then after the holiday, you “buy” it back.

Then you clean, clean, clean. The kitchen gets most of the attention, although we have a pious friend in Israel who airs out every book in her home in case there should be any bread crumbs in them. In the kitchen, the stove usually gets a lot of extra scrubbing. Special pots, pans, dishes, and utensils that are used only on Passover are brought out (once the kitchen is ready) for use in preparation for and throughout the eight days.

The day of Passover is filled with preparing and cooking, a strain at any time. On this day also it is traditional for the firstborn in a family to fast in memory of the firstborn Egyptians who perished in the final and most perilous plague. For Yosef, this is the hardest of the fasts because he is cooking all day.

Customs and Rituals for the Seder

Then, finally, the Seder. Light two candles and say the candle lighting blessing for the holiday. It is an obligation to drink four cups of wine or kosher grape juice, read the Haggadah, dip various vegetables in saltwater, partake of the Afikomen that had been hidden and recline comfortably at the Seder table.

There is no schoolwork or business the first two and last two days of Passover because it is a major eight-day festival. The days of yom tov (yontif in Yiddish) are like Shabbat, and the chol ha-moed (middle days) of the holiday are regular days except for the food regulations. It is also customary to attend a Yizkor (memorial) service in synagogue n the last day of Passover.

Yosef Abramowitz was the founder and CEO of Jewish Family & Life!, based in Newton, Mass.