The food we serve at the Passover meal also can tell our own family stories through recipes that have been passed down through the generations reflecting both traditional Jewish foods and foods from other cultures reflecting everyone at the table. 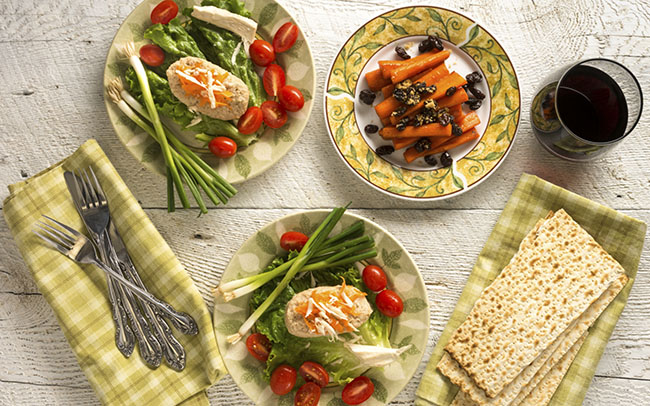 The biblical story of the exodus (Jewish liberation from slavery in Egypt) is recounted at a Passover seder, a celebratory meal, through lectures, gatherings and traditional foods.

Certain foods are prohibited during Passover. Those following traditional rules will even refrain from keeping these forbidden foods in their homes.

The various rules and customs can be daunting for a beginner. Even frequent attendees at Passover seders do not have a single way of celebrating the holiday, especially in America where diversity among the Jewish population is greater.

A few key foods and rituals are included in many Passover seders, such as brisket, matzah (unleavened bread), tzimmes, gefilte fish, a seder plate, and the reading from a Haggadah, the book that is recited at the seder.

While these customary practices are usually present in all seders, ultimately it is family traditions that dictate the event.

Some households are more traditional and enjoy hours of reading the Haggadah in Hebrew prior to the Passover meal. Other families prefer a more casual environment, move through select English readings and make the food the primary event.

Some families finish the seder with popular Passover desserts (see below), whereas others proceed with music, stories and blessings well into the night.

Kosher laws specify which foods can and cannot be consumed, as well as how such foods should be prepared and handled.

Not every Jewish person follows these food laws (called kashrut) by only consuming kosher food on Passover. However, many do find meaning in this tradition.

The kosher rules during Passover are even more strict than the typical rules which dictate separating milk and meat products. For instance, kosher for Passover forbids any food that is deemed chametz, or “leavened.” This rule excludes any food produced from wheat, oats, barley, rye, and other and spelt (the five grains).

That might not seem so bad, but this effectively excludes popular food such as pasta, bread and most desserts from being served. Kosher for Passover also leaves out beer and other alcoholic beverages, leaving wine (supervised during production) as the only alcoholic beverage accepted to drink.

Passover foods are alien to many people who have not celebrated the holiday before. All families have different traditions, but there are some foods common to most Jewish households in the United States–particularly Ashkenazi (Eastern European) Jews. We have lots of Passover recipes available on our website.

For recipes for many of these dishes (and more), see our Passover Recipes index.