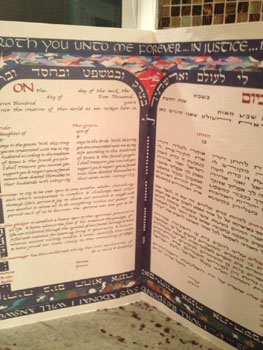 Sometimes Jews who don’t live their lives by the rubrics of Jewish law feel inauthentic in their identity or less Jewish than more observant Jews. I often hear phrases like, “we weren’t that religious” or “we were very Reform” to describe an upbringing that did not include regular synagogue attendance or Shabbat rituals, for instance.  Sometimes a person who marries a Jew not concerned with Jewish tradition as it applies to food, prayer or holiday observances can be confused when that person wants a rabbi at his or her wedding and wants to raise Jewish children because it doesn’t seem the person cares that much about being Jewish.

There are many ways into Judaism and many ways to practice one’s Judaism.

Sometimes Jews are worried about “doing it wrong” or not following the tradition (as if there is only one) at major life cycle moments. For instance, in preparing for a wedding, many people are concerned with who can sign their ketubah. I explain that “traditionally” it would be people who are Jewish and not related to the couple but that since this is a “non-halachic, not legal” ketubah signed by a bride or groom who isn’t Jewish that they should pick witnesses who they trust and wish to honor and worry less about whether that person is Jewish and related to them. Sometimes brides or grooms are worried about wearing a yarmulke at their wedding when they don’t intend to wear one regularly again. They have to pause to ask themselves why they would want to wear one on their wedding day, what it symbolizes to them and then see if it feels meaningful.

Some of my colleagues have recently been discussing whether they should write that the couple is getting married on Shabbat in a ketubah (even if the wedding is before sundown on Saturday which is still Shabbat) since it is not traditionally thought permissible to hold a wedding on Shabbat. I feel very strongly that if the wedding is on Shabbat that the ketubah in an unapologetic way reflect that by stating the accurate day of the week in both English and Hebrew (rather than writing “Sunday”). This couple and this rabbi must not be accustomed to keeping Shababt in ways that prohibit driving, exchanging money, etc. and thus getting married on Saturday evening fits with their Jewish expression.

In fact, Rabbi Eugene Mihaly who died in 2002 at the age of 83, a professor at Hebrew Union College, the Reform Rabbinical Seminary wrote about whether marriage on the Sabbath is allowed according to the Jewish rabbinic sources.  He concluded that:

“A religious marriage ceremony is a profound spiritual experience. The goals of Sabbath observance for the Reform Jew are also based on the traditional themes of the Sabbath as a day of delight (oneg), of refreshment of soul, of perfect freedom, a day devoted to hallowing of life, the enhancement of person, a weekly projection into the messianic. The spirit of a religious marriage ceremony is thus in perfect consonance with the spirit of the Sabbath. Halachic (legal) tradition, liberally interpreted, as it must be by Reform Judaism, far from prohibiting a marriage on the Sabbath would, on the contrary, encourage it as a most appropriate and fitting activity, congruent with and an enhancement of the highest reaches of Sabbath observance.”

We have a tendency as Jews to put a hierarchy on Jewish practice and observance level. When one is able to learn about Judaism and then live it in a meaningful, thoughtful way, it becomes part of the life force of that person and not something to try on for an hour here or there. The ability to own one’s own Judaism is crucial. When one can talk about it with confidence and not in what one doesn’t do but in what one does and believes and values, then it fills the person. How can we nurture the next generation to be able to do this? If we worry less about “tradition” which is certainly not monolithic and more about knowing why we do what we do, then our identity can sustain us in real ways.