As a child, my family attended a Reform synagogue and celebrated Jewish holidays. After my parents divorced when I was 11, my father (the primary custodial parent) rejected the traditions he learned in his Orthodox immigrant family and became a secular humanist. Although Judaism did not play a major role in my teenage years, I always retained a strong personal sense of Jewish identity. 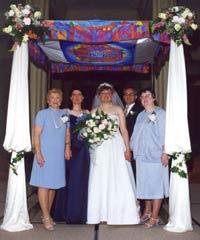 As an adult I renewed and embraced my Jewish cultural identity, especially since our child was born, although I am thoroughly undecided about my spirituality. At times while growing up, I felt like an unwelcome black sheep around the larger Jewish community because my family did not conform to the traditions of other Jewish families. Only recently have I come to realize that my experiences as an American Jew are not atypical.

The church Dan’s parents belong to is nondenominational Charismatic, a controversial branch of Christianity that emphasizes miracles and a personal relationship with God through practices like speaking in tongues. Jesus is an integral part of their everyday lives, from weekly prayer meetings to a refrigerator covered with Christian magnets. Of their four children, two remain devout Christians, and the other two have rejected organized religion completely. Dan is in the latter group, and although he was fine with having a wedding with many Jewish elements, he did not want a religious wedding.

So, you may ask, why didn’t we simply elope? Well, ceremony is very important to me, and I wanted to mark this rite of passage in a meaningful way. Even though we are not a traditional couple, we decided to write our own ceremony from scratch and find nontraditional ways to honor our families and make everyone feel included.

I wanted my wedding to be Jewish at heart and knew this would mean a lot to my grandmother, whose opinion I valued greatly. So we included the ritual of breaking a glass at the end of the ceremony and rented a huppah (a traditional Jewish wedding canopy) under which the ceremony was held.

The wedding, which took place in a picturesque historic hall in St. Paul, Minn., was officiated by my Uncle Lyle, who is a cantor. He sang a Yiddish love song, and we hired two trumpeters to play “Sunrise, Sunset” (from “Fiddler on the Roof,” about an interfaith marriage) as our processional. I wanted to include the Shehecheyanu, the beautiful Jewish prayer that thanks God for bringing us to this special day, but I was willing to leave that out to honor Dan’s wishes.

Our ceremony celebrated diversity. My uncle read a list of family names and said, “Naomi and Dan feel their wedding is not just about their commitment to one another, but also is a celebration of the community of people who have shared their lives, and about the history of the families of which they are a part.” He quoted the Psalms passage, “henay ma tov umanayim, shevetachim gam ya’chad,” which means “may you all dwell together as brothers and sisters.”

The most special part of our wedding was our candle ceremony. To honor our varied heritages, we invited a member from each of the four sides of our family to come up and tell a family story, and then to light a candle to symbolize that part of the family. Dan’s cousin Becca talked about the Peterson family legend that they are descended from a French princess who eloped with the King’s Norwegian gardener. My cousin Stacey talked about my great-grandfather’s confusing arrival to America. After the candles were lit, my uncle read the names of close relatives who are no longer with us, including Dan’s birth mother, who died when he was a baby, and asked for a moment of silence.

Did we make everybody happy? Of course not. A few guests made comments about our “unusual chocolate wedding cake,” as they were too polite to comment on the unusual ceremony! But most of the guests were genuinely touched, especially my grandmother, who raved about how much her friends loved the wedding. Dan and I were very happy to start our lives together with a ceremony that held great meaning to us.