Nothing to Fear, Much to Gain from a Community of Interfaith Families 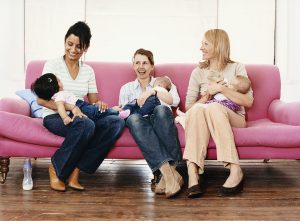 Recently, the membership director at my synagogue asked me if I would reach out to a young woman who was the Jewish half of an interfaith couple and a new temple member with her husband. She was also expecting her first child. Knowing the importance of a warm welcome, especially for intermarrieds, I said I would be happy to reach out.

I assumed my conversation with this Jewish intermarried would be similar to the discussions I’ve had with other intermarried partners looking for a Jewish home. She would feel grateful and relieved to have found a welcoming, inclusive community that dedicated resources to interfaith-specific programming.

When I called the woman, I told her about my involvement over the years in the congregation’s Interfaith Moms group and its evolution into Interfaith Families. I discussed how the group was a great way to meet other intermarrieds and build community at our large synagogue. I said I would add her name to the group’s distribution list so she would receive information on future activities.

At this point, the conversation took a strange turn. She told me that she wasn’t sure she wanted to be involved with an interfaith group because she needed to be “very strategic” about who her family associated with. I wondered what that meant.

The interfaith mom-to-be explained that she was raised in an active Conservative home that kept kosher. She had a Jewish wedding and her children would be raised Jewish. So far, a common story.

Then she made a few statements that started to help me understand what “very strategic” meant. She said interfaith groups were not comprised of families like hers where the mother was the Jewish parent. Instead, they “were mostly non-Jewish women, who really weren’t interested in raising Jewish children.”

What?!?! I’d never heard another intermarried use the same (old) stereotypes still peddled by some segments of the Jewish community or held by older generations.

She added that since the female partner controlled the religious upbringing of children and the identity of a home the families in our interfaith group would never be Jewishly active. “Besides,” she said, “Their children will never really be Jewish anyway.”

At this point, I had enough of the outdated rhetoric regarding intermarriage and decided it was time to dispel a few myths and explain what type of community she had joined.

In a friendly but firm tone, I explained that our interfaith families group was diverse. It included families with a Jewish mom and a not Jewish dad, a Jewish dad and not Jewish mom, a parent that converted, and same-sex couples with one not Jewish partner. Since the group was synagogue-based, regardless of family composition, the participants were all raising Jewish children and creating singularly Jewish homes, or moving in that direction.

I shared that many of the not Jewish partners were the ones reconnecting their Jewish spouses to Judaism. She interjected with another generalization, “Isn’t that always how it is? The convert becomes more zealous about practicing than the one born Jewish.”

I didn’t want her to have the impression that all of the not Jewish partners had converted or were in the process of converting. I said, “Some convert, some maintain their identity but aren’t practicing, and some are active in and fully committed to raising Jewish children but remain connected to their individual faith.” I also explained that we were a Reform congregation, which meant that we welcomed, recognized and accepted children as Jewish if they had one Jewish parent–regardless of the gender of the parent. The woman got quiet.

I asked her if she had any questions or if I could help her in any way. She asked about baby naming ceremonies for girls. As she shared her questions, I empathized with this young woman. I remembered the early years of my marriage when I was also unsure of how my and my husband’s choice to be Jewish would play out.

I also thought that I needed to direct our Jewish life and worried about the influence of interfaith couples making different decisions. I didn’t start feeling more relaxed about being Jewish and interfaith until we found an inclusive and welcoming community. Only then did I realize that sharing a commitment to create a Jewish home was what was important, not how each couple implemented that decision. In fact, the diversity of approaches became an opportunity to learn, rather than something to be feared.

This woman and I spoke for another few minutes. It was a nice conversation. When I hung up, I hoped that after her initial hesitation wore off, she and her husband and baby would try an interfaith families activity. Because if they tried it, they’d realize that there is nothing to fear and much to gain from having a vibrant community of interfaith families to navigate the joys and challenges of intermarriage with.