My Resolution to Unplug

A warning to you, kind reader: You have read this story before. It’s about unplugging from technology and reconnecting with your family. It’s not a new idea, in fact I know I’m late to jump on the train. But it’s also about resolutions, and Shabbat, so hopefully I can bring in a little something new to the conversation. And if not, please indulge my unplugging declaration, and a Sweet and Happy New Year to you.

So here’s my story:

I am not a big believer in New Year’s Resolutions. It’s not that I doubt people’s ability to change – quite the opposite, as my resume reflects a career in pursuit of change.  It’s just that when it comes to resolutions, I think people have a tendency to set their sights too high, to pick a goal for a 12-month period that is rarely sustainable for more than a few weeks.  Change is an iterative process, and if we’ve never done something very well before, it is rare that we can go from not doing something to doing it well every day. By setting ourselves up like that, by saying “I am never going to lose my temper with my kids,” instead of saying “I’m going to remember to breath more deeply when little Frankie gets me frustrated,” we fail to set up enough small victories to keep fuel in our tanks. In measured steps, I think anything is possible, but in huge bounds, as least for me, the hit rate is not always as good. 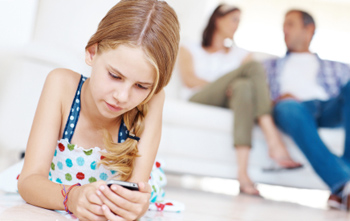 This year, there’s a change I really want to make. Technology, especially in the form of Eric’s and my pretty little iPhones, is getting in the way. It all started out rather innocently – when Ruthie was a baby, I started taking my phone out more and more to snap pictures of her – she was so phenomenally, well, phenomenal, and I loved being able to take a snapshot and immediately send it off to her grandparents or her dad. When Chaya was born, it seemed harmless to hand the iPhone over to Ruthie to play a shape-sorting game so I could buy five minutes and finish nursing in peace. And when we try to track down two or three friends at the hectic gate at the zoo, its great to have the tool of texting to save five minutes of searching with two hot kids hanging around my neck.

But despite its innocent beginnings, it is still getting in the way. Too often I catch myself taking the phone out to snap a photo of the girls and accidentally being caught up in an email that really could wait until nap time for a response. Or I complain about not having time to talk with Eric, and then get distracted by a news alert on the phone during our ten minutes of quiet together before bedtime. So how can I blame Ruthie for asking for a video more than I think she should, or begrudge Chaya’s fascination with the lit-up screen of the phone when the alarm sounds in the morning?

It’s not that the touchscreen has no place in my girls’ development – I believe that their comfort with technology will play a role in their future academic and professional success. And in my own childhood memories, anything that parents forbid became an obsession, so I think parenting around technology should be about limit setting rather than prohibitions. Truthfully, though, after reading lots of blogs and articles about unplugging (see introductory note), I don’t know what those limits should be.

So here’s our resolution, or perhaps experiment: This year, we are unplugging on Shabbat. Eric and I started talking a couple of months ago about the technology issue, but unplugging every day sounds like a bound to me, something so grand that we’d quickly fall short and taste progress-deterring failure. I started to ponder a middle ground – a set of small steps – and as the High Holidays approached, I realized that that small step is handed to me by Jewish tradition. Shabbat is not just a day of rest – it is a chance to practice a different way of living, and a different way of being as a family. So committing to do something differently 1/7 of our year is a natural thing to do as a Jew, and a great way to try on this no-technology thing.

I am not a dummy, and I know that tons of Jews have been doing this forever – that many believe we are not fulfilling the commandment by using electricity at all on Shabbat. But we are not becoming Shomer Shabbos – that’s not where we are as family, or as Jews. So rather than saying to my kids “Cell phones and computers off because we don’t use any electricity on Shabbat,” I am going to try this on: “Cell phones and computers off because we are going to be together as a family on Shabbat,” to sing our own songs, tell each other our own stories, play games that require sharing a game board or using our bodies.

I see this experiment as twofold. First, I hope it lets us see how we like life without technology, and to inform what the best limits are for our family. As I said before, I don’t anticipate our final rule will forbid technology, but I hope that living without it for a controlled period every week will help us figure out how much we’d like to live without it over the course of a whole week. And second, I hope it will teach us some new things about how we want to be on Shabbat. Maybe we’ll hate it and decide we want to be on our phones all of Shabbat…or maybe we’ll love it and next year will decide to turn something else off for 24 hours.

The initial rules are no cell phones, no Internet, no TV – landline is OK.  We’ll see how it goes, and hopefully I’ll let you know on this blog.

What do you think? Have you tried this, or do you have a different resolution? How do you make Shabbat a different day than the other six?