My Interview with Cokie and Steve Roberts 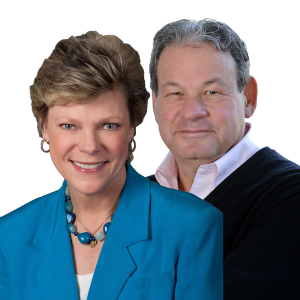 I had a very interesting interview with Cokie and Steve Roberts last week. We talked about their book, [url=

I asked the Robertses what their goals were in terms of what they hoped interfaith couples would do with [i]Our Haggadah[/i]. Cokie Roberts, a serious Catholic, said her goal was to make it as easy as possible to participate in and host a seder. She said Passover is a joyous festival, but people are intimidated about preparing for it, setting the table, and conducting the service. As I’ve said before, I applaud Cokie Roberts for being so supportive of interfaith couples engaging in Jewish practices like the Passover seder.

I asked whether they thought that interfaith couples would still be having seders twenty or thirty years from now, and both were quite certain that they would. Steve pointed out that seders have been conducted for thousands of years, and Cokie said the seder is joyous, addresses universal themes, is home based (avoiding the barriers that synagogues sometimes present), and personally customizable.

But my question posed the issue that I really wanted to explore – the interplay between Jewish identity and Jewish practices. Because if interfaith couples don’t identity their families, or their children, as Jewish, then in another generation, will the children of those families, themselves married, perhaps intermarried – will they still be interested in conducting or participating in the Passover seder?

Cokie’s answer was that what children will do in terms of Jewish practices is always a question – and aptly added that it is a question about children of two Jewish parents, too. They told me that their family has more Jewish content than the families of Jewish relatives of Steve who are in-married. Cokie said that given the reality of intermarriage, a good solution is to celebrate Jewish traditions as “a major part of the family.”

But that raised the identity/practice question again. Steve said his goal in writing the book was to provide guidance, models and encouragement to the many young interfaith couples that he encounters among his students. The model the Robertses themselves offer is to embrace both religious traditions. They said that choosing one religion, “ceding” to the other, wouldn’t work for them, because each was so deeply tied to their tradition.

So my identity/practice question is still pending. The Robertses said they don’t talk about their own children’s identity or practice, I assume out of respect for their privacy. It sounds like the Roberts’ seders are so wonderful that their children would want to continue to have them for their families. But I’m left to wonder what will happen down the road if the children of interfaith families aren’t raised as and don’t identify as Jews.

I respect the Roberts’ approach and their integrity. They are very serious about religion. Steve said he felt that couples getting married who decide to “just get a judge” because they have difficulty finding clergy “in most cases do a disservice to themselves.” He asks those couples to consider that they come from traditions and can find a way to reflect them – and not pretend they are neutral characters.  He clearly feels that religious traditions can enrich young couples’ lives.

The Robertses are not directive when interfaith couples ask their advice, either. There say there is no necessarily right way for anyone and they don’t push their model on anyone. They readily acknowledge that choosing one religion for a family and children is one way that interfaith couples can go. That is what InterfaithFamily.com has always recommended, although we hasten to add that children should learn about the other religious tradition represented in their family, and participate in it to the extent parents want them to.

We talked about other subjects and we clearly had common ground in many areas, especially the need for the Jewish community to be more welcoming to interfaith couples. Both Cokie and Steve are incredibly smart and articulate – they are great spokespersons for their approach to interfaith family life.