“Let’s send out holiday cards!” I said to Wendy and Robin, my co-workers at InterfaithFamily/Philadelphia. We have so many people who’ve supported our work in the past year—our Advisory Council, donors, class and workshop alumni and others—that Wendy and Robin agreed that it would be a great idea to send each of them a card thanking them for their support and wishing them a happy holiday season. It would be a nice thing to do. AND EASY! Or so we thought…

Just picking a graphic for the front of the card—not to mention the language for the inside—was anything but easy.

Should we have a picture of a Hanukkiyah (Hanukkah menorah) on the front? Considering that many of the recipients of the card would be interfaith couples, that seemed insensitive. Only acknowledging the holiday that was from one partner’s religious tradition didn’t feel like the right thing to do.

We all agreed that we’re not into the “Christmakkuh” mash-up of Christmas and Hanukkah. An image of a reindeer with antlers that look like a Hanukkiyah or Santa playing dreidel wasn’t the way we wanted to go.

We also knew that we didn’t want to go the route of last year’s (admittedly creative) half Hanukkah-half Christmas card (you can read Rabbi Ari Moffic’s comments on it here). 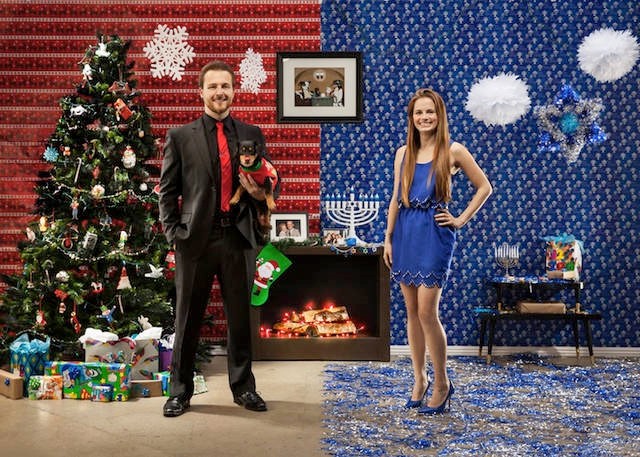 Aside from a bifurcated card not feeling quite right, we didn’t want to send the message that we think every Jewish person in an interfaith relationship has a Christian partner. What about Jewish-Hindu, Jewish-Buddhist, Jewish-Muslim, etc., couples?

So we decided to stay away from images directly associated with any particular faith tradition—Jewish or otherwise—whether those symbols were “religious” or “secular.” No Jewish stars; no Hanukkiyah; no latkes; no dreidels; and no Hanukkah gelt. No nativity scenes; no Christmas trees or ornaments; no Santa Claus; and no reindeer.

IT WOULD BE EASY! Or so we thought…

What about a snowman? Snowmen aren’t associated with any religious tradition, are they? But for some reason, when I think of pictures of snowmen, Christmas cards come to my mind. So I veto-ed the snowman.

What about snowflakes, they’re neutral, right? But I couldn’t help thinking of all of the Christmas cards I’d seen over the years with snowflakes on them.

So, whether or not I was being rational, snowmen and snowflakes were now removed the discussion. Surely NOW IT WOULD BE EASY. Or so we thought…

Robin then suggested that we find a picture of candles. After all, for many of us the winter holidays are a time to celebrate light amidst the darkness. Candles are used in lots of religious traditions, and non-religious ones as well. So why did I suddenly feel like candles—which are lighted every night of Hanukkah—reminded me of a Christmas card? Embarrassed to critique yet another seemingly-neutral idea as “too Christmas card-y” I suggested: “How about blue candles?” (Blue and white being “Jewish colors.”) And “How about nine candles?” (Since there are nine candles in a Hanukkiyah.)

Robin actually found a beautiful picture that had nine blue candles and they weren’t in a Hanukkiyah, just nine small blue candles all with shining flames. We all agreed that the image didn’t look “too Jewish” or “too Christian” (or “too anything else”) but yet it had a nice winter holiday feel. We had it!  Or so we thought… Turns out that image wasn’t available for reproduction. 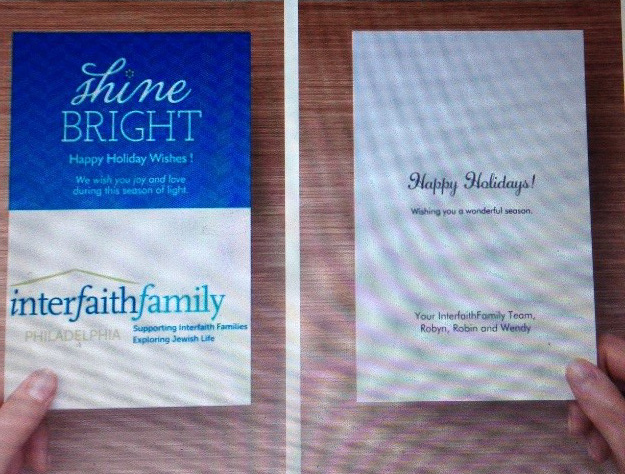 Finally, after I rejected a few more images that just didn’t “feel right” for various reasons, Wendy came up with a card that we all agreed upon.

I liked it! It didn’t seem to represent just one religious tradition. I was pretty sure that nobody receiving it would feel excluded by the image (because in the end, we left the image off) or the language. EASY! Or was it? Now I’m left wondering, by making it so “neutral”…by being so careful to try to ensure that nobody who received it would feel left out…by being so sensitive to not “exclude” anyone, were we “including” anyone?

Hopefully, everyone who receives our card in the mail will recognize that our intentions are good and that we are grateful to them and want them to have a happy holiday season—no matter what holidays they do, or do not, celebrate.

I’d love to hear from all of you. For those of you in interfaith families, do you send holiday cards? Are they for a particular holiday, more than one holiday, or just general holiday greetings? Please share what you do as well as the thought process behind it. 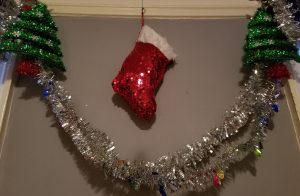