Michael Douglas Speaks Out on Anti-Semitism 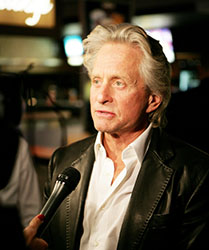 Have you or a loved one ever had the experience of overhearing or being told something point blank that was anti-Semitic because the speaker didn’t think they were in the company of someone Jewish? Michael Douglas did.

Raised without formal Jewish religion by father Kirk Douglas (Jewish) and his mother Diana (not Jewish), Douglas began to connect with his Jewish heritage as an adult, after his son Dylan began connecting with Judaism through his friends.

“While some Jews believe that not having a Jewish mother makes me not Jewish, I have learned the hard way that those who hate do not make such fine distinctions,” wrote Douglas, who recounted his first experience with anti-Semitism (in high school during a conversation with a friend who did not know he had a Jewish background) in a recent op-ed in the LA Times.

Unfortunately, his son Dylan also learned the hard way through an unprovoked encounter while on vacation in Southern Europe. Dylan was wearing a Star of David, which his father realized must have been the trigger for the encounter.

After defending his son, Douglas decided to use the power of his voice to speak out on a broader platform. “Anti-Semitism, I’ve seen, is like a disease that goes dormant, flaring up with the next political trigger,” he wrote. Simply put: “It is time for each of us to speak up against this hate.”

We’re glad to see that Douglas is inspired by the honor of this year’s Genesis Prize to take a leadership role in the Jewish community and to make his voice heard. He appeals to all of us to challenge ourselves to stand up to anti-Semitism. “Because if we confront anti-Semitism whenever we see it, if we combat it individually and as a society, and use whatever platform we have to denounce it, we can stop the spread of this madness.”

Lindsey Silken is the director of content at 18Doors based in Natick, MA. She can be reached at lindsey@18doors.org.