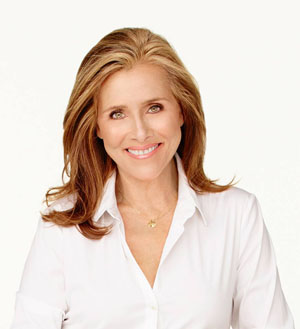 Meredith Vieira has had a long and successful television career. She has been a correspondent for CBS and NBC News, co-anchored Today, moderated the panel on The View, and hosted the game show Who Wants to be a Millionaire. On September 8 she’ll launch a new venture: her own weekday syndicated talk show. But Vieira’s longest running production is her interfaith marriage to journalist Richard Cohen—they’ve been married for 28 years and have three children.

Vieira was raised Catholic, and is raising her kids Jewish. She explains, “Richard is a cultural Jew. He’s not observant. But he wanted to raise the children Jewish and I said, ‘That’s fine but you’ve gotta take the lead here because I don’t really know much about Judaism.’ He said ‘no problem.’” The family celebrates Jewish holidays. “We love Passover,” Vieira says. “But we don’t go to temple.”

She’s thrilled that her oldest son, Ben, now working in Shanghai, China, will soon return home to attend business school. Her middle child, Gabriel, is a cub reporter in Spokane, Washington, and daughter Lily is a senior at Northwestern University.

Vieira never intended to host her own talk show but missed the “intimate connection” with the daytime TV audience that she enjoyed before. So she’s entering a crowded field in which many others have failed, notably Katie Couric. She realizes that the stakes are high, but reasons, “It doesn’t have to be perfect from the beginning. You build your audience. So why not try it?”

She originally fancied the idea of doing the show out of her Westchester, New York home, “but my husband nixed that right away.” So she opted for Plan B, replicating her living room on the show’s set at NBC’s 30 Rock. “I want the vibe to be that you’re coming to my house. We have a band because I always wanted a band in my home,” says Vieira, who’ll open the show with a list of topics on her mind and segue to guest segments.

“I find that the most interesting people are the ones you don’t know. There will be celebrities. It’s not a celebrity-driven show but we’re going to use them in ways that differ from other shows. We’re looking for inspirational stories: heroes, people who are doing things in their community, things you’d be able to do yourself. We’ll have a lot of games because of my history with Millionaire. We have something called the Pick Me Up Truck that’s going around the country helping people—delivering books to schools. Giving somebody a job.”

Health issues may also come up. Vieira has experienced them firsthand, as her husband Richard suffers from multiple sclerosis, has had two bouts of colon cancer and had a “massive blood clot” in March “that kicked in his MS symptoms. But he’s good,” Vieira says. “He’s a tough cookie. We’re very lucky.”

Gerri Miller writes and reports from Los Angeles about celebrities, entertainment and lifestyle for The Jewish Journal, The Nosher, Hadassah and others. A New York native, she spent a summer working at Kibbutz Giv'at Brenner in Israel and attends High Holy Day services at the Laugh Factory in West Hollywood every year.

Gerri Miller writes and reports from Los Angeles about celebrities, entertainment and lifestyle for The Jewish Journal, The Nosher, Hadassah and others. A New York native, she spent a summer working at Kibbutz Giv'at Brenner in Israel and attends High Holy Day services at the Laugh Factory in West Hollywood every year.