Love Is In The Air

Is an interfaith ketubah Legit? Love is in the air… (Is it wrong for a rabbi to say “happy Valentines Day“?) 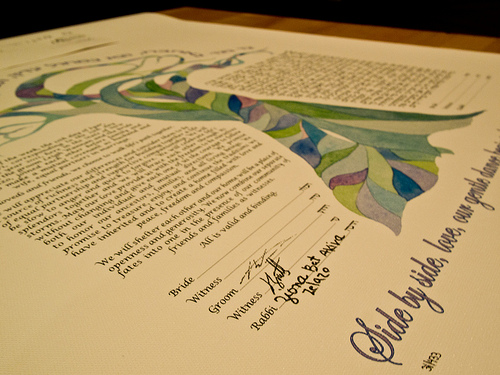 One question couples typically ask me as we go over their wedding ceremony is, “can we have a ketubah even if my partner isn’t Jewish?” A ketubah is a Jewish marriage contract, a tradition that goes back thousands of years. I usually explain how they have changed over time as Judaism and society have changed.

The ketubah as part of the wedding ceremony for Jews who are not Orthodox has come back into vogue. For the recent generations past, the ketubah was sometimes seen in liberal Jewish settings as archaic, too legalistic, and unnecessary. However, in part because it is often a purchased piece chosen for its artwork as much as for the text, and in part because liberal Jews have begun to re-embrace and reinterpret Jewish traditions that had been discarded, it is popular again. (Where “again” is “for the last 4-5 decades.”) It is signed in the presence of witnesses who are close to the couple; it’s displayed in the home as a tangible memento of the wedding.

Traditionally, the two witnesses who signed the ketubah had to be Jewish, males over the age of 13, and not related to the couple. With a modern ketubah, the couple can pick whomever they want to sign it. Once we veer from a strict interpretation of Jewish law, I feel that any decisions regarding the ketubah can be adapted as well. Thus, as a woman rabbi signing the ketubah, I am open to having parents or siblings of the couple sign the ketubah, even if they aren’t Jewish. The point is to pick witnesses who are valued and trusted — the couple will be seeing their signatures for years to come, and they should elicite feelings of warmth, connection, pride, and love.

You may think that anything other than a halachic (and it’s always whose version of halachic) text to be absurd, a farce, or inauthentic. However, Judaism has always had room within it for descent, for adaption, for re-interpretation, and for adaptability. An interfaith couple that finds meaning in Judaism and seeks to imbue their wedding ceremony with Judaism, can have a ketubah — absolutely.

The question I ask myself is at what point does a tradition or custom get so altered that it becomes something else? Is it possible to appropriate such totally different meaning to a tradition that it no longer makes sense? I think that the original point of a ketubah was to write out the terms of the wedding legally and to protect each partner financially if anything happened to one or the other or the sanctity of the union. While a liberal Jewish ketubah or interfaith ketubah may not be a legal document within Jewish or secular courts, it is still a wedding contract. The texts speak about the parameters for the marriage in terms of hopes and dreams the couple share and in terms of the values each see in the other. So although an interfaith ketubah stretches this Jewish tradition far from the original texts, I do believe it is still within the spirit of traditional ketubahs and still meaningful and emotionally, spiritually, and psychologically binding. Signing the ketubah can be a beautiful way to begin a wedding.