Lessons from ‘My Basmati Bat Mitzvah’ 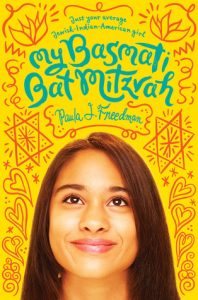 I don’t normally read books written for middle schoolers, but I was in the children’s section of my local library picking up a book for my daughter the other day when I noticed a book with a bright yellow cover with a pretty Indian girl entitled My Basmati Bat Mitzvah, written by Paula J. Freedman, on display. I opened the book and started to read the summary on the inside cover:  “For Tara Feinstein, life with her Jewish-Indian-American family is like a bowl of spicy matzoh ball soup. It’s a mix of cultures that is sometimes delicious, and sometimes confusing…”

I was hooked, and I immediately checked out the book. As someone who devotes my days to working with interfaith couples and families and advocating for a welcoming Jewish community, I couldn’t wait to start reading.

And I wasn’t disappointed. It was a lot of fun to read the story of Tara’s desi mispacha—a term that Tara describes in the book as a “Hindi + Yiddish made up term meaning a family that’s a little bit Indian and a little bit Jewish. Nicer than ‘Hin-Jew’…” I appreciated how the author depicted Tara’s struggles as she prepares to become a Bat Mitzvah—her questioning whether or not she believes in God; her worry that by celebrating becoming a Bat Mitzvah she will somehow be less Indian; her confusing relationship with her Catholic best friend who wants to be her boyfriend.

Tara’s Indian mother converted to Judaism years earlier, before marrying her father, but Tara still feels a deep connection to her Indian family and her Indian heritage. She deeply loved her mothers’ parents who lived in India and died several years earlier. She feels a special bond to her Nanaji (her mother’s father) and wants to be sure that celebrating her Bat Mitzvah won’t make her forget him. She adores Indian food, and though her mother doesn’t cook, her father—who grew up Jewish in America—makes great Indian food. Tara loves to watch and act out scenes from Bollywood movies. And for good luck, she rubs the statue of Ganesha that sits on her dresser.

One particular scene in the book really struck me. When Tara realizes that a friend of hers has stolen a bracelet, Tara grabs the bracelet and goes to the store to return it. As she’s reaching to put the bracelet back on the jewelry counter, she’s stopped by a security guard, who thinks that Tara’s involved in the shoplifting. When she tells the security guard that her name is “Tara Feinstein,” he looks at her skeptically and says to her: “No, really.”

That’s what it’s constantly like for Tara…people making assumptions about her, and her Jewishness, based on how she looks, and on her mother’s (and thus her) background. And this is what it’s like for so many children from interfaith, inter-racial and/or inter-cultural homes. Fortunately for Tara, she comes to realize that connecting to her Judaism on a deeper level doesn’t mean that she has to distance herself from her Indian heritage. As she says in her Bat Mitzvah speech: “…now I know that inspiration can come from many different sources, and that having multicultural experiences can actually make you stronger and more accepting of different points of view.” She comes to see that “Nanaji would really have liked my Bat Mitzvah…he was a very spiritual person…he would have approved, as long as I did it with an open heart.”

When my children write book reports for school, they always have to tell whether they would recommend the book, and why or why not. Well, I can say that I would highly recommend My Basmati Bat Mitzvah. It was refreshing to read about a young woman coming of age and dealing with the multiple aspects of her identity, and realizing that she could be fully Jewish AND still honor her Indian cultural heritage (as she did by wearing a treasured sari from her mother’s family which was made into a dress for her Bat Mitzvah).

The book shows in a touching way not just the challenges, but also the blessings, of growing up in an interfaith, inter-cultural family. It’s always said that kids need to see themselves reflected in the dolls they play with, the television and movies they watch, and the stories they read.  I’d imagine that a middle schooler, especially a girl, growing up in an interfaith, inter-racial or intercultural home would at least find some aspects of herself reflected in Tara.

If you’re a mom or dad in an interfaith home and you have a child in middle school, I suggest that you get My Basmati Bat Mitzvah for your child. Better yet, read it with your kid! It’ll give you a great opening to discuss complex issues of belonging and identity. If you’re raising your child as a Jew, you can discuss with them how they can still be one hundred percent Jewish even if one parent did not grow up (and may still not be) Jewish. And you can talk about how being Jewish and proudly celebrating your Jewish identity doesn’t mean that you can’t love and honor family members who aren’t Jewish with a full heart or that you can’t embrace aspects of what you inherited from your parent who did not grow up Jewish.

I have to return My Basmati Bat Mitzvah to the library soon, before it’s overdue. And when I get there, I may just go back to the children’s section to see what other great books I can find for myself.