Leading the Way Through Unfamiliar Terrain: The Bar Mitzvah Year

Raising a child in a religion other than the one you grew up in is all about leading the way through unfamiliar terrain–preparing your child to take his place in a context that’s not your own. I’ve met people who find the journey exhilarating in a refreshing way. For me it’s been more like running a gauntlet of expectations I don’t quite get. Still, everything was fairly low-key and my worries were mostly about my own insecurity until we got to my son’s Bar Mitzvah year. 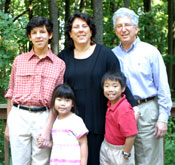 From the moment we got the date–over a year ahead of time, which surprised no one but me–I felt in way over my head. Throughout the process it seemed no matter what question I asked, the answer I got never fully covered what I wanted or needed to know. In retrospect, it would have been hard for anyone to give me an answer because I couldn’t quite articulate the question. I realize now that I wanted to know what the essence of the experience was supposed to be. Was it a sort of honor to read from the Torah? Was it an affirmation of attaining an age? Was it an expression of a facility with Hebrew and tropes (the chanting melody for lines in the Torah)? Above all I wanted to “get” the point from the inside out–all the nuances–so I could guide my son through this life passage.

I started my questioning process the way I always do–with some research, this time the handouts provided by the temple. They spelled out the timeline, but it felt too simple in a way I couldn’t quite express. How did they know that eight tutoring sessions would be enough for my son to learn an entire Torah portion with trope? What if he needed more help? What if two sessions with the rabbi were not enough for him to write his speech? Were they assuming my husband or I knew something about Torah so we could help? And how was all of this really supposed to fall into place in just six months? When my son’s name fell through the cracks and we started the process two months late, my anxiety level hit the roof.

Finding nothing in the way of the support I felt we needed, I switched temples–something anyone with a true understanding of the process would never think to do! But I wanted to be sure my son had what he needed in order to be prepared. I wanted it to be a good experience for him. And so he dove into learning his Torah portion and analyzing it for the speech he’d give. Then there was the Haftarah portion with comments to accompany it. Prayers to learn. A suit to buy. Meetings with the Hebrew tutor to learn the trope. Chanting to a tape so that the trope became familiar. And meetings with the midrashima (person who helps interpret the Torah portion). Somewhere along the way I realized I was just along for the ride–or more aptly, to shuttle my son from one meeting to the next! This was his Bar Mitzvah. He’d tell me if he needed help.

I thought at first, as I realized my role was now one of support rather than guide, that the Bar Mitzvah year had been about my son learning he could negotiate something as complex as the Bar Mitzvah year on his own. That certainly felt significant enough to satisfy my quest for “getting” the Bar Mitzvah. But on the actual day of his Bar Mitzvah, I finally understood that the nuance of the event was this first glimpse of the man my son is becoming.

Here’s what I wish I’d known:

Gina Hagler is a freelance writer living in the Maryland suburbs with her husband and their three children. You can see more of her work at www.ginahagler.com.