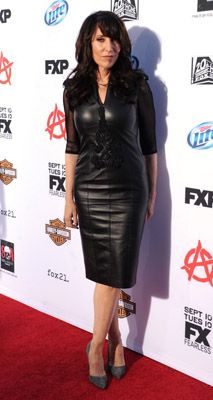 Katey Sagal: Mother of Anarchy on Her Own Family

Katey Sagal became famous for her decade-long comedic turn as Peg Bundy in the comedy series Married…With Children, and later scored another sitcom hit in 8 Simple Rules For Dating My Teenage Daughter, opposite John Ritter. For the past six seasons, she’s played a very different, darkly dramatic role as Gemma, the matriarch of a violent biker club in FX’s Sons of Anarchy. It begins it seventh and final season on September 9, and she recently talked about its bittersweet ending as well as her memories of growing up in an interfaith family.

While we don’t define Jewish in these terms, Sagal says, “I’m not technically Jewish because my mother wasn’t Jewish. My father was Jewish but was more of a socialist,” said Sagal, whose dad was the late director Boris Sagal. “I would say I’m culturally Jewish. It’s a feeling. I had a little Yiddish grandmother who didn’t speak any English, and I would go to her house every Sunday for breakfast. There was not a religious component. But I think it’s a very soulful, comforting religion.”

Today, Sagal, now married to Sons creator Kurt Sutter, who is not Jewish, follows her “own spiritual belief. I have a very strong faith and belief in God, though I don’t have a formal religious experience.” She has three children, two older kids from her marriage to musician Jack White and a 7-year-old daughter with Sutter.

Now that the series is ending, she’s looking forward to spending more time with her children, but said she will “miss this amazing character, the amazing writing. It’s rare when you have even one successful show and now I have another, but I feel it’s appropriate to end it at this time.”

She’s surprised that audiences still embrace Gemma despite her despicable actions, including stabbing her own daughter-in-law to death with a fork. “I’m not sure what the end game is going to be for her, but I can’t imagine it’s comfortable, living or dying. She’s kind of trapped. It’s kind of the nature of this show. Everybody’s got an X on their forehead. But I think it will be a satisfying ending.”

Of late, Sagal been working on Sutter’s film Southpaw, and will shoot a boxing film called Bleed for This in November. “I would definitely do another series,” especially if it’s a cable show with no more than 13 episodes a season, Sagal said, but acknowledged, “This will be a tough act to follow.” Meanwhile, she’s recording narration for the new NBC romantic comedy A to Z, which premieres October 2. It’s not her first voiceover job—she has an extensive animation resume that includes 136 episodes of Futurama as Leela. “It’s great. These gigs are easy and not a huge time commitment.”

Also a recording artist with four albums to her credit, Sagal will sing on screen in Pitch Perfect 2, in her role as new choir addition Hailee Steinfeld’s mom. It’s due in theaters next May.

Gerri Miller writes and reports from Los Angeles about celebrities, entertainment and lifestyle for The Jewish Journal, FromtheGrapevine.com, Brain World, HeathCentral.com, and others. A New York native, she spent a summer working at Kibbutz Giv'at Brenner in Israel and attends High Holy Day services at the Laugh Factory in West Hollywood every year.

Gerri Miller writes and reports from Los Angeles about celebrities, entertainment and lifestyle for The Jewish Journal, FromtheGrapevine.com, Brain World, HeathCentral.com, and others. A New York native, she spent a summer working at Kibbutz Giv'at Brenner in Israel and attends High Holy Day services at the Laugh Factory in West Hollywood every year.