Jewish Genes: Are They in Our DNA or in Our Stories? 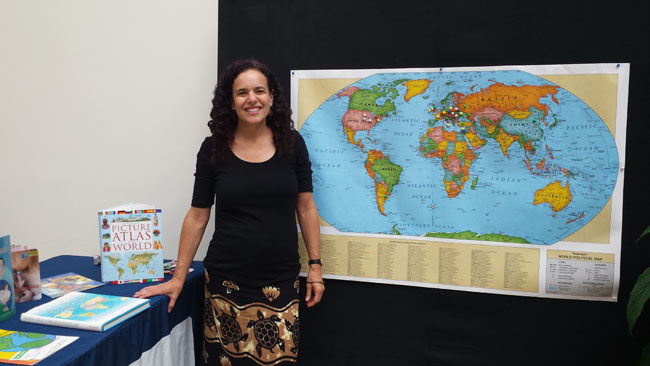 Where are you from? It seems an innocent enough question. But as our families become more and more diverse, the answer can get wonderfully complicated. Recently at a “Saturdays Unplugged” event at the Jewish Community Center in San Francisco, I asked attendees about their ancestry and invited them to place pins in a world map marking their families’ journeys.

The map shows that a sampling of Jewish San Francisco families come from Argentina, Cyprus, Lithuania and China to name a few countries of origin. As kids turned to their parents and grandparents asking, “Where am I from?” I started to think about how complicated this question is.

So I asked one of my own kids: “Do you know where you’re from?” He started breaking it down into “sides” immediately. “Mama, your side is from Poland and Russia, right? Mommy’s side is from Germany, Scotland, Finland…” I was glad he added her ancestry without hesitation even though I gave birth to him and he isn’t biologically related to her. Clearly, where someone is from is not as easy as a DNA test. As he continued rattling off the countries where he felt he had a connection, I realized that I also hoped he would list his sperm donor’s ancestry. After all, he wouldn’t be here without him. So we added those to the mix. This child who was birthed by me, an American Jew with only Eastern European ancestry, can now identify himself with a good portion of Europe.

What about my other child? He was birthed by my partner, a mix of Northern European ancestry who converted to Judaism long before his birth. Along with those regions of the world, does this little boy also claim an Ashkenazi heritage? He certainly claims a Jewish one and our Jewish practice is largely Ashkenazi…but is he “from” Eastern Europe as my ancestors were?

Jews have long disagreed about what exactly Judaism is: a matter of biology, peoplehood, civilization, religion or ethnicity. Even early on in Jewish history, there were at least two strands of thought: Being Jewish was in some instances about claiming a certain lineage, and at other times about observance of a spiritual tradition. The first line of reasoning made it very difficult to join, for example, while the latter made it much easier to choose to identify as a Jew even if one wasn’t born one.

One scholar notes that tension ensued due to these “two distinct definitional standards…the religious and the ethnic.” [Porton, Gary. The Stranger Within Your Gates] We still struggle with those definitions, but today, with more and more conversion, intermarriage, adoption, donor insemination and surrogacy, we are moving away from a genetic definition (in my eyes a welcome shift) to a Judaism defined more as an affinity with a unique worldview. A lineup of kids at a typical Bay Area synagogue classroom is quite different than it would have looked 40 years ago when I was a kid.

A few years back, I worked with college students to create a photo exhibit of their peers who claim multiple ancestries. It was called, “Jews Untitled” and they challenged visitors to the exhibit to rethink the way they defined “Jewish” and allowed Jews to create their own self definitions. With the diversification of Jewish families, we asked one another how we can best teach children about their mix of rich backgrounds. How can we help Jews claim and take pride in their multitude of heritages? And how can we make sure that the entire Jewish community is engaging in this conversation as well?

I imagine us having an infinite capacity to claim a variety of stories as our own. I was recently at an author event for the book Just Parenting about creative family making. One participant with an adopted child told the group that she tossed out a baby book she had been given because on the first page there was a picture of a family tree to fill in. She was so overwhelmed by the challenge of fitting her child’s family story into a neatly defined map with two “sides” that she decided it needed to go.

For many of us, two “sides” doesn’t tell the full story of our origins and our affiliations. An Ashkenazi Jewish friend of mine adopted a child from China with her Filipino husband. The child says of herself at age 7, “I’m half Chinese, half Filipino, half American, and half Jewish.”  She has four sides! But, really, who doesn’t? We all have more complicated stories than “two sides” allows. She’s a model of how we can comfortably hold many identities within us.