Steven and I were recently married in an outdoor Catholic and Jewish celebration. The ceremony itself was the biggest black box for us when planning our wedding and we hope sharing how we brought our two faiths together into an interfaith ceremony helps anyone else trying to decode this process.

Steven was raised Jewish and I’m a born and raised and practicing Catholic. We wanted faith as part of our ceremony and we also wanted to make sure it represented us and was welcoming and inclusive for our families and friends in attendance.

With some work, the help of great people and some luck, we pulled it off.

Steven’s parents are really involved in their Jewish community and through those connections found us a local rabbi, Lev Baesh that they thought we would like. It just so happens that Lev has a long history with InterfaithFamily and continues to work as a consultant with the organization. Steven and I both really value sustainability, so when we found out that Lev has solar panels on his house and chickens in his backyard, we felt like things would work out. The first time we met him for coffee (and to “interview” him) he said two things that stuck with us through the planning process:

1. Many of the major religious milestones (or sacraments in the Catholic world) recognize things that have already happened—baptism/ naming ceremonies (the baby is already born), funerals (the person is already dead) and in the case of marriage, two people have already made the decision to be together and the ceremony is to officially recognize it. Knowing this took some pressure off of us—we’d already been through the hard part of finding each other and figuring out that we wanted to be together forever. The ceremony was the cherry on top.

2. The ceremony is the first real opportunity to set the tone for how religion is going to look in your newly formed two-person family. That observation actually added a little more pressure, but also helped us find a framework as we came to decision points when planning the ceremony. For example, while I had written a word-by-word ceremony, our officiants both wanted the opportunity to speak in their own words, reflecting the sentiment we put forth in the draft. When we looked at our framework, we decided we wanted our faith journey to have room for flexibility and to be genuine and personal, so we agreed to let our officiants speak from the heart (that ended up being a GREAT decision—more on that later).

We found our priest through the recommendation of a friend who served on the Board of Directors for the Interfaith Action of Central Texas. I like the priest at my longtime Catholic parish, but I wasn’t sure he had the personality we needed for an interfaith ceremony. It can also be challenging to have the Bishop recognize an interfaith, outdoor marriage. Luckily, Father Larry Covington knew how the system worked and helped guide us through the process which included the required paperwork as well as Pre-Cana, multiple pre-marriage preparation meetings a Catholic couple goes through. He also made us feel at ease about an interfaith ceremony and marriage. Oh, and he speaks some Hebrew, which came in handy (see list below). 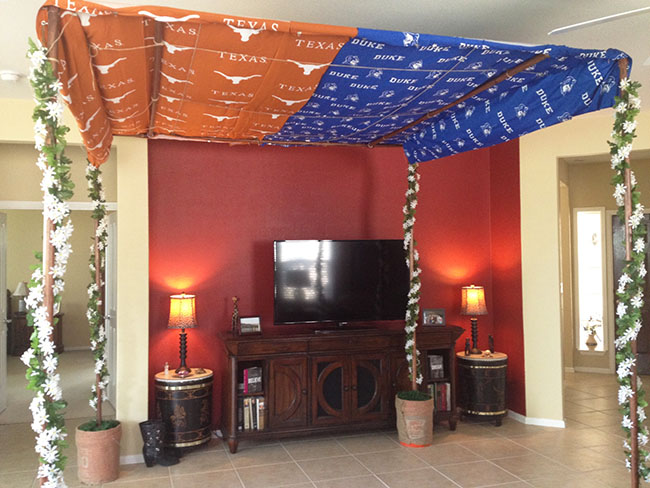 We decided on a mix of Catholic and Jewish traditions as well as things we just thought would be cool. Here’s what we ended up doing:

Here are a few additional resources and things we did that were helpful:

Lots of communication with our guests: We emailed all of those attending the wedding to give them the heads up that our wedding would have a rabbi, priest and a dog. It really helped people know what to expect.

Ceremony: It wasn’t easy to find more than an outline of a ceremony, but we did find one from 18Doors that we really liked. Here it is.

Vows: In addition to the traditional vow exchange, we also wanted to say our own words to each other. We worked off of this list and made the vows our own.