If you, like me, are past the age of 40, you may remember years ago hearing the claim that Little Mikey of LIFE cereal fame died from the explosive effects of mixing Pop Rocks candy with soda pop. Or you may have heard that children’s television show host Mr. Rogers (Fred Rodgers) always wore long-sleeved shirts and sweaters on his show to conceal the tattoos on his arms he obtained while serving in the military. Or perhaps you’ve heard that alligators live under the New York City sewer system. But, in reality, none of these stories are true. They’re all “urban legends.” And I’m proud to say that I never believed any of them (well, except the one about Mikey and Pop Rocks—I did believe that one for awhile…). 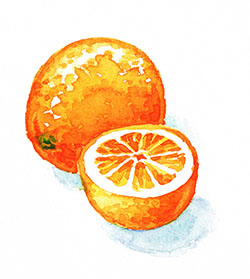 But there’s another urban legend, one connected to the Passover seder, that I’ve believed for years. In fact, I’ve told this story many times at my own seders. It’s the story of the “orange on the seder plate.” And until this week, I always thought the story I told was true—after all, I’d heard it so many times, and read it in so many different places.

The story goes something like this: Professor Susannah Heschel was giving a lecture in Miami Beach, when a man stood up and yelled: “A woman belongs on a bimah like an orange belongs on a seder plate.” In order to show that women DO belong on the bimah—that women have the right to a place in Jewish ritual and in Jewish leadership—Heschel and others began to place oranges on their seder plates. (According to another version of the story, the man yelled: “A woman belongs on the bimah like a piece of bread belongs on the seder plate.” Wanting to make a point about women’s rightful place in Judaism, but not wanting to place bread, which is forbidden on Passover, on her seder plate, Heschel replaced “bread” with “an orange,” since the incident took place in Florida, “The Orange State.”)

I learned the story of “the orange on the seder plate” sometime in the late 1990s, when I was a rabbinical student. At the time I was in my early 30s, hosting my own seders for the first time.  Like many of my colleagues, I strived to make my seders authentic, relevant and meaningful by balancing tradition with creativity and innovation. I embraced the traditional symbols of the seder (the four cups of wine, matzah, egg, parsley, etc.) and also newer symbols, such as Miriam’s Cup and the orange. For the past 15 years or so, when I’ve gone to the produce store to buy parsley, horseradish and apples and nuts for my charoset, I’ve made sure to purchase an orange for my seder plate as well. And at every seder I’ve hosted, I’ve shared the “story of the orange on the seder plate” and how it represents women’s equality in Judaism.

But recently I found out that the story I’ve been telling simply isn’t true. Here’s the TRUE STORY, in Professor Susannah Heschel’s own words, from an article that she wrote for The Jewish Daily Forward in 2013:

“At an early point in the seder…I asked each person to take a segment of the orange, make the blessing over fruit and eat the segment in recognition of gay and lesbian Jews and of widows, orphans, Jews who are adopted and all others who sometimes feel marginalized in the Jewish community.

“When we eat that orange segment, we spit out the seeds to repudiate homophobia and we recognize that in a whole orange, each segment sticks together. Oranges are sweet and juicy and remind us of the fruitfulness of gay and lesbian Jews and of the homosociality that has been such an important part of Jewish experience, whether of men in yeshivas or of women in the Ezrat Nashim.”

Heschel went on to write of the Miami Beach lecture urban legend:

“That incident never happened! Instead, my custom had fallen victim to a folktale process in which my original intention was subverted. My idea of the orange was attributed to a man, and my goal of affirming lesbians and gay men was erased.

“Moreover, the power of the custom was subverted: By now, women are on the bimah, so there is no great political courage in eating an orange, because women ought to be on the bimah.

“For years, I have known about women whose scientific discoveries were attributed to men, or who had to publish their work under a male pseudonym. That it happened to me makes me realize all the more how important it is to recognize how deep and strong patriarchy remains, and how important it is for us to celebrate the contributions of gay and lesbian Jews, and all those who need to be liberated from marginality to centrality. And Passover is the right moment to ensure freedom for all Jews.”

I’m glad to have finally learned the “true story” of “the orange on the seder plate.” And now that I know it, will I still put an orange on MY seder plate this Passover? I sure will! But, like Professor Heschel, I’ll invite each of the participants at my seder to take a segment of the orange, make the blessing over fruit that grows on trees and eat the segment in recognition of gay and lesbian Jews and of widows, orphans, Jews who are adopted, interfaith couples and families and all others who sometimes feel marginalized in the Jewish community.

After all, the Passover seder is very much a time for asking questions (for the importance of questions in the Passover seder—beyond the “Four Questions”—see my blog from last year about the seder). And if I’ve learned anything from discovering the truth about the urban legend of the “orange on the seder plate,” it’s that we need to constantly be questioning: even those things that we’re confident we already “know.”

Learn more about the meaning behind the items on the seder plate and see our 90-second How to do… a Seder Plate video here.