It’s Not a Dilemma When it Comes to December Dinners 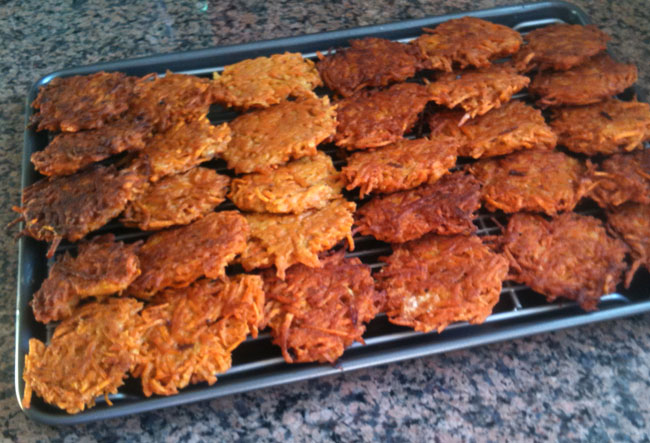 Growing up, latkes were always the purview of my dad and my grandma, but now that they’ve both passed away, the baton has been passed to me. Their latkes were the totally traditional, no frills, hand-grated style and they were served alongside my mom’s Corn Flake Chicken, a family friend’s homemade applesauce and my Great Aunt Shirley’s sweet and sour meatballs at our annual family and friends Hanukkah party.

The times have changed, however, and now our family is more spread out with the grandparents retired to Florida and siblings and cousins flung far and wide. While we’ll be celebrating Hanukkah in our house, we’ll also be traveling to Connecticut for Christmas with my sister-in-law, her husband, my nephew and their three fat cats. My in-laws will be up from Florida as well, and this is our only opportunity to celebrate any of the December holidays together, so, we’re doing it all at once!

For some families this is a time of tension, figuring out how to combine multiple faith traditions, but I think when it comes to food, eating together can only bring us together. I love traditional Jewish food, and will make my family’s latkes at some point during the holiday, but for our Hanukkah/Christmas in Connecticut, I’ll be bringing along these delicious baked sweet potato latkes which you need no prior latke-making experience to perfect!

At Hanukkah we usually eat foods that are fried—in memory of the oil that lasted for eight days—which is why latkes and sufganiyot (jelly-filled doughnuts) are often on the menu, but, when you’re cooking in someone else’s house, you might want to steer clear from the frying, lest you leave their whole house smelling of latkes until New Year’s. This recipe is really the best of both worlds, as it employs oil in the recipe, but they are not deep fried. They still come out incredibly crispy thanks to the finely-grated potatoes and onions and the help of the baking powder.

This recipe is incredibly versatile and once you learn the technique you can tweak it to include the spices you like the most. It pairs well with chicken, beef or fish, or could be served as an appetizer, topped with crème fraiche or a mango chutney. While my dad and grandma may have disapproved, I really need to take the help wherever I can get it during busy holiday dinners, so I’ll be taking advantage of my food processor when preparing these. Another tool that is a huge help in this recipe is a microplane to grate the fresh ginger. 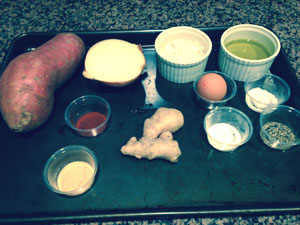 4.    Combine all ingredients
5.    Using a ¼ cup measuring cup, form patties, place on greased cookie sheet, flatten down patties with a fork in a criss-cross pattern. (Alternatively, you could cook this as one LARGE pancake in a cast iron pan or a pie pan, and then cut it in slices to serve.)
6.    Bake for 25 minutes, flip and bake for 15 more minutes until crisp and slightly brown

Wishing you all the best as you celebrate this joyous time of year with your family or friends! Let us know how the cooking goes in the comments section below and for more Hanukkah recipes, click here.

Here are some links to my favorite products to use in this recipe, which could also be great holiday gifts for the foodie on your list: 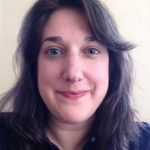 Sarah Ruderman Wilensky is the founder of JewFood through which she teachers about Jewish values, culture, history and holidays through cooking and eating, because–what’s more Jewish than food? Sarah has been in the field of Jewish Education for over a decade, with experience in synagogues, camps and universities and currently works as the Jewish Educator at the Jewish Community Center of Greater Boston. Sarah has an undergraduate degree from Muhlenberg College in Theater Arts and studied in the MARE program at Hebrew Union College in New York.  She is also a StorahTelling trained Educator, has been a member of the National Association of Temple Educators, Hazon’s Jewish Food Educators Network and CJP’s Families with Young Children Community of Practice. Sarah lives near Boston with her husband, two young children and cat, Brisket.