Is there a connection between Easter eggs and the afikomen?

When I was little, my mom made a huge deal of the Passover afikomen hunt. The prize for finding the broken pieces of matzah throughout the house was the hot toy of the day (I vividly remember the year of the Beanie Baby craze).  She also created an elaborate Easter egg hiding game in which one rhyming clue (starting on our pillows in the morning) led to another, with a big basket filled with eggs as the grand finale. What is the allure of the hide-and-seek element of both Easter and Passover? Do they have anything in common? 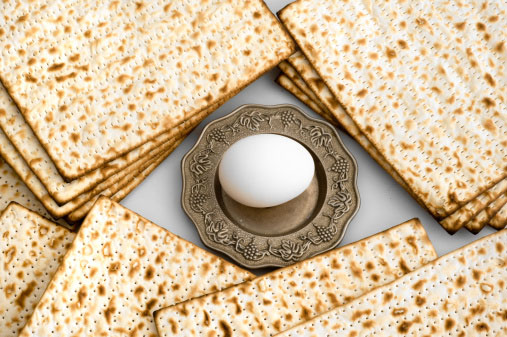 As early as the age of peek-a-boo, hiding and finding is a huge part of our development of object permanence. Dad leaves the room but it’s OK! He still exists and will come back in a minute. Just because we can’t see or hear something doesn’t mean it’s gone. Then, as we grow, the basic game of hide-and-seek excites us for an amazingly long stretch of years. I have to imagine, as my kids are playing hide-and-seek with me at the park, that the moments when I can’t see them—while panicky for me—are exhilarating for them. A sweet taste of future independence. Perhaps our spring rituals capture the excitement and expectation of these early forays into mystery and autonomy.

Both Passover and Easter share a theme of rebirth in springtime. For Christianity, Christ’s rebirth is symbolized in the egg. On the seder plate we place an egg as a symbol of hope, recalling the Israelites’ escape from slavery and birth as a free nation. Although in Judaism, the egg isn’t hidden, both rituals harken back to celebrations of the bursting forth of life at this season that far predate either religious tradition and are shared by many peoples around the world.

But when did people start hiding Easter eggs? Legend has it that the Protestant Christian reformer, Martin Luther, held egg hunts in which men hid the eggs for the women and children. Some Christians have claimed the egg as a symbol of Christ’s tomb, symbolizing his rebirth, and the hunt for eggs was likened to the hunt for Jesus in the tomb. There are images of Mary Magdelene with an egg as well. The Easter bunny didn’t enter the picture as the deliverer of those eggs until the 17th century.

The afikomen ritual clearly has very different origins, and there is no evidence that the hide-and-seek rituals are linked. Afikomen means “that which comes after” or “dessert” in Greek, and the hunt for it is a clever ploy to keep kids engaged in the often lengthy seder until the end. The kids’ elevated role is in keeping with the entire Passover experience; the holiday ritual is an elaborate scheme to pass the story of enslavement to freedom onto children.

How does it work? Early in the seder, the leader breaks the middle matzah on the table and leaves half of it as “dessert” to be eaten after the meal. Then after everyone has eaten, the leader cannot close the seder until the dessert matzah is found and eaten. Families enact this in myriad ways, but here are two popular options:

Either way, the ritual empowers children. It’s always fun to put one over on your parents. But the kids also learn that while they often feel less important than adults, at this moment they are powerful!

What about bringing these overlapping spring rituals together in an interfaith home? This is a matter for each family to decide. But some might find it comforting to know that egg painting in springtime is a tradition older than either Judaism or Christianity and it celebrates rebirth, hope, life and fertility. In fact, some Israelis even remember growing up decorating eggs for Passover, and might find it surprising that American Jews don’t generally approve of it on the grounds that in the United States, it is associated with Christianity. There are important historical reasons why some customs have become considered off limits in order for Jews to retain their particular status as separate from the dominant culture around them. But if you end up with a colored egg on your seder plate, you are far from alone. It is common enough that a great guidebook for grandparents of interfaith grandchildren is called, There’s an Easter Egg on Your Seder Plate.

How will you celebrate this year? Do spring traditions overlap or collide in your home? When planning a seder or Easter rituals, think about what you want to convey through the games and symbols you share. Think back with your partner or other family members about the rituals you each grew up with around the spring holidays and share what was meaningful—or confusing—about them. Articulate what you need out of the experience to feel personally and spiritually fulfilled. Together, explore the messages you hope your kids will take away from this season.