Introduction to The Bris (Brit Milah)

Return to the Guide to Birth Ceremonies for Interfaith Families.

According to traditional Jewish practice, on the eighth day after a boy is born, he is circumcised, that is, the foreskin is removed from the tip of his penis, and several blessings are recited. This ritual, called brit milah (commonly known as a bris), was first mentioned in the Torah, when God says, “Every male among you shall be circumcised… it shall be a sign of the covenant between Me and you” (Genesis 17:11). The brit milah may be postponed, however, if the child is not healthy enough to undergo the procedure.

According to traditional Judaism, there is a difference between circumcision and a brit milah. Traditionally, a brit milah is performed by an observant Jew who follows a prescribed procedure. A brit milah is typically performed by a mohel, who is a Jew trained in religious law and surgical techniques. Some families choose to use a pediatric surgeon to perform the circumcision and have a rabbi or cantor lead a ritual to commemorate the bris. For many years there were only Orthodox mohels, but now there are a growing number of progressive mohels who are receptive to the needs of interfaith families. The Reform movement maintains an online database of mohels. Often, parents will ask their rabbi, if they have one, to co-officiate at the brit milah.

The brit milah may occur in any location that will allow it, and usually occurs in the parents’ home or a synagogue. Some families host a bris ceremony outdoors after the circumcision is performed in a hospital.

The basic order of the ceremony is as follows:

Many parents and mohels add additional readings, songs and rituals to the basic ceremony.

Some families have the bris in a private room with just the parents of the baby and then celebrate the covenant with beloveds in a main room of the home or in a park.

Mohels are typically very accommodating to a family’s needs and will use anesthetic if desired and will help the parents find ways to add additional elements to ceremony. It is customary for mohels to charge a fee of several hundred dollars for their services, and if you need to bring in a mohel from out-of-town, you are expected to pay for their transportation and lodging. The mohel will provide precise instructions on what you need if you are hosting a brit milah as well as instructions on how to care for the baby in the days following the circumcision.

It is also typical to have a festival meal following the brit milah.

Some families host a covenant ceremony for their daughters on the 8th day as well to keep things egalitarian.

Other families choose to have a brit shalom: covenant of peace. It’s when there is a ceremony without the circumcision.

Portions excerpted and adapted from Ceremonies for Newborns: The Brit Milah Ceremony. Reprinted with permission from MyJewishLearning.com. 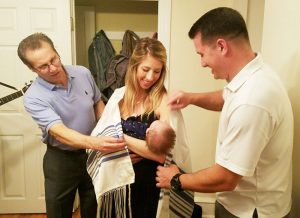