I signed up to take an Intro to Judaism class at Sam’s synagogue. When I went to (what I thought was) the first class, I sat amongst a classroom filled with 20 other adults. Everyone was taking the class for various reasons: to re-affirm their faith, learn the basics, teach their children who were going through Hebrew school. Then there was me — I was just curious to learn about Judaism.

Class began and I soon realized that this wasn’t the first class session. The class was trying to come up with a concrete definition of a Jew. Is it one’s actions or faith or name? Are you born a Jew? Are there specific qualities that make someone Jewish? Everyone was referring to specific Torah passages, famous historical rabbis and different articles and writings. Not having read any of the material, I quickly got lost in the conversation, and became more and more frustrated as the class continued. 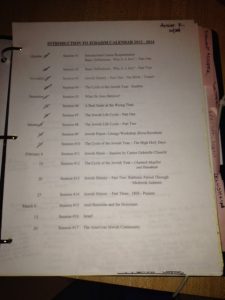 I talked with the rabbi after that first class to see if he could offer me some guidance. He gave me the syllabus, book list, and articles to read for the next class. He told me that this class could be used to convert to Judaism if I wanted to take that step.  In that moment, I felt under attack.  I only wanted to feed my curiosity about the religion.  I was insulted that the rabbi seemed to take my expression of interest as a chance to proselytize.

I got home that evening and stress-ate an entire 1lb bag of M&Ms. I didn’t want to continue the class because I didn’t feel spiritually ready to have my religious beliefs criticized.  After some careful prodding by Sam, I drudgingly forced myself to go to class the following week.

Fast-forward 12 weeks and I love the class!  Over the course of the class, I’ve gotten to know the rabbi and his mannerisms, and I now recognize that that first comment was not meant to be demeaning, but only to offer an opportunity to convert if I was so interested.  I have made it clear that I do not intend to convert to Judaism, but have used this class to reaffirm my own faith.

There is another Catholic in the class, which I am grateful for, although his mannerisms and occasional off-topic meanderings remind me of my grandfather.  The class has dwindled down to a core group of 7 people: 3 who were born and raised Jewish, 2 who converted to Judaism in their adult lives (including the rabbi’s wife), and 2 Catholics. It has been really interesting hearing the different stories and interpretations that everyone brings to the class.

A few class sessions ago, we talked about the different Jewish life cycle events, discussing the symbols and meanings behind the brit milah/baby naming, bar/bat mitzvah, and marriage. The marriage segment of the class turned into a Q&A about our upcoming wedding. The class was curious as to whether we plan to have the standard Jewish symbols and customs at our wedding, such as the chuppah, smashing the glass, etc. Those were easy yes and no questions that Sam and I had previously discussed.  Then they asked the why questions. Why are having those specific traditions and customs and how did we come to those conclusions. My answer was to read this blog! 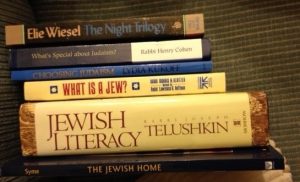 We are about half way finished the course.  So far, we have had in-depth conversations about a number of topics, including the afterlife, order of the Shabbat service, Torah, holidays, and history of Judaism.  The second half of the class is delving into the history of Judaism.  I am consistently doing the weekly readings (sometimes over 300 pages!), answering the study questions and always bringing my own set of questions. This prep work has made class a lot less frustrating and a lot more fascinating!