Interfaith Passover Before and After Kids 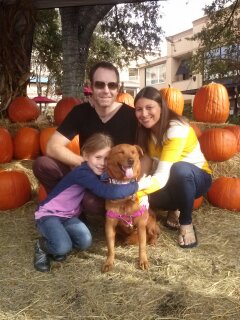 When my husband and I first met and began dating I decided to stay low key about a few things. I didn’t mention that I was Jewish for a while, knowing that he was not. He later told me that he figured it out by The Jewish Book of Why on my bookcase and didn’t know why I was being so weird about it. I also didn’t make any hasty plans to introduce him to my large, very loving, but somewhat overwhelming family even though he had already introduced me to his. I wasn’t event planning on it, until three months had passed and I sensed that he was wondering why I wasn’t inviting him to my family’s Passover seder.

I remember debating with my sister and my mother, asking them if Passover was really the best time to introduce my new boyfriend to my family—and not just my parents, but extended family, too—and not just any boyfriend, but my boyfriend who was not Jewish. How awkward would it be for him to participate in the Jewish rituals, the Hebrew prayers, the responsive readings all in front of a brand new family that was scoping him out as a potential future in-law? But, seeing that he wanted to be there and appreciating that, I eventually gave in and asked him, and he gladly attended.

Fast forward ten years and I think about that meeting often. It encompasses much of what I love about my husband: his confidence and comfort level to jump into something he’s unfamiliar with if it’s important enough to him, and his acceptance of others. But now that we have a daughter, who we are raising with both of our religions, it’s a bit of a different scenario.

When my parents first heard how we planned to raise our child they feared it would be confusing. But my feeling was that I would never ask my husband to give up his beliefs, as I’d never expect him to ask me to give up mine. Also, more and more families are being raised like ours, giving my daughter a sense of normalcy that maybe wasn’t there in past generations. And finally, and perhaps most important, my husband and I come to religion in a similar way. For us, it’s mostly about having a strong sense of family, creating family rituals, and being good people.

Though we are raising our daughter with both religions, in reality she mostly identifies with Judaism, mainly because my husband really doesn’t practice an organized religion. She went to a Jewish pre-school and attends services during Yom Kippur and Rosh Hashanah, and we celebrate holidays like Passover and Hanukkah, but we also celebrate Christmas and Easter.

So now, as that once relationship-defining Passover holiday nears, there is more to consider than just a potentially uncomfortable first meeting with the family. For one, Easter follows less than a week after Passover, and we celebrate both.

We typically celebrate Passover with my parents and my sister and brother and their families. My daughter looks forward to Passover. She is excited to see her cousins, search for the Afikomen and she practices for weeks to recite the Four Questions, which asks how this night is different from other nights and is recited by the youngest child at the seder.

She is equally excited about Easter. We spend time preparing for the holiday by dying Easter eggs, meeting the Easter bunny, setting out bowls of jelly beans and doing Easter-themed crafts (this year we plan to try out some of the Passover ideas for kids in this blog post).

We usually get together for brunch or dinner with my husband’s family, and our daughter enjoys spending time with her grandparents, doing an Easter egg hunt and of course, getting an Easter basket filled with chocolate, candy and treats.

At this point it’s still relatively easy. Our daughter is young, not quite six years old, and right or wrong, we don’t spend a lot of time discussing the meaning behind the holidays. We explain the basics and answer any questions and will go into as much detail as our daughter wants. But so far that hasn’t been a lot and again for us, it’s much more about spending time with family and participating in the rituals. I’m sure it will get harder as she gets older.

We have, of course, spent time talking about our religions. Our daughter questions everything and we don’t hold back in our answers. We talk about the fact that Daddy is not Jewish and the differences in religions.

We teach our daughter about tolerance and respect for all religions, because for us that’s really what it is all about. Whether we’re getting ready for our Easter egg hunt or practicing the Four Questions, we support and love each other, respect and celebrate our differences and take time to enjoy being together as a family.

Elizabeth Freid Vocke is married with one daughter and one rescue dog, Chloe. She is a full-time mother, writer and founder/chief strategist of marketing communications firm, Evoke Strategy, which she runs with her husband. Elizabeth enjoys reading, writing, playing tennis and most of all, setting all that aside to spend time with her family.