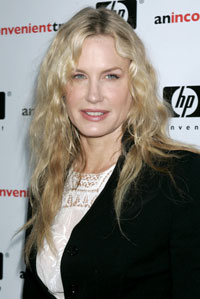 The lovely actress Daryl Hannah, 46, just appeared on “America’s Most Wanted” and said that she is making a documentary on the worldwide sex-slave trade and that she is spending her own funds to help Cambodian children escape from the trade. Hannah added that the subject was very personal: in 1978 she was almost kidnapped and forced into prostitution when she went on what she thought was a legit modeling job.

A few years after this incident, Daryl Hannah became a star when she played a mermaid in the hit movie, Splash. Besides acting, she is known for her work for the environment and, as noted above, for those exploited by the sex trade.

Daryl Hannah has often referred to her father as Jewish—but I didn’t know the whole story until writer Nina Amir told me about a book she compiled of Jewish recipes by Jewish celebrities (10 percent of the book’s earnings will go to Mazon, a Jewish charity to feed the hungry). Amir wasn’t sure “how Jewish” Hannah was when she contacted her.

The actress told Amir that her birth parents weren’t Jewish. Her parents divorced, and when Hannah was 7, her mother re-married Jerry Wexler, a wealthy Chicago Jewish businessman who was the brother of Haskell Wexler, an Oscar-winning cinematographer and film director.

It was a “Brady Bunch” family with Jerry Wexler and his four daughters (from his prior marriage to a Jewish woman) living in the same house with Daryl, her sister Page, and her mother. (Jerry and Darryl’s mother had another daughter together).

Daryl describes Jerry, now deceased, as an inspiring and loving man and she considers him her father. She also thinks of herself as Jewish.

Hannah worked on an Israeli kibbutz as a teenager and it’s there she learned to make matzah brei–the recipe she contributed to Amir’s book. If you want the recipe–visit Amir’s web site www.purespiritcreations.com.

I started to write an item for this column on Taylor Mays, a star freshman on the USC Trojan football team–Mays is black and Jewish. Then I looked at the calendar and realized my item would come out a day after Martin Luther King’s birthday.

So, I thought, why not profile celebrities who are black and Jewish? Problem is–there are a lot more famous black Jews than most people realize. I could devote several columns to famous black Jews if I covered each person in depth. But here are three such celebs that sprang to mind and are recently in the news.

Taylor Mays, 18, went from playing high school ball one year to being a starting safety on the Rose Bowl-winning University of Southern California team the next. He got the USC starting spot when a junior had a season ending injury during USC’s first game of the 2006 season. He is already being mentioned as a pro prospect. USC finished the 2007 season by beating Michigan 32-18 in the Rose Bowl on New Year’s Day.

Mays told the Los Angeles Times that his maturity can be traced back to the lessons he learned as he prepared for his Bar Mitzvah ceremony: intense study; repetitive practice; and memorization of every nuance of his responsibilities.

Taylor says his parents “molded who I became. I have seen them as examples.”

Jordan Farmar, 20, has had a very good rookie season so far as a guard with the Los Angeles Lakers. He is the only Jewish player now in the NBA and he’s the first Jew to play pro ball since Danny Schayes retired in 1999. 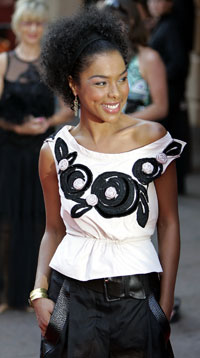 Like Taylor Mays, Farmar is the son of Jewish mother and an African-American father who is not Jewish. Jordan’s dad—Damon Farmar–was a top college athlete and a mentor to his son.

Jordan’s parents divorced when he was young and his stepfather is an Israeli. Like Mays, Jordan was a bar mitzvah and identifies as Jewish.

After two very good seasons playing for the University of California-Los Angeles, Jordan Farmar decided to turn pro and the betting is that he will be the starting Lakers point guard in the not-too-distant future.

Actress Sophie Okonedo, 37, was a respected British stage actress before she co-starred in Hotel Rwanda, (2004)–but very few people knew her name. A best-supporting actress Oscar nomination for Hotel Rwanda gave Okonedo tremendous publicity and she was given the opportunity to co-star in some big budget films like Stormbreaker.

Okonedo was nominated for a 2006 Golden Globe for best actress in a TV mini-series or movie for her role in HBO’s Tsunami: The Aftermath.

Sophie’s parents split up when she was very young and she was raised by her mother in relative poverty (“but we always had books,” she says).

No, Okonedo doesn’t have much in the way of a formal religious background–but she does certainly identify as Jewish.

Speaking of the Globes–congrats to Kyra Sedgwick for her Golden Globe for best actress in a television drama. Sedgwick is the star of the TNT detective series, “The Closer.”

Sedgwick, 41, grew-up in Manhattan, the daughter of a Jewish mother and a Protestant father whose family came to America on the Mayflower. Neither of her parents were religious, but Sedgwick studied Jewish culture and religion on her own as a teenager. While she hardly practices today–just an annual Passover seder–she very much identifies as a Jew.

Congrats also to Peter Morgan, the British screenwriter of The Queen. He won a Globe for best motion picture screenplay. Morgan is the son of a German Jewish refugee to Britain. His father met and married Peter’s Polish Catholic mother in London. She was a refugee from Stalin.