Interfaith Celebrities: Take Me Out to the Ballpark with Emmy Rossum

Here’s this year’s list of Jewish and interfaith Major Leaguers. This list was prepared with the aid of Jewish Sports Review.

The number of players is down this year. The Dodgers cut outfielder Gabe Kapler, 35, at the end of spring training. Also, Texas Rangers pitcher Scott Feldman, 29, is recovering from surgery and remains out indefinitely. 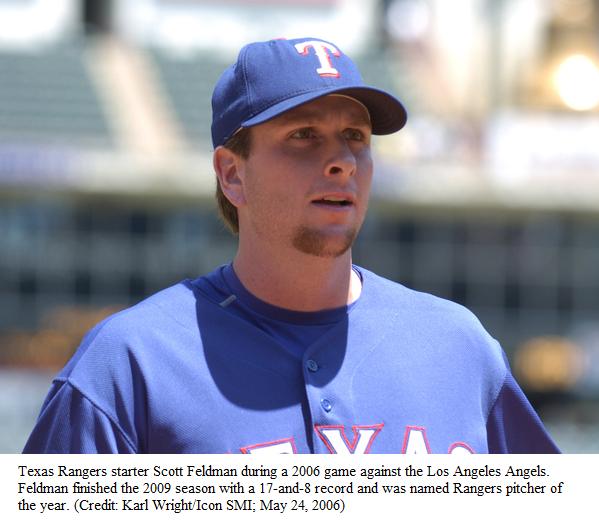 Last fall, when the San Francisco Giants were playing the Texas Rangers in the World Series, I helped a reporter for the San Francisco Jewish paper, j. weekly, get in touch with Feldman’s family. Feldman grew up near San Francisco and his parents still live in the area. Feldman is the son of a Jewish father. The paper reports:

Feldman was born to a Jewish father, Marshall, and mother of another faith, Joyce, who traveled all the way from Burlingame to Cleveland when their son made his major league debut in 2005. Although Scott didn’t have a bar mitzvah or much of a Jewish upbringing, his family did belong to Peninsula Temple Sholom in Burlingame for a spell.

The full article also includes information on the Jewish presidents, owners and managers of the Rangers and the Giants.

The following is a list of the names of the Jewish players on the Major League roster:

Craig Breslow, 30, is a relief pitcher for the Oakland Athletics. Breslow, now in his third season with the A’s, was quite effective in 2010, notching 5 saves in 75 appearances. The former captain of the Yale University baseball team has a degree in biophysics and biochemistry. The Sporting News named him the “smartest athlete” in any professional sport. (The 20-player list was based on intellectual ability, not game smarts.)

Sam Fuld, 29, is a left fielder for the Tampa Bay Rays. Fuld played only 19 games with the Cubs last season and was traded to Tampa in the off-season. He is on the roster as the fourth outfielder and is off to a great start in 2011.

John Grabow, 32, is a relief pitcher for the Chicago Cubs. He suffered a serious knee injury in 2010. The team is hoping he’ll return to form in 2011.

Ian Kinsler, 28, plays second base for the Texas Rangers. Kinsler, who put up All-Star numbers during his first four seasons, was injured for much of 2010, forcing his hitting stats way down.

Jason Marquis, 32, is a pitcher for the Washington Nationals. Alternately brilliant and ineffective during his ten-year MLB career, Marquis was out for a good part of 2010 with injuries. He did show good control at the very end of 2010.

Danny Valencia, 27, plays third base for the Minnesota Twins. He was called up to the big club in June and had a good rookie season, hitting .311, with 7 home runs.

Kevin Youkilis, 32, plays first base for the Boston Red Sox. He was a 2008 and 2009 All-Star and was posting his usual great numbers in 2010 when an injury on August 2 sidelined him for the rest of the year.

Marquis, Youkilis and Breslow are the sons of two Jewish parents and all had a Jewish religious background while growing up.

Kinsler, Braun and Fuld are the sons of Jewish fathers. All four were raised secular.

Grabow, Davis and Valencia are the sons of Jewish mothers. Valencia was raised Jewish and had a bar mitzvah. Grabow was raised secular. Davis has told the press how he has explored the history of his mother’s family and the lives of his family members who died in the Holocaust.

Actress Emmy Rossum, 24, isn’t exactly a household name, but she’s getting there. She has gradually built an impressive and varied body of musical, film and TV credits. Currently, she co-stars in the Showtime cable series, Shameless, which premiered in January and recently concluded its first season.

Rossum’s music video of the song “Slow Me Down” has gotten over five million hits on YouTube.

Based on a British TV series, the Showtime version is set in a run-down Chicago neighborhood. William H. Macy stars as Frank Gallagher, the alcoholic single father of six children, ranging in age from toddler to young adult. Frank spends most days drunk and the kids fend for themselves. Rossum plays the oldest child, Fiona, who works full-time at various low-paying jobs and holds things together with the help of whatever pocket money her siblings can pitch-in.

Rossum, whose full first name is Emmanuelle, has been performing professionally since she was seven years old. From ages seven to twelve, she sang with the Metropolitan Opera Company’s Children’s Chorus. In 2000, she made her film debut as an Appalachian orphan in Songcatcher. She sang a duet with Dolly Parton on the film’s soundtrack.

In 2004, Rossum’s breakthrough role came in the blockbuster disaster film, The Day After Tomorrow, co-starring interfaith actor Jake Gyllenhaal. In it, Rossum co-starred as a smart girl who meets Gyllenhaal at an academic competition for high school students. As the world goes into a new ice age, Rossum and Gyllenhaal snuggle together in the New York Public Library.

Early in 2005, Rossum co-starred in the musical film production of Andrew Lloyd Webber‘s The Phantom of the Opera. Her operatic singing ability was a major factor in her getting the coveted role. While Rossum’s performance was praised (nabbing her a Golden Globe nomination for best actress along the way), Phantom didn’t turn out to be the blockbuster that the stage version was. Throughout the following years, she continued to star in films that were mostly flops with critics and domestic audiences alike.

Shameless came along at a great moment in Rossum’s acting career. She needed a hit to regain the momentum she lost with the lackluster performances of her last four films.

Recently, I pieced together most of Rossum’s family background. Her mother, Cheryl Rossum, grew up in a Scarsdale, NY Jewish family. Rossum is Cheryl’s maiden name and it seems as though she was never married to Emmy’s father. Cheryl is a corporate photographer who lives in Manhattan, which is where Emmy grew up.

In February, Rossum gave an interview to Venice Magazine in which she confirmed that she is of interfaith background. In the following excerpt of that interview, she reveals details of how various religions shaped her childhood.

Venice: Tell us how an only child, who is a Jewish girl from New York, prepares to play the eldest of seven kids of an Irish Catholic family in Chicago? What attracted you to this role?

Rossum: Just that! [laughs] I don’t think of myself as a “Jewish girl from New York.” I mean, those are all things that I am, but as an actor you want to stretch and do things that are different from who you are. I would never want to play a character who is exactly like me; it would be contrary to the point of what acting is. For me it was fun because I come from a single parent household and I’m an only child, so family is something that I personally have always craved. I wanted to surround myself with people who were warm and nurturing, and even a little dysfunctional was more than welcome too. It’s funny, because a lot of the kids who make up the Gallagher family on the show are only children. Only one of us has siblings in real life. It’s interesting that we all gravitated to each other so easily and to the material.

Venice: How did being an only child affect you?

Rossum: I was raised by my mom who was very much my mom and not my pal. I didn’t watch a lot of TV. I remember watching a lot of Shirley Temple movies and going to the ballet and the opera. I had a funny upbringing because my mom is Jewish, my dad is a Wasp, and my mother traveled a lot so I always had babysitters and all of them were Irish Catholic. I loved sweets and my babysitters would always bribe me with treats if I would go to Mass with them. So almost every day I would wind up in Catholic Church. I’ve got guilt from every direction!