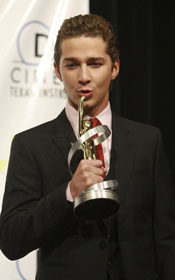 Everything that Shia LeBeouf has today, he did himself. He became a stand-up comedian at 10 to support his family after his father became a heroin addict. He stars in Disturbia, a suspense film coming out Friday, April 13, 2007.
Despite his young age (21), actor Shia LaBeouf is almost a hero of mine. I am constantly amazed at what a “mensch” he is. The word, or term, mensch, as it is used in Yiddish, refers to a person of either sex who talks straight, is a good person and shoulders his responsibilities.

Let’s start with his beginnings, which sound like a modern-day version of a Dickens tale. He was born in 1986 in a rough section of Los Angeles where his parents, whom LaBeouf describes as “hippies,” lived. His father, who isn’t Jewish, and is of mixed Louisiana Cajun and WASP ancestry, was a circus clown and a mime. His mother, who is Jewish, was a dancer.

His first name, Shia, is a Hebrew name, meaning “gift from God.” His last name is a very odd Louisiana French corruption of the French word for beef (le boeuf).

Sometime before Shia reached the age of 10–he has never provided a year-by-year timeline–his father got hooked on heroin and his parents divorced. His mother struggled to get by financially. Around the age of 10, Shia auditioned at local clubs and actually got hired as a stand-up comedian. (He got a work permit after he was hired). The money was not for luxuries–he and his mother really needed any cash he could bring in.

Shia flipped through the Yellow Pages, found an agent, and got a few small parts in TV shows and movies. In 1999, he was cast as the co-star of the Disney Channel series, “Even Stevens.” The show was a modest hit and ran until 2003.

Shia says of “Even Stevens”: “I grew up on that show and it was the best thing that had ever happened to me. Took me out of my house, it was real dramatic at that time. My dad was on drugs–heroin and all kinds of wild (stuff) and he was in a rehab facility. My mom was trying to hold down the fort and that wasn’t working. So when the show came along it was a savior. It saved my life, my family’s life.”

What’s so cool about Shia is that he talks about his early rough childhood in a matter-of-fact way. Without getting dramatic, he’ll describe how labor laws required that a parent be on the set when he was filming his TV show, but his mom had to work. Ironically, his father was just out of rehab and needed a job, so the studio hired him just to sit on the set. You sense that Shia does not blame his father for the family’s troubles. Indeed, he says he is close to both his parents. Shia just relates what happened and, without bragging, what he did to cope. And how many kids have the guts and talent to go out and get their own roles at his age?

Without providing too many details, Shia has mentioned that he was bar mitzvahed at 13. Clearly, in his case, the phrase “today, I am a man” was much more apt than it is with most bar mitzvah boys.

In 2003, Shia co-starred in Holes, a well-reviewed movie from a best-selling children’s book. In an interview around the time Holes came-out, Shia said that he was then playing ball for a Chabad-sponsored baseball team. He also mentioned that young actor Khleo Thomas, one of his co-stars in Holes, was the son of a white Jewish mother and an African-American father. Thomas, then 14, hadn’t had a bar mitzvah and asked Shia about the ceremony. Shia put Thomas in touch with his rabbi and Thomas had his bar mitzvah while the movie was being filmed.

Since 2003, LaBeouf has not followed the career path of so many young performers, appearing only in “dumb” teen movies and/or abusing drugs and drink. Rather, he has stayed out of the gossip pages and has played varied roles in very different films. Most of his movies have gotten decent notices.

He starred opposite Will Smith (I, Robot) and Keanu Reeves (Constantine). He played a “druggy” campaign worker (Bobby) and a would-be gangster (A Guide to Recognizing Your Saints).

Shia’s new film, Disturbia, opens on Friday, April 13. He plays a young man (“Kyle”) who becomes sullen after the death of his father. Kyle gets into trouble and is sentenced to a period of house-arrest. In a plot twist similar to Rear Window, Kyle spends a lot of time looking out his windows and observing his suburban neighbors. He begins to suspect that one of them (David Morse) is a serial killer. (Carrie-Ann Moss plays Shia’s mother and Sarah Roemer plays his love interest).

Disturbia has gotten good advance “buzz” and Shia was on Jay Leno last week to promote the film. The subject of food came up and Shia explained that it was Passover and he was eating gefilte fish. He then explained what gefilte fish is.

In 2004, Shia contributed this short essay to the book, I Am Jewish. It is a collection of statements by well-known Jews inspired by the last words of journalist Daniel Pearl. Pearl was murdered by Islamic terrorists because he was a Jew. The book was edited by Judea Pearl, Daniel’s father.

First off, let me make clear that I am in no way a Jew who attends Shabbat every Friday or puts t’fillin on before I go to sleep.

I am what you would call a claimer Jew. See, I claim to be Jewish because it is beneficial to be Jewish. I benefit from saying I am Jewish. How?

I have a personal relationship with God that happens to work within the confines of Judaism.

Judaism to me is the name of the telephone in my heart that allows me to speak to God.

Really, I feel cocky when I say I am Jewish, not bad cocky, but good cocky. Because what I am really saying is that I am one of the few chosen ones out there. I made it; God chose me and I take pride in that.

I told you Shia LaBeouf was a mensch.

Actress Amanda Bynes poses for photographers on the red carpet at the 2006 CFDA Fashion Awards in New York City June 5, 2006.

Forbes magazine has just come out with its list of the top 10 earning Hollywood stars under 21. Ranked #2 and #5 on the list, respectively, are interfaith celebrities Daniel Radcliffe, and Amanda Bynes. Both are the children of fathers of a different faith background than their Jewish mothers. Radcliffe says he is not religious at all and Bynes recently has made clear that she identifies as Jewish. (I am still unclear about her religious upbringing).

Bynes is best known as the star of the WB TV series, “What I Like About You,” which ended last year. She is now building a film career and her 2006 film, She’s the Man, did very well at the box office.

Radcliffe, of course, is best known as the star of the “Harry Potter” movies. Currently, the young English actor is starring on the London stage in a revival of Equus, a famous play written by English Jewish playwright Peter Shaffer that was first staged in 1973.

Much press attention has been given to the fact that Daniel Radcliffe appears totally nude in an Equus scene. Well, I know someone who saw the London stage production from close-to-a-front row seat. He tells me that Daniel looks quite fit and while he may not be religious, it appears that he had the procedure that almost all Jewish boys have when they are eight days old (a procedure rarely performed nowadays on English Christian boys). So, it seems like Daniel is a “certified tribe member” in at least one respect.