Texas Rangers second baseman Ian Kinsler is a promising young player from an interfaith family. The 24-year-old hit .286, with a .347 on-base percentage, 14 home runs and 11 stolen bases in an injury-shortened season last year.

The start of the major league baseball season and Passover are two annual milestones that proclaim that spring is finally here. This year baseball’s opening day (Monday, April 2) actually coincides with the date of the first night of Passover (of course so does the NCAA basketball championship game, but that’s a whole other story).

As in most recent years, this season about half the active major leaguers identified as Jewish by Jewish Sports Review, a bimonthly newsletter, have interfaith backgrounds.

Jewish Sports Review is the premiere source on “who is Jewish” in baseball (and many other sports) on the high school, college, and pro level.

The Review is a non-profit labor-of-love by two guys I consider friends and virtually every good source on “who is Jewish” in baseball is built on the Review’s hard work. So, I think it’s important to credit them. The content is not available online, but you can order the Review at jewishsportsreview.com

Before discussing the players, I thought readers might like to know the “inside scoop” on how the Review finds out a player is Jewish and what their definition of “Jewish” entails.

Every once in a while, the Review adds a player because he is clearly identified as Jewish in a very good news source like an interview. More often, they decide to contact a player (or a player’s representative or very close family member)–because of a tip or because the player has a “Jewish sounding” name.

If they are told (by the player or his rep) that the player has one or more Jewish parents–they then inquire if the player was raised in and/or currently adheres to a faith other than Judaism. If the player answers “yes” to either of those questions–that ends the Review’s inquiries and they don’t cover the player.

On the other hand, if they are told the player was raised Jewish or “nothing”–the Review then asks if the player has any objection to being identified as Jewish in the pages of the Review. If not, then they add him.

Kevin Youkilis, former first baseman for the Boston Red Sox, is one of the best of an OK bunch of Jewish major leaguers.

The best of the bunch is probably Youkilis, who was very productive as a non-traditional leadoff hitter and first baseman for the Sox last year. He has below-average power for his position, but he draws tons of walks, which led to his nickname in the minor leagues, “The Greek God of Walks.” The one with the most distinguished career–and really the third-best Jewish ballplayer ever, after Sandy Koufax and Hank Greenberg–is Green, who is in the tail end of his career and may be a bench player by the end of the season. But the one most likely to get his family great Hanukkah gifts this year is Marquis, who signed a 3-year $21 million deal in the offseason despite being one of the worst pitchers in the majors last year. Kinsler, a young second baseman with good speed and power, and Hirsch, a pitcher only a year removed from top prospect status, could both end up having productive careers as major leaguers.

Interestingly, the Review recently decided to discontinue its practice of noting whether a player from an interfaith background has a Jewish father or a Jewish mother. However, they will answer subscriber questions about this and if any reader of this column wants to write me and ask, I will answer.

The Review also periodically publishes an updated list of all the Jewish players who have ever made the majors. This list includes some guys with interesting interfaith backgrounds. For example, there’s Micah Franklin, an outfielder who played for the St. Louis Cardinals in 1997. Franklin, who is the child of a white Jewish mother and a non-Jewish black father, also played for pro ball for a Japanese team with a very funny name: the Nippon Ham Fighters. When he was on this team a lot of people joked that Franklin was helping to make Japan a kosher country.

Their “all-time” list includes a few converts to Judaism, including Elliott Maddox, an African-American outfielder who played for the New York Yankees and Mets and is quite active in the Jewish community; Joel Horlen, a very good pitcher who mostly played for the Chicago White Sox; and Steve Yeager, an excellent defensive catcher who mostly played for the Los Angeles Dodgers and was World Series co-MVP in 1981. Yeager converted when he married the daughter of Holocaust survivors and–give the guy a lot of credit–he was circumcised at 40.

Like with any list of famous Jews, there is some controversy about “who is a Jew.” Just two undisputedly Jewish players are in the Baseball Hall of Fame: Greenberg and Koufax. But, there’s Lou Boudreau, a Hall-of-Fame shortstop whose mother was Jewish. However, Boudreau’s parents split up when he was very young and he was raised by his father in his father’s Christian faith. It was not even known, until long after he retired, that his mother was Jewish.

The Review–to avoid endless questions–covers Boudreau as a footnote to its all-time list and describes his upbringing. Meanwhile, Jewish baseball fans continue to bat around Boudreau’s Jewish status in e-mails.

So, play ball! (And enjoy your matzah ball soup).

Checking in with the Chiklis Family 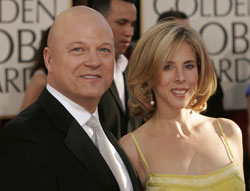 Michael Chiklis, star of “The Shield,” and his Jewish wife Michelle Moran are members of a prominent Reform temple in Los Angeles. REUTERS/Fred Prouser

“The Shield,” FX cable network’s gritty police show, begins its sixth season on Tuesday, April 3 (10 p.m.). Returning in the lead role of Detective Vic Mackey is actor Michael Chiklis , who has won an Emmy and a Golden Globe for portraying Mackey.

Chilkilis, 43, grew up in Massachusetts, the son of Greek immigrant parents. Sources are unclear whether the actor still practices the Greek Orthodox faith he was born into.

In 1992, Michael married former actress Michelle Moran , who is Jewish (I’m not sure how she got her last name–maybe a stage name). The couple has two daughters: Autumn, 13, and Odessa, 7.

Michael and Michelle are members of a prominent Los Angeles Reform temple. Autumn attended the temple’s day school through sixth grade graduation and Odessa is still enrolled there. (The temple’s newsletter has the nice practice of congratulating Michael every time he wins an acting award).

Last September, Autumn had what one paper described as a “glitzy bat mitzvah.” The entire cast of “The Shield” attended. Michael, who can sing, joined his buddies from the famous rock band Boston to entertain the reception guests.

Autumn Chiklis has appeared in 19 “The Shield” episodes to date as Cassidy Mackey, Michael’s character’s daughter. I don’t know if Michael has eased up since, but in 2004–when his daughter was only 11–he told an interviewer that Autumn was still too young to see entire episodes of “The Shield.” Michael screened his daughter’s scenes for her, but didn’t let her see complete episodes.

Last summer, Michael Chiklis joined about 80 prominent Hollywood figures, Jewish and non-Jewish, in signing a pro-Israel petition that was published as a full-page ad in the Los Angeles Times. The ad appeared as the Lebanon War raged.