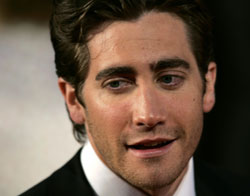 Jake Gyllenhaal, who became a star with Brokeback Mountain, is the son of a Jewish screenwriter and a non-Jewish director.

Opening March 2 to great reviews was Zodiac, about the serial killer who terrorized the San Francisco Bay Area in the late ’60s and early ’70s. Jake Gyllenhaal, 26, stars as Robert Graysmith, a real-life San Francisco Chronicle newspaper cartoonist who became obsessed with catching the Zodiac Killer. Robert Downey, Jr. co-stars as a newspaper reporter who becomes famous after the Zodiac Killer contacts him.

Jake’s father, film director Stephen Gyllenhaal, isn’t Jewish. While his last name is Swedish, he was raised in the Swedenborgian faith, a small Protestant sect founded in the late 18th century.

Jake’s mother, screenwriter Naomi Foner Gyllenhaal, is Jewish and her credits include the scripts for Running on Empty and Losing Isaiah. In 2005, Naomi gave several interviews to the Jewish press because she was the screenwriter of Bee Season, a film about a religious Jewish family.

She said that she was raised with only a little formal exposure to Judaism and that, in effect, social liberalism substituted for religion in her household. She added that this is the way she raised Jake and his sister, actress Maggie Gyllenhaal.

Still, Jake has referred to himself as Jewish in a couple of interviews and he had a sort-of-Bar Mitzvah on his 13th birthday. He said his “Bar Mitzvah” included “saying a few prayers with my mother” and “howling with my father” and then spending the day volunteering at a homeless shelter with some friends. 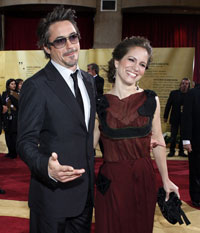 Robert Downey, Jr., 41, has long been one of the best actors in Hollywood and he has turned in many stellar performances. However, for decades his career was repeatedly derailed by drug abuse leading to strange behavior. While Downey always stayed sober on the film set, he was frequently arrested for drug-related offenses when not working on a film.

He even spent some months in state prison in 1999, but continued to abuse drugs until 2001, when he finally managed to get off of them. He has been sober since 2001.

Zodiac looks to be the biggest hit that Downey, Jr. has been in since he “got straight” and is another milestone in his career comeback.

Downey credits his wife, Jewish film producer Susan Levin, who he met in 2003, with helping him maintain his sobriety. The couple married in a Jewish ceremony in 2005.

This is not quite accurate. The elder Downey’s father was Jewish, but his mother was Irish Catholic. I don’t believe that the elder Downey was raised Jewish.

But, like a lot of people, Downey, Jr. is what I call “situationally Jewish.” He married a Jewish woman who is very important to him and Judaism is important to her. (He said that she insisted on a Jewish wedding). So, since meeting Susan Levin, Robert has emphasized his Jewish ancestry.

Downey, Jr. has also defended Mel Gibson—noting first that “I am Jewish” and then proceeding to tell the press that he doesn’t believe Mel is a hater. Well, there’s a history behind Downey’s defense of Gibson. While Gibson has many faults, and I do believe that he truly holds, he is known to be kind to persons in trouble–especially those with substance abuse problems.

Gibson and Downey became friends when the made Air America together in 1990. In 2003, Downey was cast as the star of the movie, The Singing Detective, which Gibson was producing. Because of his drug history, insurance companies were demanding a huge premium for a ‘performance bond’ for Downey. No film can be financed without such a bond–it protects the investors in case a lead actor cannot complete a film. Mel Gibson reached into his own pocket and paid the insurance premium, thus allowing Downey to hold on to the starring role. While not a box-office hit, The Singing Detective was an important step in Downey’s comeback and he certainly has reason to be grateful to Gibson and to defend him while speaking to the press.

Ronnie and Roth Make the Hall

Last night, the Rock and Roll Hall of Fame inducted quite a few new members, including Van Halen, whose original lead singer was the Jewish David Lee Roth, 52, and the Ronettes, the ’60s “all-girl” singing group that was led by Ronnie Spector, 63.

A two-hour program of highlights of the induction ceremony can be seen on VH1 on Saturday, March 17 at 9 p.m.

Ronnie Spector was born in New York City as Veronica Bennett to a white father and a black and Native American mother. In 1961, Ronnie joined her sister, Estelle, and her cousin, Nedra Talley, to form the Ronettes.

The Ronettes, who were really sexy and could really belt out a song, had a string of big hits in the ’60s, including the classic, “Be My Baby.” This great tune was written by the Jewish songwriting trio of Phil Spector, Jeff Barry and Ellie Greenwich, and was produced by Phil Spector–utilizing his famous “Wall of Sound” production technique. (Youtube has videos of about eight different in-concert versions of this song, sung by the Ronettes.)

In 1968, Ronnie wed Phil Spector. The marriage was a nightmare, with “crazy Phil” keeping Ronnie a virtual prisoner in his mansion until she finally got the courage to leave him in 1972. They divorced in 1974.

Ironically, Phil is being tried for murder (his trial starts March 19) the same month Ronnie is being honored. As most people have heard, Phil Spector, a member of the Rock and Roll Hall of Fame, was arrested in 2003 for shooting and killing actress Lana Clarkson in his Los Angeles mansion. Phil Spector’s arrest followed decades of bizarre behavior that included pulling guns on Ronnie, John Lennon, and Leonard Cohen.

Ronnie, who wasn’t born Jewish, went on to marry another Jewish guy, Jonathan Greenfield, her current manager, and they had two sons together. Their sons have been raised Jewish.

Ronnie Spector has long referred to herself as “Jewish”–on stage during her annual Christmas concert tour and in some personal interviews. Sources who know Ronnie and her husband tell me that it is possible, but unlikely, that Ronnie has formally converted to Judaism. Ronnie, I am told, comes off as quite ‘fragile’ in interviews and nobody wants to press her about this detail.