Interfaith Celebrities: Of Hip Hop, Heroes and the Oscars 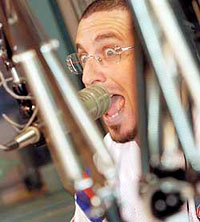 The show, which began in mid-January, has 10 white rappers compete, via different performance-related challenges, for a $100,000 prize. There are 10 episodes.

“White Rapper” is hosted by
Michael Berrin, also known as MC Serch. Berrin may not be a “rap legend,” as VH1’s website calls him, but he was a co-founder of Third Bass, a well-known rap group from the late ’80s and early ’90s.

Berrin, who is Jewish, worked until recently for a very popular Detroit radio station that mostly plays hip hop music and whose listening audience is mostly black. He was the only white DJ on the station since Casey Kasem worked for the station back in the ’50s.

As reported in a January 25 issue of the Detroit Jewish News, Berrin, 39, and his wife, Chantel, are members of Congregation Sharrey Zedek, a large Conservative synagogue in suburban Detroit.

In a 1993 profile in the News, Chantel, who is black and a convert to Judaism–talked about her conversion and Michael talked about race and religion.

Here are a few excerpts from that piece:

Chantel converted to Judaism when they decided to have children. “My husband did not pressure me,” she says. “We could not have a religious wedding because I was not Jewish, and he married me anyway. Marriage is a big deal [in Judaism], so I decided upon [the conversion] for myself.”

The Berrin family always check “other” or the “multicultural” box when to comes to race. “It’s not fair for a child to have to choose in claiming one parent or the other when [a child is] a combination of both,” says Chantel. “When people ask me what race my kids are, I say, ‘human,'” says Michael.

“It’s actually quite funny,” says Michael. “As contemporary as my family is–being active in hip-hop and in an interracial marriage–we happen to be very traditional when it comes to Judaism.”

On Jan. 29, Jessalyn Gilsig, 36, joined the cast of the hit NBC show “Heroes” as the mother of teenage “hero” Claire Bennett (Hayden Panttiere). Gilsig, a very pretty actress who co-starred on TV’s “Boston Public” and “Nip/Tuck” (as Gina Russo), will appear in a fairly large “arc” of “Heroes” episodes this season.

Gilsig was born in Montreal, the daughter of a Jewish father and a non-Jewish mother. In a 2000 interview, she said that she grew up celebrating the major Jewish and Christian holidays. In 2005, she married Jewish producer Bobby Salomon in a Jewish wedding and the couple had a daughter last September. Salomon, Gilsig says, was the “cool guy” in their Montreal high school (quarterback of the football team) and they briefly dated in high school. He called her when he moved to Hollywood in 2002 and their friendship soon became a renewed romance.

On Monday, Feb. 19, “Heroes” will introduce Israeli character Hana Gitelman, a new “hero.” Hana’s grandmother fought the Nazis and her mother fought in the Six-Day War. Both were killed in a Palestinian terrorist attack, which Hana survived. Playing Hana is actress Stana Katic, who I don’t believe is Jewish in real life.

Hail to The Queen

British film director Stephen Frears, 65, is nominated for the best director Oscar for his work on The Queen. This film covers the period following the death of Princess Diana in which the British Royal family was heavily criticized for not appearing to share the country’s sadness about Diana’s death.

Frears mostly directed British TV shows until his 1985 film, My Beautiful Launderette,became an unexpected box office and critical hit. Since then, he has directed a number of other critically acclaimed films, including The Grifters, High Fidelity, Dangerous Liaisons and Dirty Pretty Things. His 2001 film, Liam was about British anti-Semitism in the 1930s. While an honorable effort, Liam is not ranked among Frears’ best films.

Stephen Frears is the son of an Anglican (Episcopal) father and a Jewish mother. He was raised an Anglican and didn’t know his mother was Jewish until he was in his late ’20s. His brother, who knew the truth, told Stephen about their mother not long after Stephen married his current wife, highly respected Jewish painter Annie Rothenstein.

Frears, who is not religious, gave an interview in 2001 to The Jewish Journal of Greater Los Angeles. He told the Journal
that he thought his mother hid being Jewish because of the low-key anti-Semitism so prevalent in Britain–especially right after World War II. Frears added that this atmosphere contrasted with the much more open attitude about being Jewish he found when he got a chance to work in America.

Frears’ comment is somewhat seconded by a personal anecdote told by British actress Helen Mirren, 61, who played Queen Elizabeth II in The Queen. Mirren, who is a virtual shoo-in for the best actress Oscar for her performance, is the daughter of a Russian Orthodox aristocrat who got stranded in Britain by the Russian Revolution and an English Christian mother. While her parents were liberals, she said, they hit the roof when they found out her first serious boyfriend was Jewish. They weren’t “that liberal,” she said.

Peter Morgan, who wrote The Queen, is nominated for an Oscar for best original screenplay. Morgan’s Jewish father, Arthur Morgenthau, fled Nazi Germany for Britain just before World War II. His mother, a Polish-born Catholic, fled her native country for Britain following the Soviet occupation of Poland right after the war. His parents met in London.

Morgan, 43, calls himself “spiritual,” although he was raised in no faith. His wife, he says, is a practicing Roman Catholic and their children are being raised in her religion.