As I was putting together this column, I realized that three celebrities of African-American and (white) Jewish background have new projects out at just about the same time. There’s no significance to this coincidence, except perhaps that the identity of people of mixed race is more interesting in the current presidential election. After all, Sen. Barack Obama, a man of mixed race, may be elected president next month. Obama’s ancestry is a constellation of racial and religious groups and his wife, Michelle, has a first cousin who is an African-American rabbi. 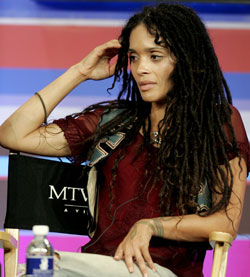 Lisa Bonet, 40, returns to TV in a prominent recurring role in the new ABC drama series, Life on Mars. Life on Mars tells the story of Sam Tyler (Jason O’Mara), a New York City police detective who is hit by a car in 2008. The next thing he knows he is somehow transported back in time to 1973. Sam tries to understand what is happening to him. Meanwhile, everyone in 1973 knows him as a police detective assigned to a crime-ridden precinct.

Bonet plays Maya Daniels, a 2008 police officer who is Sam’s girlfriend. The pilot episode established their relationship in 2008. In later episodes, Sam thinks of Maya and, in flashback, recalls their relationship and fantasizes what he and Maya would have done if he was back in 2008. Veteran Jewish actor Harvey Keitel plays Sam’s boss in 1973.

Bonet, who was born in 1967, is the daughter of an African-American father and a (white) Jewish mother. Her parents divorced when she was very young and she was raised by her mother, mostly in Los Angeles and New York. Details are a bit sketchy, but my impression from various interviews and one personal contact is that Lisa was raised with some Jewish religious background.

Lisa had quick success as a child actress and was appearing in commercials by the time she was 11. In 1984, she was cast as Bill Cosby‘s oldest daughter, Denise Huxtable, in the sit-com The Cosby Show. The series was an almost instant monster hit and Bonet became quite famous.

But, perhaps, she grew up too soon. In November 1987, when she was just 20, she eloped with rock musician Lenny Kravitz, then a virtual unknown. As Bonet recalled in a magazine interview, they had something somewhat unusual in common:

It was interesting when we were first finding out about each other, that our backgrounds were so similar. When I first told him my mom was Jewish, and he said “So’s my dad,” I thought that was both unusual and enchanting. I felt like, “OK, here’s someone who really knows how it is.” And I think I trusted him a little more with my feelings and let him inside a little more than I ordinarily would have.

Kravitz, now 44, is the son of a white Jewish father, TV news producer Sy Kravitz, and a black mother, actress Roxie Roker (Roxie is best known for her co-starring role on The Jeffersons. Lenny’s parents divorced in 1985 and Roxie Roker died in 1995). Lenny Kravitz was raised without religion. However, it is clear from interviews and profiles that Lenny, while proud of his “Jewish side,” has religiously identified as a Christian since 1996.

Just before she eloped with Lenny, Bonet made the film, Angel Heart, which included very graphic nude scenes. Cosby advised her not to make the movie, but she ignored his sage counsel. The film turned off a lot of her Cosby Show fans and it began a downward career spiral for Bonet.

Bonet’s personal behavior turned erratic in 1987 and, as a consequence, she was written out of a lot of Cosby Show episodes in 1987-88. In fall 1988, Cosby made sure she got a role in the Cosby Show spinoff, A Different World. But she was fired after one season for chronic lateness and causing other difficulties. She continued to make some appearances on the original Cosby Show through 1991. After Cosby, Bonet had just one good movie role (in 2000’s High Fidelity) and very little else–mostly straight-to-video movies and some TV guest shots.

In 1988, Bonet had a child with Kravitz, a daughter they named Zoe. (Now grown up, Zoe Kravitz is much in demand as a fashion model.) The Bonet/Kravitz marriage floundered even as Lenny Kravitz hit his stride as a rock musician, gaining great popularity in the early ’90s. In 1993, the couple divorced.

In 1992, Bonet legally changed her name to Lilakoi Moon, but continues to use Lisa Bonet as her professional name. The name change was reportedly prompted by Bonet being into a hodgepodge of new-age beliefs.

In 2001, citing stress and other problems, Lisa turned custody of Zoe over to Lenny Kravitz. Bonet’s emotional stability seems to have improved since she met actor Jason Momoa (Stargate Atlantis) around 2006. (He is of Caucasian/Hawaiian background). She had a child with him in 2007 and they are currently expecting their second child.

The Secret Life of Sophie Okonedo

I profiled British actress Sophie Okonedo in a prior column. Okonedo, who was raised by her (white) English Jewish mother, has a black Nigerian father.

Her parents split up when she was very young. Her father returned to Africa and she had very little contact with him after he left Britain. (In this respect, her life somewhat parallels Senator Obama’s). Okonedo identifies as Jewish.

Okonedo’s new film, The Secret Life of Bees, opens Friday, Oct. 17. Based on a bestselling novel of the same name, it is set in South Carolina in 1964. Dakota Fanning plays Lily, a 14-year-old white girl who seeks refuge from an abusive father at the home of a trio of bee-keeping black sisters, the Boatwrights. Okonedo plays one of the sisters, May Boatwright. The other two sisters are played by Queen Latifah and Alicia Keys.

Rachel Getting Married and Jenny Lumet

Rachel Getting Married was released on Oct. 3 in New York, but the film opens in most cities sometime this month. Reviews so far have mostly been good. All seem to agree that Anne Hathaway, who plays Kym, the title character’s sister, has given a terrific, almost certainly Oscar-nominated performance.

Rachel (Rosemary De Witt) and Kym are members of a secular Jewish Connecticut family that is quite dysfunctional. But they come together for Rachel’s nuptials. Jewish actress Debbie Winger, 53, plays Abby, the sisters’ emotionally fragile mother. Rachel is getting married to an African-American man and the sisters’ white Jewish father is re-married to an African-American woman–but race is not an issue in the film.

Sidney Lumet had one other child with Gail Jones, sound editor Amy Lumet, Jenny’s sister. Although Sidney Lumet has been married four times, including to Gloria Vanderbilt, the mother of CNN’s Anderson Cooper, he only had children with Jones. Lumet’s most famous films include Twelve Angry Men, Dog Day Afternoon and Serpico. Last year he had a modest hit with Before the Devil Knows You’re Dead. Amazingly vigorous, he is now making another film.

Lena Horne, now 91, is the widow of Jewish film conductor and arranger Lenny Hayton, an MGM top gun in his own heyday. However, Gail Buckley is Horne’s daughter with her first, black husband.

A recent Los Angeles Times profile gives a good sense of Jenny Lumet’s personality and life history. In the piece, Lumet notes that when her grandmother, Lena Horne, married Lenny Hayton in 1947, they had to leave California for a time because interracial marriages were then illegal in the state, and even when her parents married, they raised some eyebrows. Lumet contrasts this with Rachel Getting Married where she deliberately did not have the film’s characters even comment on the interracial aspect of Rachel’s marriage. In some sense, the film is post-racial in its attitude.

I don’t believe that Jenny Lumet was raised in any religion. However, as she notes, her current husband, Alex Weinstein, is a “nice Jewish boy” and she has a new baby with him.

In August 2007, I profiled interfaith actress Gwyneth Paltrow and I said that she was about to start filming a series about Spanish cooking with famous Italian-American chef Mario Batali (whose wife is Jewish). The series is now being aired on PBS. Entitled Spain, On the Road Again, it combines Spanish cooking highlights with a lot of Spanish travel footage. It began on Sept. 20 and there are 13 weekly episodes.