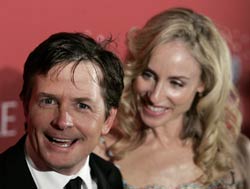 Michael J. Fox attends a Reform synagogue in Manhattan with his Jewish wife, Tracy Pollan. He was recently recognized by the Union for Reform Judaism for his tireless work on behalf of Parkinson’s Disease research and stem cell research. REUTERS/Lucas Jackson

At the Union for Reform Judaism’s biennial convention last month, actor Michael J. Fox, 47, was the co-winner of the Maurice N. Eisendrath Bearer of Light Award. Fox’s body shook from Parkinson’s disease as he accepted the award on Dec. 14 in San Diego.

The former star of TV’s “Family Ties” and “Spin City” has been tireless in his work for Parkinson’s disease research and has been a strong advocate for stem cell research. The Michael J. Fox Foundation, which the actor started, has raised and spent over $50 million for Parkinson’s research in the last three years. His work was praised by Union President Rabbi Eric Yoffie as “in keeping with the highest ideals of Judaism.”

Fox told the Union convention that he was helping his twin daughters with their Torah homework when they came across a passage about David’s fight with Goliath. Other Israelites wanted to give David a sword and armor for the fight, but David refused. Fox, making an analogy to misinformation about stem cell research, said, “I think David understood something fundamental about the deepest ideals of repairing the world. The armor, the weapons, the swords, they’re just distraction–and distraction is not what wins the battle. You just need the truth.”

So far as I know, Fox, who was not born Jewish, has not converted to Judaism (although that is possible). He belongs to a Reform synagogue in Manhattan, which he attends with his Jewish wife, actress Tracy Pollan, 47, and their four children (They have an 18-year-old son, twin 12-year-old daughters, and another 6-year-old daughter).

Pollan and Fox have a marriage that confounds the stereotype of Hollywood marriages as shallow and short-term. The couple met when Pollan, a teen actress, played Fox’s girlfriend in several episodes of “Family Ties.” They met again on a movie set a few years after “Family Ties” ended. A real-life romance ensued, and they married in 1988. In his autobiography, Fox credits Pollan as being amazingly steadfast as he conquered a problem with alcohol and as battled Parkinson’s disease.

An acquaintance of mine happened to be present at the synagogue that Fox belongs to when the Foxes’ son was bar mitzvah. He was seated not far from Fox and Pollan. After the ceremony was over, he overheard Michael say to some well-wishers, “This is the proudest day of my life.”

PBS is running a three-part, six-hour documentary on the history of the American Jewish community titled “The Jewish Americans.” According to various reviewers, the documentary is intelligent and worth watching even if the content is most interesting to those not already that familiar with American Jewish history. The documentary’s flaws include giving short shrift to many important American Jewish figures and barely touching on some important issues, like intermarriage. (It airs on PBS on Wednesday, Jan. 9, and on the following two Wednesdays–the 16 and 23. But check local listings for the dates and times in your area.)

By the way, in my column item on Schreiber the photo caption described his father as of German ancestry. Well, a friend was kind enough to recently refer me to this article in which Schreiber himself lays out his melting pot background: his mother is of Ukrainian-Polish-German Jewish ancestry and his father is of (non-Jewish) Swiss, Austrian, Irish and Scottish ancestry.

Based on ethnic background alone, Schreiber would be a good choice to narrate a documentary on the history of European immigration to America. 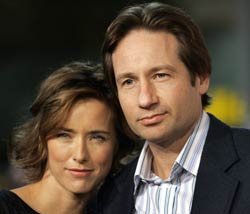 David Duchovny is the son of a Jewish father and a Lutheran mother and is married to Tea Leoni, a Christian. He’s up for a Golden Globes nomination for his work on “Californication.” REUTERS/Mario Anzuoni

Golden Globes May Not Glitter

The Golden Globe awards, given by the Hollywood Foreign Press Association, are seen as a reasonable predictor of the Oscars. In recent years the awards ceremony has proven to be more fun than the Oscars. The Globes are currently scheduled to be on NBC on Sunday, Jan. 13, at 8 p.m. Globes are also awarded for TV work.

However, the awards may be cancelled or given in a private ceremony if the writers stick to their promise to picket the ceremony. Most stars have been honoring the Writers’ Guild picket lines, including Steven Spielberg, who is scheduled to be awarded a special Globe.

The Jewish nominees in the acting categories include Kyra Sedgwick (“The Closer”) and Patricia Arquette (“Medium”) who go head-to-head for the best actress in a TV drama Globe. (Both actresses are Jewish on their mother’s side). Debra Messing (“The Starter Wife”) is nominated for best actress in an original TV movie while English Jewish actor Jason Isaacs (“The State Within”) is up for best actor in an original TV movie.

David Duchovny vies for a Globe in the best actor in a comedy TV series (“Californication” on Showtime). Again this year, William Shatner (“Boston Legal”) and Jeremy Piven (“Entourage”) compete for the Globe for best supporting actor in a comedy series.

Duchovny, 47, grew up in Manhattan, the son of a Jewish father, the late Amram Duchovny. Amran was a novelist who also worked as a publicist for the American Jewish Committee. I gather that writing novels that sold modestly couldn’t feed a family in Manhattan so Amram took the publicist job for the income.

David’s mother, Margaret, is a Lutheran immigrant from Scotland and was a high school teacher/administrator.

A smart guy, David received scholarships from his elite private high school and from Princeton University, where he earned his undergraduate degree. He was working on a doctorate in English at Yale when he stumbled into an acting career. His breakthrough role was as the star of the hit TV series, “The X-Files.”

My sense from interviews with Duchovny is that he is quite culturally Jewish and even though he was raised without religion, he was prepared to go, in a religious sense, wherever his life kind of led him. He happened to meet and fall in love with Protestant actress Téa Leoni, so he married in a church. He almost certainly would have had no problem marrying a Jewish woman in a synagogue.

Duchovny stars in the interesting little indie movie The TV Set, recently out on DVD. It was directed and written by Jake Kasdan, who is Jewish. It is much different from Kasdan’s new movie, Walk Hard: The Dewey Cox Story, which is a broad comedy. (Kasdan co-wrote and directed Walk Hard.)

Duchovny gives a nicely underplayed performance in “The TV Set” as a Jewish TV writer/producer who sees his new project, an intelligent TV comedy with undertones of tragedy, turned into a dumbed-down network pilot.

In an early scene, Duchovny’s character is very upset when his first choice for his show’s star role is vetoed by network executives. The actor “looks Jewish” and, as a matter-of-fact, looks a lot like Duchovny. Duchovny confronts the executives about why they don’t want the actor, asking straight out: “Is he too Jewish looking?” The network bigwigs don’t respond to that question, but you know the actor’s “non-mainstream” looks figured prominently in their decision not to cast him.