Well, here’s big news that almost nobody outside Australia knows yet: one of the biggest stars in the world — Daniel Radcliffe, best known for playing Harry Potter in the Harry Potter movies — just disclosed, for the first time, that his mother is Jewish.

The English actor appeared earlier this month on “Today,” an Australian news and talk program that is very similar to the American show of the same name.

British actor Daniel Radcliffe, who plays Harry Potter in hugely successful movies based on J.K. Rowling’s books, told an Australian morning show that his “mum was of Jewish blood.”

The Australian “Today” show interviewer said to Radcliffe, “You spend so much time as Harry Potter wrestling with the dark side. Are you a religious person?”

Daniel replied: “No, um, I’m not at all. I’ve grown up [pauses] my mum was of Jewish blood and my dad was a Protestant, so I grew up in a very [pauses] I am very interested in religion as something to study, but I am not a religious person in the slightest.”

The interview, which runs about five minutes, can be seen on Youtube.

Despite his use of the past tense when referring to his parents, Radcliffe’s parents are very much alive. He is an only child. His father, Alan Radcliffe, is a literary agent. His mother, Marcia Gresham, is a casting agent.

It sounds a bit strange to American ears to hear Radcliffe describe his mother as being of Jewish “blood.” However, it is not that unusual a way to say that somebody is Jewish in Britain. It is still fairly common there to describe someone of being of English, Irish, Welsh, Jewish, etc, “blood.”

I should add that it may be a long time until we hear anything more from Daniel about his Jewish background. British actors rarely talk about their religious/ethnic background and the British media rarely asks them about it.

A Busy December for Jack Black

Comedian/actor/musician Jack Black, 37, who is currently co-starring in the romantic comedy, The Holiday, got married last March to musician and artist Tanya Haden, 35. Tanya gave birth to their son last June.

As Black recently told radio reporter Bill McCleary, it is going to be a busy holiday period for him and his wife:

We have four families because my mom and [my wife’s] mom celebrate Hanukkah with their new husbands. My dad and her dad celebrate Christmas with their new wives. So we’ve got four different families to hit. I figure that’s four days of Hanu-Christmas-kah.

I’ll “translate” Black’s statement based on what I know about his background. The actor’s mother is Jewish and his father converted to Judaism after marrying his mother. Jack was raised Jewish, went to Hebrew school, and was a bar mitzvah — but confesses to not doing much in a Jewish religious sense since his Bar Mitzvah — except celebrating a few Jewish holidays.

Jack said in another interview that his father didn’t practice any faith since his parents divorced. I gather, from Black’s comment above, that Jack’s father recently re-married a woman who he now celebrates Christmas with.

Tanya Haden’s mother is Jewish and her father, famous jazz musician Charlie Haden, is not Jewish. Tanya’s sister, musician Petra Haden, formerly of the rock band That Dog, said in an interview that she and her sisters were not raised in any faith. (Tanya is one of a set of triplets, along with Petra — and musician Rachel Haden).

I surmise, from the quote above, that Tanya’s parents are now divorced and that her mother re-married a Jewish guy and that Charlie Haden re-married a woman from another faith. Whew!

So, Jack Black not only “married into” a set of triplet sisters, but he now has four different families — two that celebrate Hanukkah-while the other two celebrate Christmas. 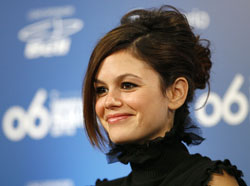 Rachel Bilson (best known for her role as Summer on the show “The O.C.”) has a Jewish father and non-Jewish mother — although little is known about her religious beliefs. Photo by REUTERS/Mario Anzuoni (CANADA)

The Fox TV series, “The O.C.,” now in its fourth season, centers on an interfaith family. The father, Sandy Cohen (played by Irish Catholic actor Peter Gallagher), is supposed to be Jewish. The mother, Kirsten Cohen (Kelly Rowan) is supposed to be Protestant.

“The O.C.” was created by and is mostly written by Josh Schwartz, a young Jewish guy. It is one of the few T.V. series to frequently address interfaith issues, most notably, in its annual Chrismukkah episode.

This year’s Chrismukkah episode aired Dec. 14, but don’t worry — you can catch the re-run. However, the sad news is that the “O.C.” appears to be running out of gas — a lot of people say the scripts have gone downhill — and this might be the last Chrismukka” celebration.

Fox, which is struggling across-the-board this season, is trying to goose the show’s flagging ratings. It remains to be seen whether they will have any success.

Bilson plays the steamy Summer Roberts, a non-Jewish sexpot who got a social conscience in the last season or so. The characters of Summer Roberts and Seth Cohen have been dating for the last two seasons.

Adam Brody’s real-life parents are Jewish, although not religious. Bilson’s real-life father, director Danny Bilson, is Jewish, and the Bilsons have worked in Hollywood for four generations. Rachel’s mother is not Jewish. (Other than a newspaper report about Rachel attending a Hollywood Passover seder, not much is known about her religious beliefs, if any.)

Brody and Bilson had been dating — for real — for the last three years and in November there were even credible reports that they had been engaged. But, they broke up, apparently for good, early in December.

I don’t suppose Adam and Rachel will be giving interviews anytime soon about what its like to break-up in real life while pretending to still be together on-screen.