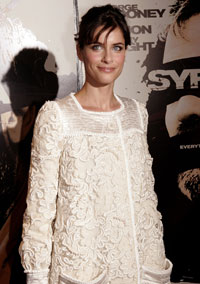 Amanda Peet, one of the stars of “Studio 60 on the Sunset Strip,” was born to a Quaker father and a Jewish mother and went to the Friends Seminary in Manhattan, which is also where she got married last year. Photo by REUTERS/Brendan McDermid

In early September 2006, Amanda Peet, the beautiful actress who stars on NBC’s “Studio 60 on the Sunset Strip,” announced she was pregnant. Two months later, her character on the show, Jordan McDeere, did the same.

But that’s where the similarities end. On the show, McDeere got pregnant after a one-night stand that happened shortly after she was named president of the fictional TV network that shows “Studio 60.” In real life, Peet, 35, is pregnant with the child of her new husband, David Benioff.

Peet was born in Manhattan to a Quaker father and a Jewish mother. She describes her upbringing as a “little bit Jewish” and a “little bit Quaker.” She went to the Friends Seminary in Manhattan, a Quaker-affiliated prep school that is almost non-denominational and whose student body is about 50% Jewish.

Peet has been acting since college, but first attracted substantial notice in 1999 as the co-star of the “Jack and Jill” TV series. Her first hit movie was The Whole Nine Yards, which co-starred Matthew Perry. Since then she has appeared in a string of movies including Syriana, Saving Silverman and Something’s Gotta Give.

Benioff, 36, grew up in Manhattan in an affluent Jewish family. His father was once head of Goldman Sachs, the famous investment firm. Benioff got an Ivy League college degree, but chose to live a very “un-Ivy-like” life after graduation–he worked as a club bouncer for a time and then taught high school in Wyoming.

Benioff was celebrating Passover with his family when he got the news that his first novel, The 25th Hour, had been accepted for publication. Subsequently, Benioff became a full-time screenwriter and novelist. His screenplays include his adaptation of The 25th Hour for Spike Lee and his script for Troy, starring Brad Pitt.

On October 1, 2006, Benioff and Peet married. It was the first marriage for both members of this very good looking couple. (Yes, that means the pair was engaged when Peet got pregnant.)

Peet managed to acknowledge both sides of her heritage at her wedding. The traditional Jewish wedding ceremony was held at Peet’s alma mater, the Friends Seminary.

Like Amanda Peet, actor Liev Schreiber, 39, is a graduate of the Friends Seminary in Manhattan. While not a superstar, Schreiber has carved out a very good career as a Shakespearean actor, as a film actor in such hits as Scream and The Manchurian Candidate, and on Broadway–where he won a 2005 Tony for best actor in a revival of “Glengarry Glen Ross.”

This is a busy month for Schreiber–his new film, The Painted Veil, opens “wide,” and he joins the cast of “CSI,” the hit TV series.

Liev Schreiber, the son of a German father and Jewish mother, is shown at the premiere of his movie, The Painted Veil, on Dec. 13, 2006, in Hollywood.

Schreiber’s first episode as a recurring member of the C.S.I. team is scheduled to air on CBS on Sunday, January 14. His character, Michael Keppler, has a fairly Jewish name, but I don’t know if the character is supposed to be Jewish.

While most people assume that Schreiber is Jewish because of his last name, his father, actor Tell Schreiber, is not Jewish. His mother, artist, Heather Milgram, is Jewish and Liev identifies as Jewish himself.

This is not the only disagreement his parents have had. They split up when Liev was only 4 years old and his mother moved to New York with Liev. Her move to New York was quickly followed by a nasty custody fight which Liev’s mother won with the financial help of Alex Milgram, Liev’s maternal grandfather.

He [my maternal grandfather] came to this country when he was a young man, before 1920, before the [Second World] War. He was a butcher, and when my mother and father split up there was a very difficult custody battle. My grandfather spent his life savings to help my mother win custody.

Milgram was an old-fashioned, Reform, socialist Jew and his mother, Schreiber says, was a hippie. “She believed in all that deep stuff and that money wasn’t cool and that you should live off the land. And when you live in New York, living off the land means driving a taxi,” he told The Jewish Week. Which his mother did.

Mother and son at times lived in flats that didn’t have electricity or hot water, but they always had books.

And while Schreiber was not bar mitzvahed, he remembers going to Grandpa Alex every year for a seder. Another memory Schreiber conjures: a visit to the Lubavitch community in Brooklyn, where Alex had a friend.

“He [Alex] pretty much raised me as if he was my father, and in many respects he was my dad,” he told The Jewish Week.

In 2005, Schreiber made his directorial debut with his film version of Jonathan Safran Foer’s novel, Everything is Illuminated. Everything is about a young American Jewish man who travels to the Ukraine to find to find the woman who may have saved his Jewish grandfather when his grandfather’s small Ukrainian town was destroyed by the Nazis during the Holocaust. (Schreiber says that the film was made in tribute to Alex Milgram, who was of Ukrainian Jewish background.)

The Painted Veil, co-starring Naomi Watts and Edward Norton, tells the tale of a 1920s British society woman (Watts) who reluctantly marries a shy scientist (Norton). He then takes a post in Shanghai where Watts meets and has an affair with a married charmer (Schreiber).

In real life, Schreiber, who has never been married, has been keeping steady company with Naomi Watts (who isn’t Jewish) for the last two years. However, they both refuse to confirm or deny a steady stream of gossip items that have them alternately engaged or broken up.

As noted in my previous column–British actor Daniel Radcliffe, best known for playing Harry Potter in the blockbuster movie series, told Australian TV last month that his mother is Jewish.

On December 22, the London Jewish Chronicle reported the same news as I did and added a few details:

Radcliffe’s mother is Marcia Gresham, a casting director, raised in Westcliff-on-Sea, Essex. The JC [Jewish Chronicle] spotted artistic talent in the family way back: the 11-year-old Marcia was featured in our pages in 1968 after winning 10 trophies and several medals for ballet dancing.

Ms. Gresham’s mother, Patricia Jacobson, told the JC she was “a real Jewish grandmother” when it came to Daniel. She said: “I was proud of him before he was Harry Potter, because he’s just lovely.”

Last year, fans devoted entire sessions at a university conference to discussing whether the fictional Potter was, in fact, Jewish. If only they had known the truth about Daniel Radcliffe.

And here’s a story about Sacha Baron Cohen, the British comic actor who is now internationally famous as the star of Borat: Cultural Learnings of America for Make Benefit Glorious Nation of Kazakhstan.

Cohen, an Orthodox Jew, has long been engaged to the charming and pretty Australian actress Isla Fisher (“The Wedding Crashers”). She has been studying to convert to Judaism and, according to some recent reports, has completed her conversion studies.

Website TMZ.com says that Fisher was recently spotted at a trendy Los Angeles store buying her sweetie a swimsuit identical to the one the new James Bond, Daniel Craig, wore in Casino Royale. It’s a vast improvement over the swimwear Cohen wore when he played “Borat.”