Interfaith Celebrities: Five Beautiful Women, A Violinist and One Caveman

The Most Beautiful People in the World? 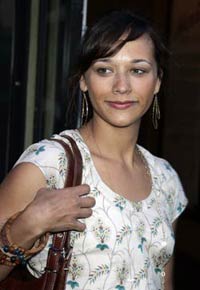 Rashida Jones, who is gaining fame as Karen on NBC’s “The Office,” is the daughter of musical legend Quincy Jones and Jewish actress Peggy Lipton of “Mod Squad” fame. To no one’s surprise, People magazine named her one of the 100 Most Beautiful People in the World. REUTERS/Fred Prouser

People magazine recently came out with their annual “100 Most Beautiful People in the World” issue. Five of the persons judged the most beautiful were actresses with interfaith backgrounds:  Rashida Jones, and Zoe Kravitz.

I am not sure what to make of this without going off into all sorts of sociological tangents. Two fairly simple points come to mind. First, there are a lot more persons of mixed Jewish and non-Jewish ancestry around today than 25 years ago. Therefore, there are more interfaith actresses. Also, I think that these five actresses demonstrate that American film/TV standards of beauty are a lot more wide-open than they were a generation or so ago when casting directors obviously favored actresses of clear Northern European ancestry, those with what was considered the “All-American look.”

Johansson, whose American mother is of Eastern European Jewish ancestry and whose father is a Danish non-Jew, has the blonde bombshell look that long has been a casting director and American public favorite. Her features would have been more than acceptable a generation or more ago… and they still are quite acceptable.

However, Bilson, whose father is Jewish, and whose mother is Italian Catholic, has a smoky Mediterranean look. Bynes, whose mother is Jewish, looks sort of generic American, but not “glamour girl” blonde. Rashida Jones looks vaguely Mediterranean, but her beauty is an amalgam of her handsome non-Jewish black father, famous musician Quincy Jones, and her beautiful Jewish mother, actress Peggy Lipton of “Mod Squad” TV fame. Lipton was as willowy a WASP-looking blonde as you can find and that look served her well in the ’60s. Rashida Jones is now co-starring on “The Office,” the TV series.

Zoe Kravitz, who at 18 is just beginning an acting/modeling career, has the most exotic ethnic/religious background of all, although her looks are decidedly African-American. Her father, musician Lenny Kravitz, is the son of a white, Jewish father and a black, non-Jewish woman (the late actress Roxie Roker). Zoe’s mother, actress Lisa Bonet, of “Cosby Show” fame, is the daughter of a white Jewish mother and a black, non-Jewish father.

Obviously, one can also use these actresses to demonstrate that the “look” of the Jewish community, broadly defined, is changing. While these five actresses vary quite a bit in their exposure to Judaism, as far as I know none of them adheres to a faith other than Judaism. Therefore, most demographers would count them as “Jewish.”

Whether a casting director would ever give them a Jewish part is another question entirely. I strongly suspect that most casting directors are still casting Jewish roles based on a vaguely “Semitic” look and have not caught up with the changing face of “Jewish beauty.”

Joshua Bell, 39, has long been acclaimed as one of the best and most exciting violinists in the world. Early last month, Bell was given the $75,000 Avery Fisher Prize, presented by the family of the late Avery Fisher, the Jewish founder of the famous Fisher Stereo company and a great patron of the arts. (The philharmonic concert hall at Lincoln Center in New York is named after Fisher, who paid for its complete restoration.)

This is not the first time Bell received an Avery Fisher award. When he was a teenager in Indiana, he got a call from Avery Fisher himself, telling Bell that he had won an Avery Fisher Career Grant. These grants help young American classical musicians start a career.

Actress Glenn Close said as she presented the prize to Bell at Lincoln Center, ”One of Joshua’s great gifts is that although he may be performing in a huge auditorium packed with hundreds or even thousands of people, each member of that audience feels as if they were the only person in the room. It’s a complex, thrilling deeply personal communication that can leave us permanently rearranged.”

Bell is the son of a non-Jewish father and a Jewish mother. While he was raised without religion, he has made it clear in a number of interviews that he considers himself “culturally Jewish.” In his acceptance speech, he recalled his family’s musical connections: his mother Shirley and his aunt Esther playing four-hand piano and his uncle Yitz, a clarinet player.

Bell was choked up with emotion as he said, referring to the Avery Fisher Prize, “This is my Bar Mitzvah. I never had a Bar Mitzvah.”

Captain Caveman and the Connie Corleone

Last November, TBS premiered the original sit-com “Ten Items or Less.” The five-episode series was a hit with critics and audiences and will be back this summer.

“Ten Items” stars comedian John Lehr, 40, as a bumbler who takes over his family’s supermarket after his father’s death. His management style makes for a chaotically comic workplace. Lehr also co-writes “Ten Items.”

In 2003, Lehr told the Jewish Journal of Greater Los Angeles about his unusual path to Judaism. He described himself as an alcoholic from a “hillybilly Kansas white-trash family.” He became sober in 1996 and began a comedy stand-up career. However, he still battled demons which led his Jewish girlfriend, now his wife, to put him in touch with her rabbi. The rabbi suggested Judaism classes, including Jewish meditation courses. The meditation classes gave Lehr some emotional peace and he converted to Judaism in 2000.

Lehr added that he needed to be circumcised to complete his conversion. Well, he had the procedure in Hollywood and, sure enough, his mohel asked Lehr whether he had read the mohel’s son’s movie script–while Lehr’s pants were still around his ankles! Fortunately, the newly minted Jew saw the humor in the situation.

Lehr also stars as one of the cavemen in the very popular Geico auto insurance ads. The ads are such a hit that ABC just commissioned a pilot for a TV series starring the cavemen. However, Lehr is committed to “Ten Items” and will not be in the pilot. (The creator of the Geico ads says they give Lehr free rein to improvise as they shoot his Geico ads because what he comes up with is usually funnier than the script).

Like most modern humans, I find it difficult to tell which actor is playing a particular caveman. However, I am sure that it is Lehr in the ads in which the caveman is talking to his therapist.

The therapist, by the way, is played by actress Talia Shire, best known for playing Sylvester Stallone’s wife in the “Rocky” movies. She was born Talia Coppolla and is the sister of famous director Francis Coppola. The Coppolas are an Italian Catholic family.

In one interview, Jason Schwartzman indicated that he was raised without religion, but did add that he loved matzo ball soup.