Interfaith Celebrities: Dancing with the Stars of David 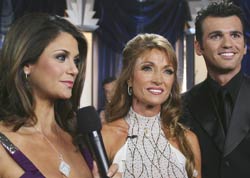 Actress Jane Seymour (C) was one of the stars of Dancing with the Stars. The child of an interfaith family, she is pictured with co-host Samantha Harris (L, also Jewish) and Seymour’s dance partner, Tony Dolovani. ABC/Carol Kaelson

Dancing with the Stars, the ABC show in which celebrities dance with professional dancers, is a certified mega-hit, drawing huge ratings. This year’s season just ended and, with the help of a friend, I was able to ferret out some interfaith connections.

Cuban, despite his odd last name, is Jewish. Seymour, who was born Joyce Frankenberg, is the daughter of an English Jewish doctor and his wife, a non-Jewish Dutch nurse. While not raised in any faith, Seymour has talked about her Jewish side fairly often and gave one of the best performances of her career as an American Jewish woman trapped in Europe during the Holocaust in the 1988 mini-series, War and Remembrance. 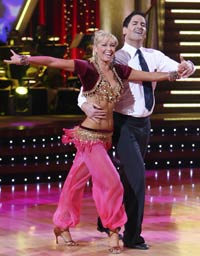 Russia has a great dance tradition and so it is no surprise that quite a number of the pro dancers on the show are Russian-born immigrants. But it took me quite some time to find out if any of these Russians were Jewish or part Jewish. I now am sure about two.

One is all-around hunky guy Alec Mazo, who was paired with the winner of the show’s first season. Both his parents are Jewish.

Mazo, a U.C. Berkeley graduate, runs a dance studio in San Francisco. This year, sadly, he and his celebrity partner, a fashion model, were eliminated in the first round.

Pro dancer Maksim Chmerkovskiy, 27, another good-looking guy from the former Soviet Union, was paired this season with ex-Spice Girl Melanie Brown and the couple finished second.

Chmerkovskiy expressed a wish to visit Israel to explore his heritage and told a fan via his website, “My mother is Christian and my father is Jewish (we are a confused family), so my brother and I got the best of both worlds. However, we live a life closer to that of a Jewish family.”

Also Jewish among the cast are co-host Samantha Harris and Len Goodman, the old English judge. 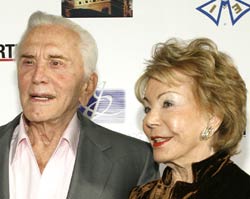 Kirk Douglas’ wife Anne (R) converted to Judaism three years ago, but none of his four children were raised Jewish. REUTERS/Mario Anzuoni

Screen legend Kirk Douglas, who turned 91 this past Sunday, came out with his ninth book last summer, Let’s Face It, 90 Years of Living, Loving, and Learning.

Douglas’ embrace of his Jewish faith has been well-chronicled in several of his books. In short, while he never hid he was Jewish, for most of his adult life he did not practice Judaism except for attending services on Yom Kippur. After a helicopter crash in 1991, he became religious and now studies weekly with a leading Los Angeles rabbi. He has also supported, with his time and his money, many Jewish-related causes, like building playgrounds for Jewish and Arab children in Israel.

But Douglas regrets the many decades when he barely acknowledged his Jewish identity, writing in his new book, “I feel guilty for abandoning Issur Danielovitch”–his birth name.

In Let’s Face It, Douglas says that he only cares that his children do good in the world, not what religion they do or do not follow. However, in a poignant recent interview with the Forward, he was more candid. He blamed himself for not giving his sons a Jewish education that would have set them on the path of embracing Judaism. (None of his children were raised in any faith).

Neither of Kirk’s wives was Jewish when he married her. However, Buydens converted to Judaism three years ago. Her conversion was something of a gift to Douglas on the occasion of their 50th wedding anniversary.

While his sons are very respectful of Kirk’s embrace of his Jewish heritage and have, as he says, showered him with gift menorahs, none of them have followed in his religious path save for Eric. He was bar mitzvahed while in drug rehab.

The surprise in the Forward article was the news that Peter’s 14-year-old daughter, Kelsey, decided on her own that she wanted to have a bat mitzvah. Kirk told the Forward that he was skeptical of her motives–perhaps she only wanted a big party. However, he was pleasantly surprised when Kelsey studied hard to learn her Torah portion in advance of her bat mitzvah. Now, the article goes on to say, Kelsey’s 11-year-old brother, Tyler, is talking about having a bar mitzvah.

Scenes from a Chinese Restaurant

San Francisco is a city noted for its innovative ideas. So, it’s appropriate that San Francisco gave birth to “Kung Pao Kosher Comedy,” a truly wonderful way to avoid the Christmas blues while getting your fill of Chinese food. Let me explain.

In 1993, Jewish comedian Lisa Geduldig thought she was booked to play a club not far from Boston. Turns out it was a Chinese restaurant with the word “club” in its name. She ended up telling some Jewish jokes to Chinese restaurant goers. From that came the germ, or the egg drop, of an idea.

For more than a decade, now, Geduldig has booked a whole San Francisco Chinese restaurant for “Kung Pao.” Shows are presented on the three evenings just before Christmas Day, and on the evening of Christmas Day. Lisa presents two shows a night, one with a full meal and one a cocktail show with veggie egg rolls.

Geduldig usually has four Jewish comics, including herself, entertain the crowd with mostly Jewish oriented humor. She is a tough booker and the acts are genuinely funny. The show has become an institution in San Francisco, with 3,000 people going each year. A substantial proportion of the proceeds go to charity.

The event began as a community service for Jews who have been stuck on Christmas with nothing to do but hide under the covers or go to a Chinese restaurant. The audience has expanded to include Chinese-Jewish couples, interfaith ones, singles, families, gays, straights, those far from home, and generally those who not only are seeking an alternative to Christmas alienation but who also like comedy mixed with Chinese food. One of Kung Pao’s claims to fame is that Henny Youngman performed his last shows there, in 1997.

This year, the lineup includes Jewish comedian Shelly Berman, 81, who began his stand-up career a half-century ago, in 1957. Berman plays Larry David‘s father on “Curb Your Enthusiasm.”

Also on the bill are comedians Scott Blakeman and Esther Paik Goodheart, who is Korean and Jewish. She was born in Texas to Korean immigrant parents. Her father is a famous Billy Graham like Presbyterian minister. She grew up in New York in the ’60s. Her mother then worked as a portrait artist in the Catskills Jewish resorts and Goodheart got to know many of the Jewish comics who worked these hotels.

She married a Jewish man and converted to Judaism after the birth of her son. She now lives in New Jersey, where she teaches Hebrew to kids at various temples–and she also teaches English to Koreans.

Not a novelty act, she has won a number of comedy competitions and she’s opened for top comics, big name bands… and even Hillary Clinton and Henry Kissinger!

So, if you live in or plan to visit the San Francisco Bay Area, soon, check out the Kung Pao website for ticket and other info. (Some people travel thousands of miles to be at the show each year.)