The 14th season of ABC’s Dancing with the Stars started yesterday, Monday, March 19. Two celebrities of interfaith background are competing this season. 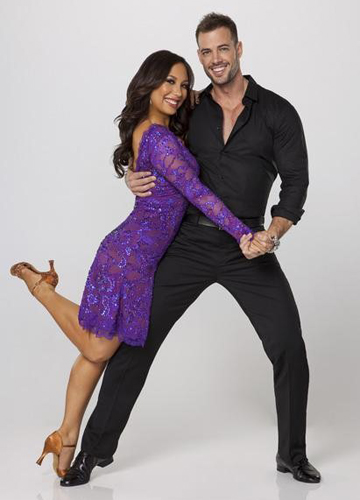 William Levy is partnered with Cheryl Burke on Dancing with the Stars.

Actor William Levy, 31, who was born in Cuba and came to the States when he was 14. While hardly known to “Anglo” audiences, he is a star of Spanish language soap operas, or “telenovas.” Levy’s audience appeal is obvious even if you don’t speak Spanish: he has a fabulous physique and quite a handsome face.

Levy had only one Jewish grandparent: his maternal grandfather. In an old interview, Levy said that his Cuban Jewish grandfather was estranged from his own family when he married a Cuban non-Jew. He also said in an interview that he was raised without religion. However, in 2009, Levy formally converted to Catholicism. (Levy’s full original name is William Levy Gutiérrez. In the “Spanish style,” he bears the last names of both his mother and father. He ultimately dropped Gutiérrez as part of his stage name.)

The other (dancing) celebrity is Melissa Gilbert, 47, of Little House on the Prairie fame.

Back in 2010, when the talk show, The Talk, was about to premiere, I wrote about actress Sara Gilbert, now 37, who created the show and co-hosted it. She remains a host of the show, which is now in its third season. 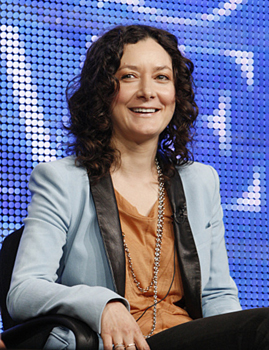 Sara Gilbert is the legal half-sister of actress Melissa Gilbert, 46, of Little House on the Prairie fame (and scores of TV movies). Melissa, whose biological parents were not Jewish, was adopted at birth by Barbara Crane Gilbert, who is Jewish, and Barbara’s then husband, actor Paul Gilbert (born Edward McMahon), who isn’t Jewish.

Barbara and Paul split-up in 1972 and Barbara went on to wed attorney Harold Abeles. Sara Gilbert, who was born (1975) Sara Abeles, is the biological daughter of Barbara and Harold. When Sara tried to break into acting, her sister Melissa was already an established name. So, for career reasons, Sara’s name was changed from Sara Abeles to Sara Gilbert.

Melissa, who played Anne Frank in a TV version of The Diary of Anne Frank, really hasn’t been a practicing Jew as an adult. However, she did opt for a Jewish wedding ceremony when she wed her second and current husband, actor Bruce Boxleitner (who isn’t Jewish), in 1985. 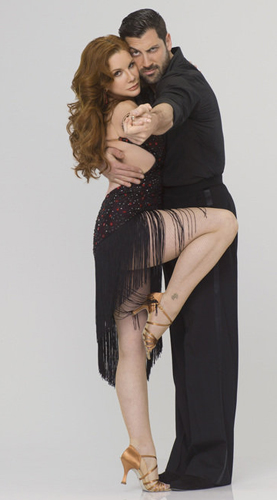 Melissa Gilbert is partnered with Maksim Chmerkovskiy on Dancing with the Stars.
Since I wrote that, I had a chance to read Melissa Gilbert’s autobiography, Prairie Tale (2009). In her memoir, Gilbert notes that her family celebrated Jewish holidays. However, she calls herself “Jew-ISH” because she had no religious training and because she discovered, as an adult, that her mother never had her formally converted to Judaism.

Gilbert writes that at one point she became interested in religion and a Jewish friend asked her about her conversion to Judaism. When confronted, her mother, Barbara, was first vague, but finally admitted she never had Melissa formally converted to Judaism during Melissa’s infancy or childhood.

To make Melissa feel better as a child, Barbara invented a story that Melissa’s biological father was a Rhodes Scholar and that her biological mother was a ballerina. Gilbert made contact with her biological father when she was an adult and found out her father was a sign painter and her mother, who died in 1980, wasn’t a ballerina. Her biological parents were married to other people when they met. They split up with their respective spouses and took children from each marriage into their joint home. When Melissa was conceived, they just couldn’t afford another child and put her up for adoption.

Her meeting with her biological father was amicable. On the down side, Gilbert discovered a history of substance abuse in both her biological parents’ families, and quite a large portion of Gilbert’s book recounts her decades-long personal battle with drug and alcohol abuse.

Her first marriage (1988-1992), to actor Bo Brinkman, the father of her older son, Dakota, floundered due to Brinkman’s infidelity and because of both parties’ substance abuse problems.

It isn’t clear what caused Gilbert to seek a divorce from actor Bruce Boxleitner in 2011. He’s the father of her younger son, Michael, who is named after the late, interfaith actor Michael Landon, star of Little House.

Despite this odd family history and her substance abuse problems, Gilbert has maintained a better career than most child stars. She has worked steadily since Little House ended, raised two kids and served as President of the Screen Actors Guild.

Editor’s Note: To read more about adoption and conversion, check out When the Interfaith Couple Considers Adoption.

Zach Braff Responds to “Me” and Cousin Mitt Romney

In my February 7, 2012 column for InterfaithFamily.com, I discussed the partial Jewish background of two men who sought the presidency: General Wesley Clark and Senator John Kerry. I also mentioned that former Vermont Governor Howard Dean has a Jewish wife and that President Barack Obama and Secretary of State Hillary Clinton have Jewish relatives.

I concluded the column item with a surprise of sorts: the fact that actor Zach Braff and Republican presidential candidate Mitt Romney were distant blood cousins. Here’s a condensed recap:
Actor Zach Braff (Scrubs, Garden State), 36, who is Jewish, and former Governor Mitt Romney, 65, a devout Mormon, seem worlds apart. Nonetheless, Braff and Romney really are very distant blood cousins. They are both direct descendants[*] of Rebecca Nurse (1621-1692), a devout Puritan Protestant woman who was falsely accused of practicing witchcraft and hanged at the infamous Salem, Massachusetts witchcraft trials. Nurse is a central character in the famous play, The Crucible, by Jewish playwright Arthur Miller.

My friend Michael, a family history expert, found interviews with Zach Braff and his brother, novelist Joshua Braff, 42, in which they both said that their mother, who was born into an old New England Protestant family, converted to Judaism before marrying their Jewish father. On a hunch, Michael looked far back into both Braff’s mother’s family tree and Romney’s family tree, and found Rebecca Nurse in both.

I also reported Braff and Romney’s “cousinhood” in a column item I wrote for some Jewish newspapers, including the New Jersey Jewish Standard (2/10/12).
Braff is originally from South Orange, a town next door to Teaneck, and apparently, a hometown friend sent Braff the actual Standard newspaper page with the column item about him and Romney.

On Febuary 29, he posted a scan of the Standard page on the social news website, Reditt, under the following title: “So I guess I am related to Mitt Romney through a witch. Family Reunions just got a little crazier.” Later he added, “Mitt Romney and I have nothing in common.” And then Braff joked, “Incidentally?buying a broom later.”

Over 1200 people posted Reditt response messages to Braff’s remarks to my Standard column item on Reditt.

My item obviously interested a wide variety of people. I knew from the start that it had all the right ingredients for a great story: irony, famous people, politics, weird family history connections, a famous playwright and witchcraft.

[*] One Reditt user comment troubled me. I wrote (for newspapers and for InterfaithFamily.com) that both Romney and Braff were “eighth generation descendants of Rebecca Nurse.”

This user said that he thought there had to be more generations between Mitt Romney, Zach Braff and Rebecca Nurse than eight, since she lived in the 1600s.

I re-checked with my family history expert friend Michael and I realized that I slightly misinterpreted what he told me.

Second: Michael says he never used the word “generation.” There are, in fact, nine ancestors — in both cases — that connect Braff and Romney to Rebecca Nurse.

Third: Michael says that I was correct in saying that Romney and Braff are blood cousins (9th cousins actually).

This is all much simpler to understand if you look at the list of ancestors for both Braff and Romney, below: