A Jewish Son-in-Law for Hillary and Bill? 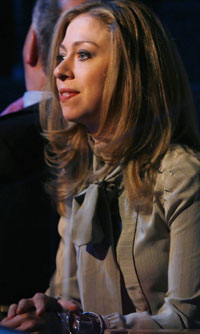 Once-and-perhaps-future first daughter Chelsea Clinton has been dating a Jewish man, Mark Mezvinsky, for at least the last two years. She recently attended a Sabbath dinner at the home of a Jewish friend to learn more about Mezvinsky’s faith. Photo by REUTERS/Chip East.

A recent New York Times profile of former “first daughter” Chelsea Clinton, 27, gave quite a bit of info about her and about her relationship with Marc Mezvinsky, her steady Jewish boyfriend of at least the last two years.

Unlike the progeny of some presidents, Chelsea has led a quiet and law-abiding life and was an outstanding college scholar. She has a graduate degree in international relations and now works for a hedge fund in New York.

Mezvinsky, 28, works for the investment bank Goldman Sachs. His Jewish parents, Marjorie Margolies-Mezivinsky and Edward M. Mezivinsky, both served in Congress. Edward represented an Iowa district back in the ’70s. Defeated for re-election, he moved to Pennsylvania where he met Marjorie. She served one term in Congress from Pennsylvania before being defeated in 1994. Sadly, Edward was a key figure in a major financial scandal and was sent to federal prison in 2001. His prison term ends next year.

The Times describes the couple as serious and friends are speculating about a White House wedding. It may be an interfaith ceremony–Chelsea is a practicing Methodist. The Times also said that Chelsea recently attended a Sabbath dinner at the home of a Jewish friend hoping to learn more about Marc’s Jewish faith.

Della and Max Rosenberg had Adeline, who was the half-sister of Hillary’s mother. Della never converted to Judaism–but Adeline did convert to Judaism and lived her life as a Jew.

In 2000, Hillary’s Jewish aunt became the subject of a bit of confusion and criticism when Hillary was running for a United States Senate seat from New York. Hillary talked about this aunt while campaigning, but it wasn’t clear in first news reports whether Hillary was saying that she, herself, had some Jewish ancestry (she doesn’t).

Either way, some critics charged that Hillary was “pandering” to the large New York Jewish vote by “suddenly” finding a Jewish aunt.

Rudy Giuliani, then the Republican mayor of New York City, was asked about Hillary’s Jewish connection. When Hillary’s exact relationship to this Jewish ‘half’ aunt was explained to Rudy, he shot back: “If that makes Hillary Jewish, then I am Jewish because my third cousin once rode with a Jewish cabdriver.”

A funny–if not quite fair comment. But New York ethnic politics are not a polite affair.

Nine from The Ten 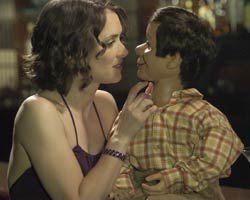 Winona Ryder (L) is one of the many Jewish actors featured in The Ten. Ryder, born Winona Horowitz, is the daughter of a Jewish father and a Buddhist mother. The dummy’s genetic roots are rumored to be fir and maple. Photo courtesy THINKFilm.

Congratulations to actor Liev Schreiber, 39, and his “steady,” actress Naomi Watts, 38, on the birth of their first child, a son, on July 26. Schreiber, who I profiled in , is the son of a non-Jewish father and a Jewish mother. He identifies as Jewish. Watts is not Jewish.

Schreiber is one of the co-stars of the indie comedy film, The Ten, which opened in New York on August 3, but does not open in many cities until August 10 or 17. The Ten is made-up of 10 modern stories loosely based on the Ten Commandments. Director/writer David Wain, who is Jewish, has a small role in the movie and he managed to attract a marvelous cast, including Jewish actors Paul Rudd, Winona Ryder, Adam Brody, Ron Silver and H. Ron Benjamin.

Wain is best known for his first movie, Wet Hot American Summer, a comedy about a summer camp, and for being part of the comedy troupe that made the cult-favorite MTV sketch show, “The State.” Other stars of “The State” include Jewish comedians Michael Ian Black and Michael Showalter–both of whom also have roles in The Ten. Showalter, 37, who starred in the interesting, if not entirely successful 2005 film comedy, The Baxter, is the son of a Jewish mother and an Episcopalian father. Like Schreiber, he identifies as Jewish.

The Ten is a small comeback vehicle for Winona Ryder, 35, who’s hardly acted since her shoplifting conviction in 2002. Ryder just told Vogue magazine that her doctor had given her too many painkillers for a broken arm not long before her arrest and that partially explains her behavior. But, she added, she long wanted to get her life more under control and the whole shoplifting affair was a good excuse to take a long rest.

I had thought this was the case. Ryder’s career just soared from 1985 until 1999. She received two Oscar nominations (for The Age of Innocence and Little Women) and almost all of her films were intelligent hits. Starting in 2000, she seemed to care less and acted in some fairly dumb movies. Moreover, she was simply punishing herself by refusing to plead guilty to the shoplifting charge and taking the case to a circus-like trial.

Ryder was born Winona Horowitz to intellectual hippie parents. Her father is of Russian Jewish ancestry and Winona has briefly talked about how some of her father’s relatives died in the Holocaust. She has referred to herself as Jewish in a few interviews, but she was raised essentially without religion and doesn’t appear to practice any faith. While Ryder has hardly talked about her mother’s background, a number of good sources virtually confirm that her mother was not born Jewish and is now a serious Buddhist. 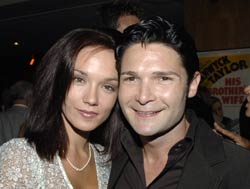 Corey Feldman (R), who is Jewish, married Susie Sprague (L), who is not, in an interfaith ceremony on the VH1 reality series “The Simple Life.” Baggy-panted rap star-cum-minister M.C. Hammer presided. Photo by REUTERS/Phil McCarten.

The oddest end of all is the new A&E cable series, “The Two Coreys,” starring former child stars Corey Feldman, 36, and Corey Haim, 35. Both are Jewish, both had troubled childhoods, and both Coreys had serious problems with drugs. Feldman, however, cleaned up his act quite a while ago. Haim is only sober fairly recently and his past includes more serious runs-in with the police than Feldman.

“The Two Coreys” is “scripted reality.” In other words they are playing fictional versions of themselves and we have to figure out what might be real.

Feldman and Haim starred in three films together in the late ’80s, including the cult hit The Lost Boys. They were billed then as the “two Coreys” and that stale fame is enough to get them a reality show on cable TV.

Previously, Feldman appeared as himself on the first season (2002) of the cable semi-reality series, “The Simple Life.” In the last episode of that series, Feldman married his present wife, Susie Sprague, in an interfaith ceremony presided over by former rap star and ordained minister M.C. Hammer. Some Jewish traditions were mixed into the ceremony. Sprague is constantly seen on-camera in the “Two Coreys” and the Feldmans now have a son, whom they named Zen Scott Feldman.

In 20 years we will probably have reality shows featuring the children of reality shows stars who were messed up by being forced to appear on their parent’s reality shows. We might even have a show called “The Two Zens.”