Interfaith Celebrities: a Former Geek, the Equestrian Author, and an Aboriginal Jewish Doctor

Another Multi-Talented “Geek”: The Daley Update

Opening on Friday, July 8th is the black comedy Horrible Bosses. Jason Bateman, Jason Sudeikis and Charlie Day play three buddies who would like to get

rid of their terrible bosses played by Kevin Spacey, Colin Farrell and Jennifer Aniston. They cannot quit their jobs so, after drinking too much, they seek advice from a hustling ex-con played by Jamie Foxx.

Together, the quartet devises a complex, but seemingly fool-proof plan to get rid of the bosses “permanently” (as in deceased), but things don’t quite go as planned.

The script was co-written by interfaith actor John Francis Daley, 25, who is now best known for his co-starring role as psychologist “Lance Sweets” on the hit Fox TV series, Bones. Daley has written some short films, but Bosses is the first feature he has penned. He says, “When I’m not acting, I’m writing screenplays.” He says he also likes to play music with his rock band Dayplayer.

Daley’s Irish-American Catholic father, R.F. Daley, is mostly a stage actor. However, he has

guest-starred on a number of TV shows. Twice he has acted opposite his son: once in an episode of Boston Public and again in a recent episode of Bones.

The younger Daley’s mother, Nancy Daley, a piano teacher, is Jewish. Years ago, I caught what I would call a “shaky” reference to John Francis Daley being raised Jewish. I am not sure whether that reference was accurate. In any event, it is my strong sense that Daley is secular now.

Daley referred to his background in an April, 2011 interview with Entertainment Weekly (EW) in which he discussed the Bones episode scene he shared with his father:

EW: How was filming that scene?

Daley: It was kind of nerve-wracking. It was actually one of the most nervous moments I’ve ever had on the show, because I knew that he was probably nervous as well. So I had nerves of my own and sympathy nerves. So it was just double the nerves. But we were able to get through it, and it ended up being a really good scene.

Daley: I have sympathy nerves for everyone. I think it’s the half-Jew in me.

EW: It’s better than Catholic guilt. I have that.

Daley: I do as well! Double the shame.

Daley began as a teen actor. Before Bones, he was best known for playing the lead character, “Sam Weir,” on the teen-oriented comedy series Freaks and Geeks (1999-2000). Although the show was cancelled quickly for anemic ratings, it went on to be a cult hit and it is currently airing on two cable networks (IFC and TeenNick).

Daley is following a well-trod path. At least four Freaks and Geeks veterans have shown that they have multiple 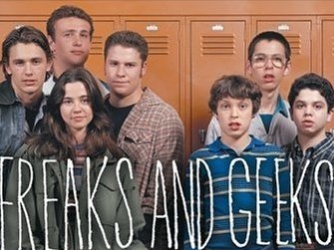 Freaks‘s Jewish co-creator Judd Apatow, 43, went on to be a famous film director/writer/producer.

Three of Daley’s Freaks and Geeks co-stars have already made their marks as actors and writers. Jewish actor Seth Rogen, 29, has co-written the scripts for a number of hit movies including Superbad and Pineapple Express.

Interfaith actor and Apatow protogé Jason Segel, 31, wrote and starred in the hit Forgetting Sarah Marshall, starred in I Love You Man and penned the script for a new “Muppets” movie that will open this November.

Interfaith actor James Franco, 33, another Freaks alum, recently had a short story collection published. He has also written a number of short films. He’s now filming a feature film biography of the late actor Sal Mineo. Franco co-wrote the bio-pic and has a supporting acting role in the film.

Ms. Bloomberg’s riding experiences are the

inspiration for a new series of young adult novels that she is writing. The first, called The A Circuit, has just been published and is now in bookstores.

She told US Weekend magazine: “There was a not a great horse book that I could think of when I was growing up, so this is something exciting to be able to do.”

Georgina Bloomberg and her sister, Emma Bloomberg, 31, are the only children of Mayor Bloomberg. Their mother is Susan Brown, 63, the mayor’s ex-wife.

Mayor Bloomberg, as most people know, is Jewish. He grew up in Massachusetts, the son of middle class parents. His late father was a bookkeeper. His mother, a homemaker and office manager, died on June 19, 2011, age 102. Well into her 90s, she served as co-president of her Boston area synagogue.

The future mayor first made his mark on Wall Street. He later became a billionaire when he founded the amazingly successful Bloomberg LP. In 1975, he married Brown who was born in Yorkshire, England.

Details about Brown’s background are surprisingly hard to find. However, I know that the couple met shortly after Brown moved to New York in 1973 and I know she is not Jewish. I also know that the Bloomberg sisters were raised in their father’s faith.

In 1993, Bloomberg and Brown amicably divorced. Many sources describe their divorce as the “gold standard” of famous couple divorces because it was accomplished with no publicity and no rancor. Brown even vocally supported her ex-husband during his first run for mayor in 2001.

In 2001, The New York Times described the reasons for their parting and their later relationship in a long profile of Michael Bloomberg:

As a married man in the 1980’s, Mr. Bloomberg would quarrel with his wife, Susan Brown, about his long stretches away from home both building his business and enjoying the after-hours social life it afforded him. He would go home in the evenings, spend an hour or two with his two daughters and then typically leave for dinner.

“They were not getting along because their lives are not compatible,” said Emma Bloomberg, 22, the elder of Mr. Bloomberg’s two daughters. “My mother doesn’t want to be social all of the time. She was perfectly happy to curl up with a book and not go out all week.”

But after their divorce in 1993, Ms. Brown moved back into his Manhattan townhouse on East 79th Street with Emma and her sister, Georgina, for the better part of a year. The two have remained the closest of friends; later Ms. Brown and her boyfriend volunteered for Mr. Bloomberg’s campaign. They still celebrate Thanksgiving and most Jewish holidays together at Mr. Bloomberg’s country home in Armonk, N.Y….Emma Bloomberg was so struck by her parents’ friendly parting that she wrote about it in her college applications.

“My parents’ divorce was one of the best things that ever happened to me,” said Ms. Bloomberg, who graduated this year from Princeton University. “It made my relationship with both of my parents stronger. My parents are best friends. Nobody understands that until they actually see it.”

Besides writing and riding, Georgina Bloomberg does a lot of charity work and donates her riding winnings to charity. She is unmarried.

Her sister, Emma, is considered the more “serious” of the two sisters. A Princeton graduate (2001) with a degree in English, she earned a Harvard degree in public administration and business in 2007 and now works for the Robin Hood Foundation, an important anti-poverty organization. In 2005, she married Chris Frissora, now 31, whom she met at Princeton. At that time, Frissora was also studying for a graduate degree in business at Harvard.

Mayor Bloomberg married the couple. The NY Daily News, which covered the event, wrote: “[Emma] Bloomberg said she and Frissora decided on a civil ceremony because they are of different faiths – she was raised Jewish, he Catholic — and because her father could do the honors.”

End Note: An Aboriginal Jewish Doctor from Down Under

Early in June, I saw a brief note on the Jewish Telegraph Agency (JTA) web site that said that a “Jewish Aboriginal” physician in Australia, Lisa Jackson Pulver, had just won the Order of Australia, one of the country’s highest prizes.

That’s about all that the news note said. I wondered if Pulver was of mixed Jewish and Aboriginal parentage. As one might put it, you don’t come across a lot of Jewish and Australian Aboriginal physicians and clearly there was much more to learn about Dr. Pulver.

After a long web search, I found a 2004 article about her in the Australian Jewish News that someone re-posted on their blog. I planned to write a longer column item about her.

But the JTA beat me to the punch. I guess a lot of people wondered about their brief note and, on June 21, the JTA published a very informative and up-to-date profile of Pulver.

Rather than ruin the surprises, I’ll just say that you should click over and read the piece. It’s pretty short and chock full of colorful and genuinely interesting details.