The first time I wrote about pregnancy, my husband and I had been trying to conceive for only a few months. My biggest worry was parenting our child while giving them a Jewish identity. I didn’t know then that my life for the next two years would focus on conceiving and not parenting.

My heart would break every month when my menstrual cycle would start again. After seven or eight months of “trying,” a couple of friends recommended we talk to a fertility specialist. Consulting with a specialist would mean admitting something was wrong.

I went through the battery of blood tests and pelvic exams. The doctor determined that I had poor ovarian quality (Medical-ese for my eggs were lousy). He suggested that I consider adoption or perhaps using donor eggs. I remember sitting in his office as he explained; I could barely hear him, he suddenly sounded muffled as I felt my dream of motherhood taken away from me.

In that instant though, I heard a voice. I don’t know if it was my sense of denial or God or some other basic instinct. It told me the doctor was wrong, to walk out and to keep trying. I walked away from that doctor not really sure of my next direction.

I went to see a second doctor, who had a different approach to treating infertility. I also started to pray. I had read that taking on a mitzvah can help tip the scales in a positive direction. So I prayed Shacharit (the morning service) every day. I asked my husband to pray as well, using his own words.

I would keep adding more mitzvot to enrich my spiritual life. I baked challah bread and took the challah portion and recited the prayer. My husband and I gave tzedakah. I sought guidance to enhance my spiritual life as much as possible. A few people had suggested I go to the mikvah.

Being married to someone not Jewish, the laws of family purity do not apply. My Orthodox rebbetzin (rabbi’s wife) explained that I could go to the mikvah, but the attendants were not allowed to help me (i.e. tell me when the immersion is kosher). She said that the mikvah attendants might also not even let me immerse at all (since most know that my husband isn’t Jewish). I decided to go to the mikvah in another city, two hours away, to avoid that problem.

I had read that the act of mitzvot could change a person spiritually. Only I didn’t feel more spiritual, not even after the mikvah. I felt more like a circus act. With each mitzvah I felt like I was telling God, “look at me! I’m being such a good Jew! Please give me a baby!” I was driving myself crazy trying to be a perfect Jewish woman.

Months went by and still no pregnancy. My husband watched my frustration grow. He could tell that my spirituality wasn’t fulfilling and he saw that my being observant was only adding to my emotional pain.

My spirituality started to unravel. I was frustrated and angry with God. One by one I started to drop mitzvot. I felt I was failing as a Jew. With Rosh Hashanah only a few days away, I decided I would attend services with a clean spiritual slate. I prayed from the machzor (the prayer book for the High Holy Days), trying to remain zen, despite the numerous babies in the shul that day. I wanted to reboot my spirituality, starting fresh with the New Year.

After the Torah reading, the rabbi started his sermon: “The story of Chanah is a story of hope, and unless you know the pain of infertility…” His voice echoed in my brain. I could feel my throat closing and my eyes filling with tears. I couldn’t hold them back. Tears fell as I looked straight ahead.

When we stood up to continue the service, I decided again I would pray for a child. This time, I would use my own words. Only I had no words left. Only “Please.” “Please God. Please, this year. Please.” It wasn’t as eloquent as Chanah’s prayer. It was the only word I had left, and it was filled with kavannah (intention).

A few weeks after Rosh Hashanah, I decided to schedule a consultation with a third fertility specialist. This time I was diagnosed with impatience. This doctor told me I was a normal 38-year-old and that I would eventually get pregnant. I wanted to believe him.

I was beside myself. It was closing on two years since we had started trying. I was hurt that God would do this to me. My husband’s faith was unwavering. He saw this as just another bump in the road.

Only a few weeks later, my doctor (who called me by my Hebrew name since he is Jewish) called with the news, “Chana you’re pregnant.”

After I heard those words, I talked to God again. This time thanking God and apologizing for my anger.

Pregnancy after miscarriage after infertility is a very difficult emotional journey. I am once again praying to God daily. Not Shacharit. I use my own words and ask for God’s help.

I don’t know if God heard my prayer that day in shul, or if it was the cumulative effect of my mitzvot, or my husband’s unwavering emunah (faithful belief) through it all. I do know that the journey needed to be travelled, and as difficult as it was, God was indeed there the entire time.

I know I am different now, than I was back in May 2009. I am trying to take my spirituality one step at a time. Rather than take on several mitzvot, I am working on one at a time. My spirituality had been completely one-sided and now I want my husband to be a part of my mitzvot.

When I think about giving my child a Jewish identity I feel more humbled. I will likely not have all the answers for my little one, but there will be time for both of us to grow together along with my husband and develop our Jewish identities as a family.

Chana-Esther Dayan lives in Ottawa, Canada, with her husband of five years. She is learning to integrate her Jewish faith in her daily living in a mixed marriage. Since there are no real rules, Hannah and her husband are learning as they go.

The Cure for My Pregnancy Anxiety 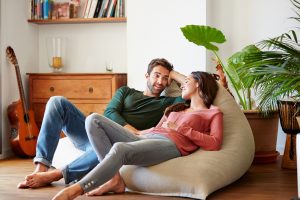