I Was the Only Jewish Kid on the Block & Worry My Kid Will Be, Too 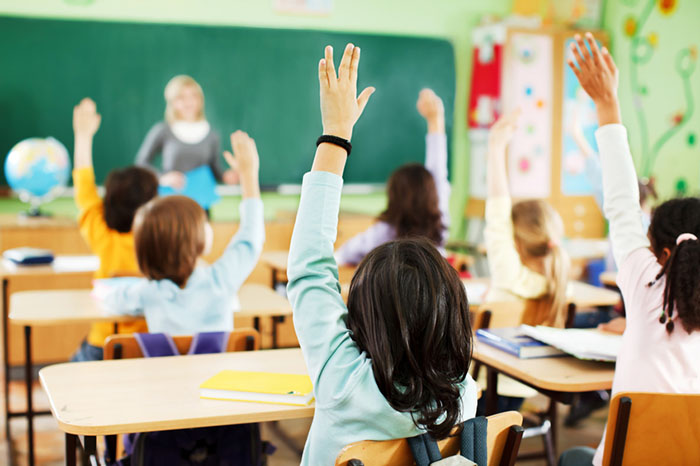 Growing up in a small, rural town in northern New Jersey in the ’80s, I never had perfect attendance in school. Not because I was sick or because my family took vacations outside the school calendar, but rather because every fall, I needed to take two days off in observance of the Jewish holidays.

Unlike my friends who grew up in one of the predominantly Jewish parts of our state—where schools are closed for the High Holidays—I was one of about six Jewish families in our entire school district. So for us, school was definitely open and the High Holidays were considered excused absences (but still counted as absences), which meant I’d never have perfect attendance.

Of course, what I share today as a sore spot of my youth seems beyond frivolous now at 36 and a married mother of two. But at the time, it really bothered me. I already knew I was “different” from the other kids.

Sometimes I really loved being unique. For example, my bat mitzvah was the first one my friends who weren’t Jewish had ever been to—it was their inaugural exposure to Judaism and, not surprisingly, it was happily met with rave reviews. After all, what’s not to love? There’s the party and the fancy dresses and the DJ and the neon necklaces and Shirley Temples.

Yet, other than the fact that I missed some school days each fall, or that I attended Hebrew School and had a bat mitzvah (whereas they all went to CCD at the same Catholic church and had confirmations), my religion remained a very personal thing for most of my childhood. It wasn’t until I was getting ready to look at colleges that I realized finding a school with a large Jewish population was going to be really important to me.

I didn’t want to be the only Jewish kid on the block anymore.

And so I accepted an offer from American University in our nation’s capital—affectionately dubbed “Gay Jew” (or at least it was called that when I attended, 1997-2001!). At American, I found myself part of the crowd—religion often came up in conversation (as did politics, internship opportunities and study abroad plans). Suddenly, being Jewish bonded me to others. And later my freshman year, I even dated an NJB (Nice Jewish Boy) for a few months.

I finally felt like I belonged at AU, like I was among my people. And though the university didn’t close for the High Holidays, many professors canceled class, either for their own observances or because they recognized many students would be going home to their families. Instead of being singled out at American, I felt accepted, not having to explain at length why I couldn’t present a group project on Rosh Hashanah. It was just understood.

I didn’t realize just how much that understanding meant to me until I entered the working world in D.C. after graduation. I was naive and didn’t know how things like vacation time/PTO worked–or that they’d vary depending on company. I [wrongly] assumed that I’d be able to take my religious holidays off as personal days, no big deal.

So you can imagine I was none too happy when I learned I’d have to take PTO for the Jewish holidays, as at this particular company, sick, vacation, personal and religious holidays all fell in one PTO bucket. It didn’t seem fair to me when I’d be perfectly willing to work Christmas Day and Christmas Eve—which were considered company holidays.

It was a poignant reminder that, once again, I was back to being in the minority—even in a culturally, religiously, ethnically diverse city like Washington, I still had to “explain” myself.

Years later, when my husband (who isn’t Jewish) and I moved to Kalamazoo for his job, I told my parents, “GREAT. I’ll be the only Jew in Kalamazoo!” And it sure felt that way for a while. My one Jewish friend here was my friend Dana in Chicago, two hours away. But then my husband introduced me to his new colleague, Emily—and said, half-kidding, “She’s Jewish and has curly hair, too; you’ll be best friends!”

And he was right. She is one of my best friends, to this day.

When the ad agency I worked for was acquired by a global marketing firm a couple years ago, one of the best changes to come out of the acquisition was that now religious holidays are counted as personal days, versus PTO. Though I’m still the only Jew in our Kalamazoo office, I no longer feel “alone,” or like I have to explain myself, knowing this is an across-the-board policy.

Which brings me to present day. Our 5-year-old daughter Maya is really into the Jewish holidays, traditional foods and singing the songs I’ve taught her. She can begin Hebrew school this coming fall, and I’m excited to begin her formal Jewish education—but I know how small the Jewish community is here in Kalamazoo. It’s just a tad bit larger than my hometown community was, and I worry about how she’ll feel, being one of just a few Jewish kids in her elementary school.

While I’ve always been proud of who I am and love our faith and its teachings, I remember that hard-to-explain, nagging feeling of not belonging growing up… and it plagues me. Though I know as parents, we shouldn’t project our emotions onto our kids, it’s hard not to when experience is tainting how we feel. Fortunately, the synagogue we will be joining has a lot of young families and even some interfaith families like ours—so I am sure we will get some guidance from those who have gone before us. But it’s hard living in a community where we really are a minority.

It’s my hope that I can instill in her that being “different” is what makes her special—what makes her (and our family) interesting and unique. We might have to explain ourselves to some people, especially living here in the Midwest in a city without many Jewish families, but that’s OK. Who knows, maybe she’ll find her place in college, just like her mama did.

Melissa Henriquez is red-headed Jew from Jersey who married a wonderful dark-haired Catholic guy from El Salvador. They met in college, endured several years of long-distance love, married in 2006 and now live in Michigan with their two wonderful children: Maya (7) and Ben (4). By day, she is a marketing manager at a global marketing agency and by night she blogs at Let There Be Light (est. 2008). Melissa’s writing has been featured on Babble.com and The Huffington Post.