I Want My Kids to Feel “Jewish Enough”

How did this happen? How did almost three-and-a-half years go by? Wasn’t I just in the delivery room waiting for Helen to be born? Now I have two little ones, and even though the birth of Alma was just as special, it was the birth of Helen that changed me forever. I know this because shortly after Helen was born and I went back to work, I feared being mugged. I’m from Brooklyn. I’ve been mugged a lot, especially as a teenager. But after Helen was born I constantly feared it. Then, shortly after Alma was born I feared getting into a car accident, having a heart attack, a stroke or contracting a deadly disease. I called my cousin: “Why do I feel like this?” I cried. “Because you’re a mother. Welcome to worrying for the rest of your life.” It was true. With the births of my children I had become, well, kind of a lunatic. 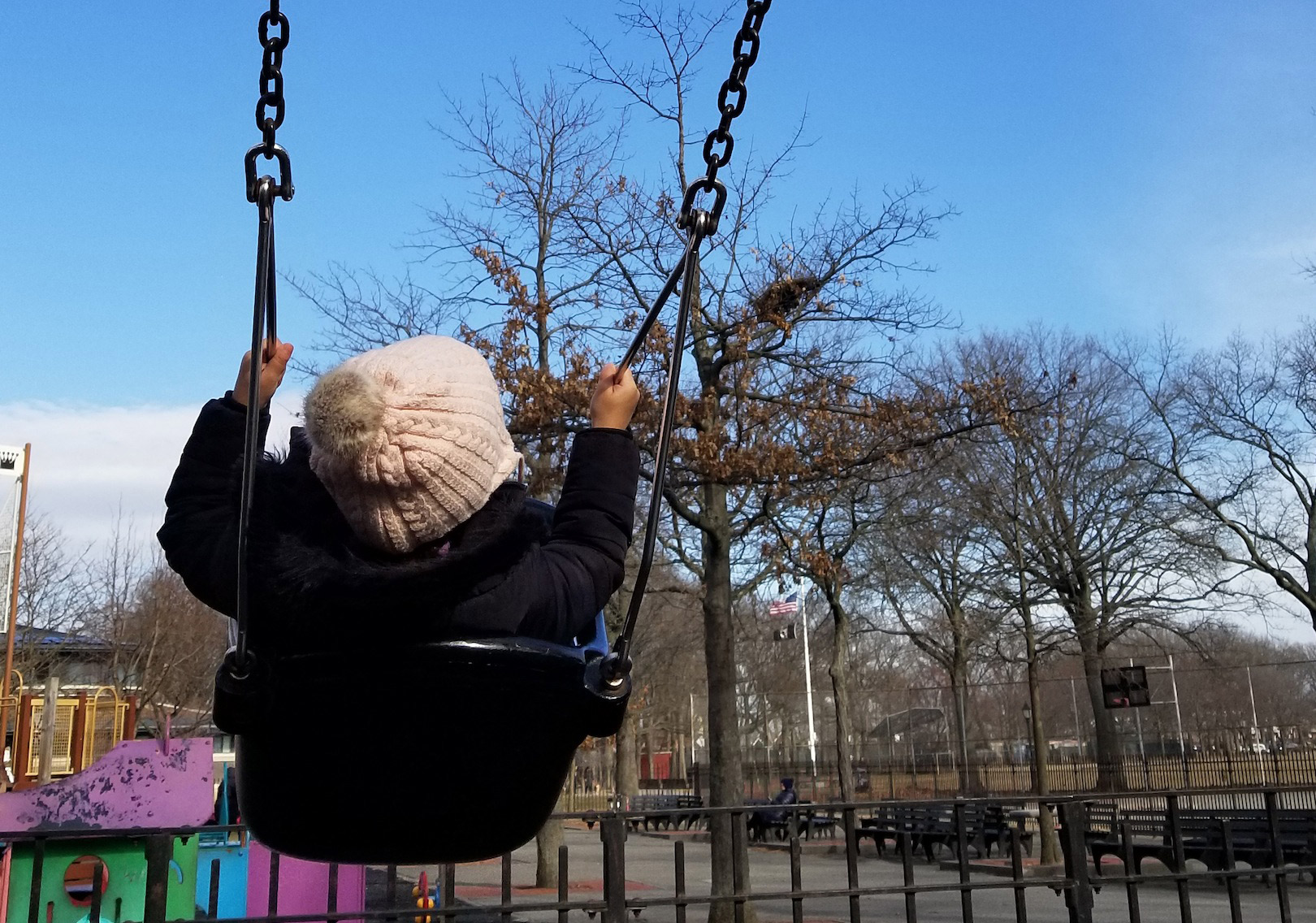 But now it’s something else. Now Helen is three-and-a-half. Next year she will go to school. On Sundays she takes ballet and this evening after dinner, as if she were a teenager she asked, “Mami, can we do a video call with Grandma?” Grandma lives down the street. But, now I’m adding Judaism to my worries.

I am proud to say that I am raising my children with my soul mate, Adrian. He is Mexican-Catholic and I am American-Jewish. Even though Adrian’s mother goes to church every Sunday and we celebrate all of the Catholic holidays, I was raised in a stricter, religious environment. I learned to write Hebrew in pre-K, I started learning Torah in Kindergarten and my neighborhood growing up (the same neighborhood I live in now) was and still is a black hat, Orthodox Jewish neighborhood. So a few things are happening now that I don’t know how to feel about.

For starters, when filling out the school application in NY, I was asked to list the schools that interest me. My application is still open on my desktop because I hovered over the Jewish day school option. Most Jewish day schools in my neighborhood are Orthodox and although I am proud of my interfaith family, I am realistic about the criticism that comes from within my community. It’s surprising, but even in New York there aren’t so many school options for progressive Jewish/interfaith families. Where does one send a ballet-loving Mexican, American, Catholic Jew to pre-K? I’m convinced there is a school somewhere in the shape of a taco and their playground looks like a knish and all through the hallways children draw pictures of Jesus hugging a rabbi. I haven’t found this school yet, but if it exists it has to be in Brooklyn, right?

I want Helen (and Alma when she goes to school) to learn everything I learned, but not in the harsh way it was shoved down my throat. Is that possible? When you gain one thing do you always give up another?

Helen knows the Hebrew alphabet. That’s a good start. But, the other day something strange happened. Helen had a play date with the daughter of one of my former students. My former student is from Israel. She isn’t so religious but she’s kosher and she’s also not non-religious. Everything was fine until we got on the subject of Shabbat. My student asked if I did a Shabbat dinner. When I said no I got very down on myself. Why wasn’t I doing a Shabbat dinner? My student then asked me something about Adrian and it occurred to me that I never told her he is Catholic. It wasn’t because I didn’t want her to know, it was because I never think it’s something out of the ordinary. But suddenly faced with the question of Shabbat dinner and the realization that my student might think I am Barbra Streisand in Yentyl, I began to feel like a failure. 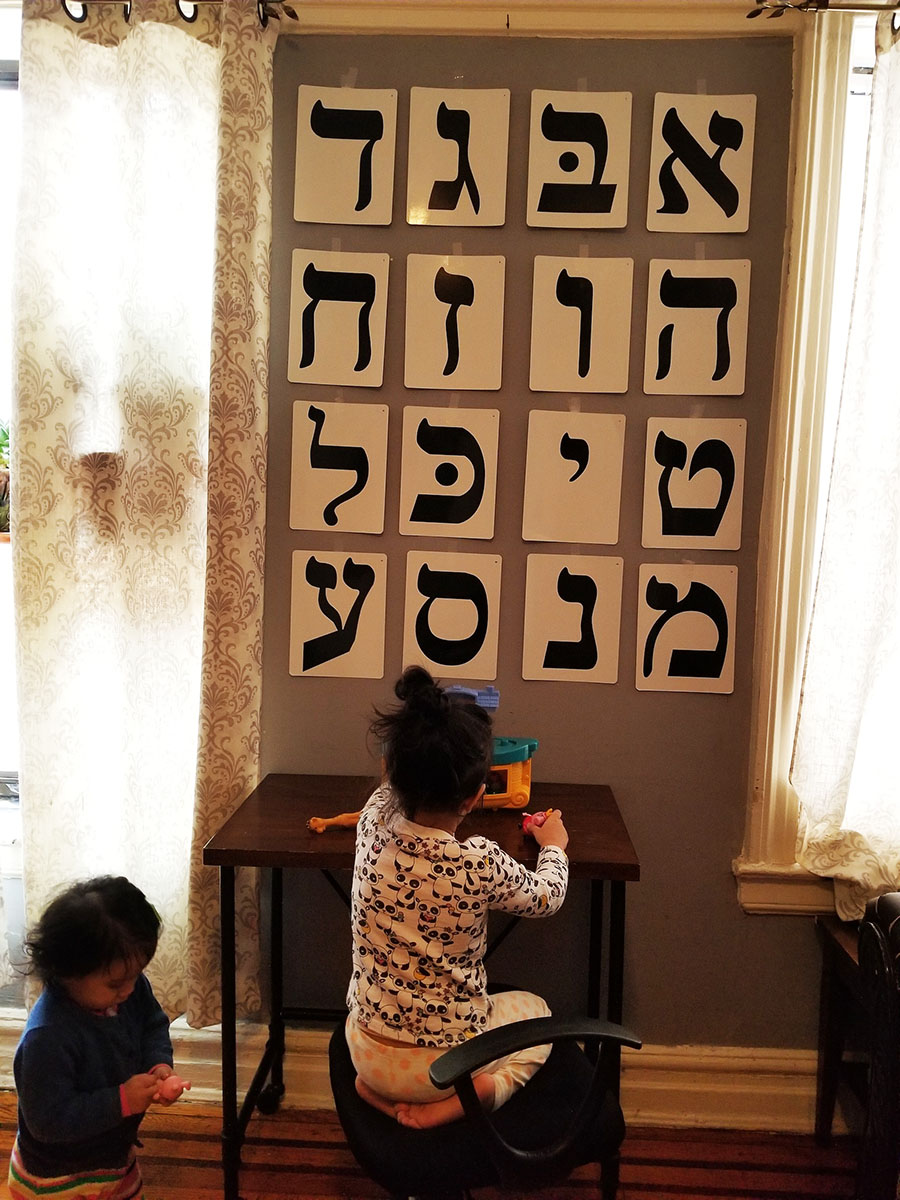 It gets worse. When I had the opportunity to say, “By the way, my husband’s not Jewish,” I didn’t say anything. I’m still trying to figure out why. Some of it is because of my own past. The shame I felt at friends’ houses when they realized my family wasn’t religious. The deeper shame I felt when friends invited me over because they knew I could switch on the television for them on Saturdays (an act forbidden to observant Jews during the Sabbath). But I also don’t ever want my Helen or my Alma to feel that way. I don’t want them to feel the need to compete for how Jewish they are. I also don’t want them to hide their Catholicism.

So, how did this happen again? When did motherhood and decisions and God and faith and being terrified every second of every day kick in? I was the girl who got kicked out of Yeshiva and really wanted an AC/DC-themed bat mitzvah. Now I’m the mother who hovers over school options with the arrow on my computer screen. Now I’m the woman who gets intimidated by former students because of how “Jewish” they are. Now, I’m the lady in the kitchen at midnight trying to figure out what the best way to marinade a chicken is, because we’re having Shabbat dinner at my house on Friday, and all the apostles are invited.